At 7 am on Friday, we walked back to the Chinese customs area, which was located about 100 yards from our hotel.

The trucks with our cars were still sitting at the customs entry point, but at 7:50, we watched them roll into a holding area on the Chinese side. At that point, we were confident that the cars would be in our hands soon. 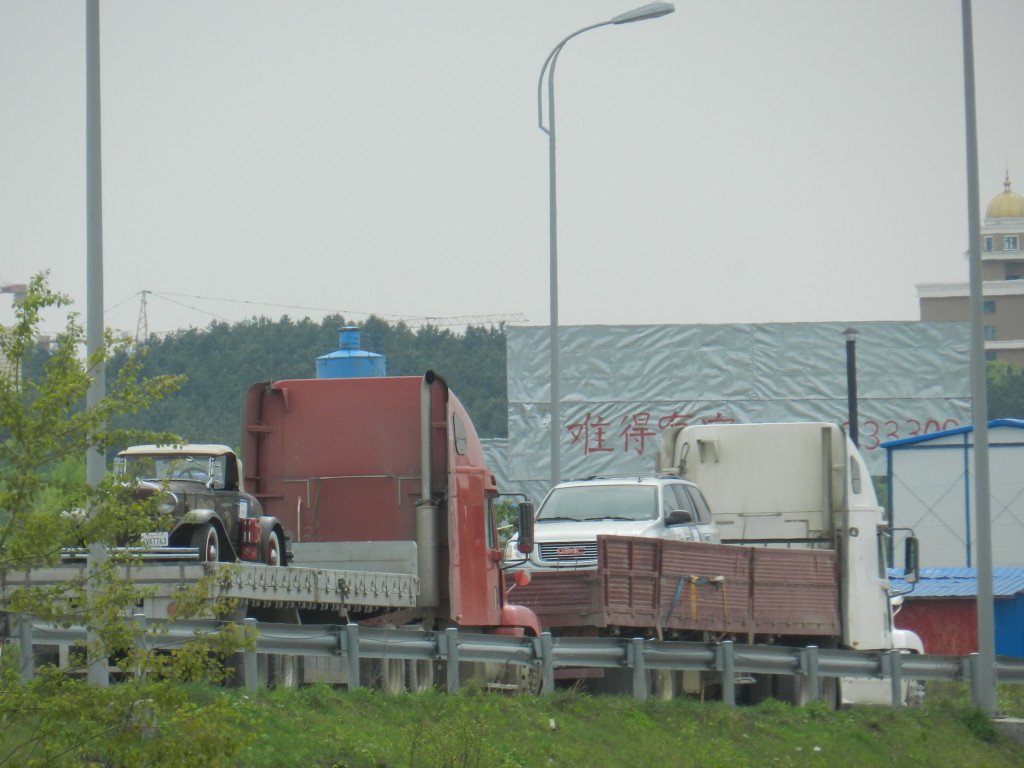 The Harbin office that had to release the cars didn’t open until 9, so we went back to the hotel for a quick breakfast and then caught a cab to a hospital in Suifenhe so we could complete the medical paperwork for our Chinese drivers licenses. The hospital was brand new, with gleaming blonde marble floors. We took an escalator to the second floor and entered a small office where we each took a color-blindness test and then we were on our way to the police station to get the licenses. We were in and out of the hospital so fast I didn’t even have a chance to take any pictures.

At the police station at 9:30, we entered an area labeled “Traffic Police” that anyone who has a drivers license in the U.S. would instantly recognize as a DMV. Our guide, Sim, gave our license and medical paperwork to two of the officers behind a counter, and we handed over our passports. While the paperwork was being processed, a driving school teacher gave us a short lecture on Chinese traffic laws, which are nearly identical to U.S. — use your seat belt, no drinking and driving, no cell phone while driving. A few differences — all cars must carry warning signs to post during a breakdown and a fire extinguisher, and you aren’t supposed to drive for more than four hours on an expressway (three hours on a back road) without a break.

At 10:05, Sim received a phone call to confirm that we had a loading dock available to get the cars off the trucks, and we had our “provisional licenses” by 10:30. I was amazed at how smoothly everything was going.

And then the process ground to a halt. 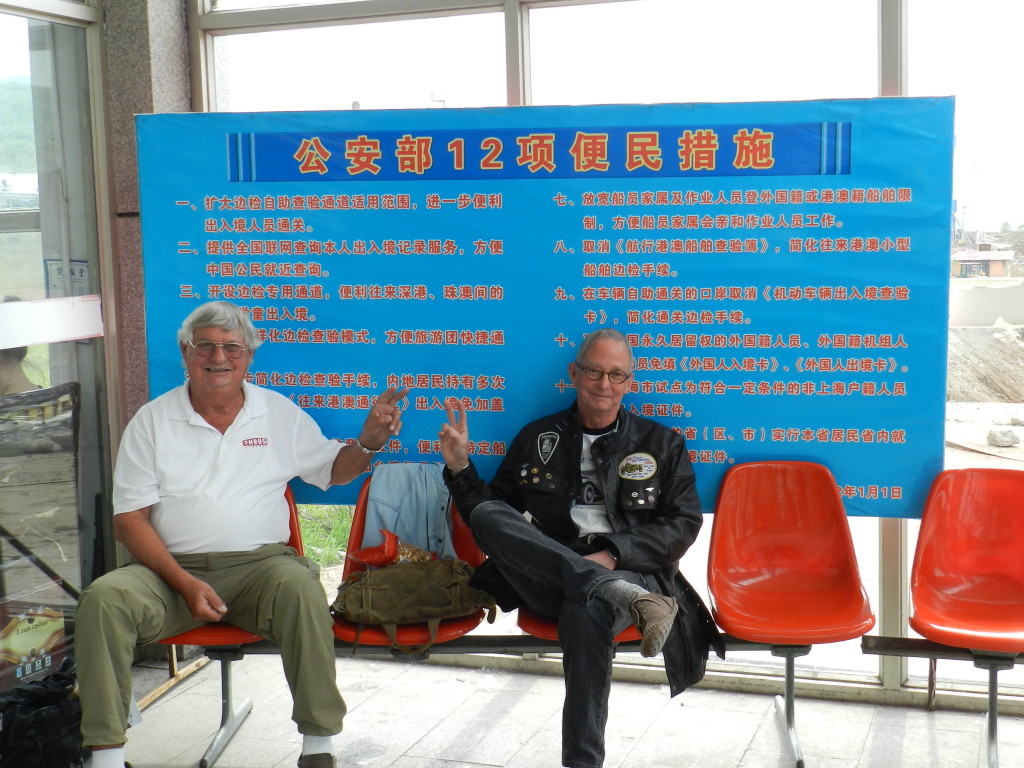 At 1:15, Sim had still not heard from the customs office, so we walked back over and found that the Harbin office was closed until 1:30 for a lunch break. Thinking we would hear something soon, we wandered about the customs area, looking at the wares offered for sale — mostly liquor, jewelry, lighters, and small tools — and Luke played a variation of Hacky Sack with some of the bored vendors. Here’s the “dart” they used instead of a Hacky Sack: 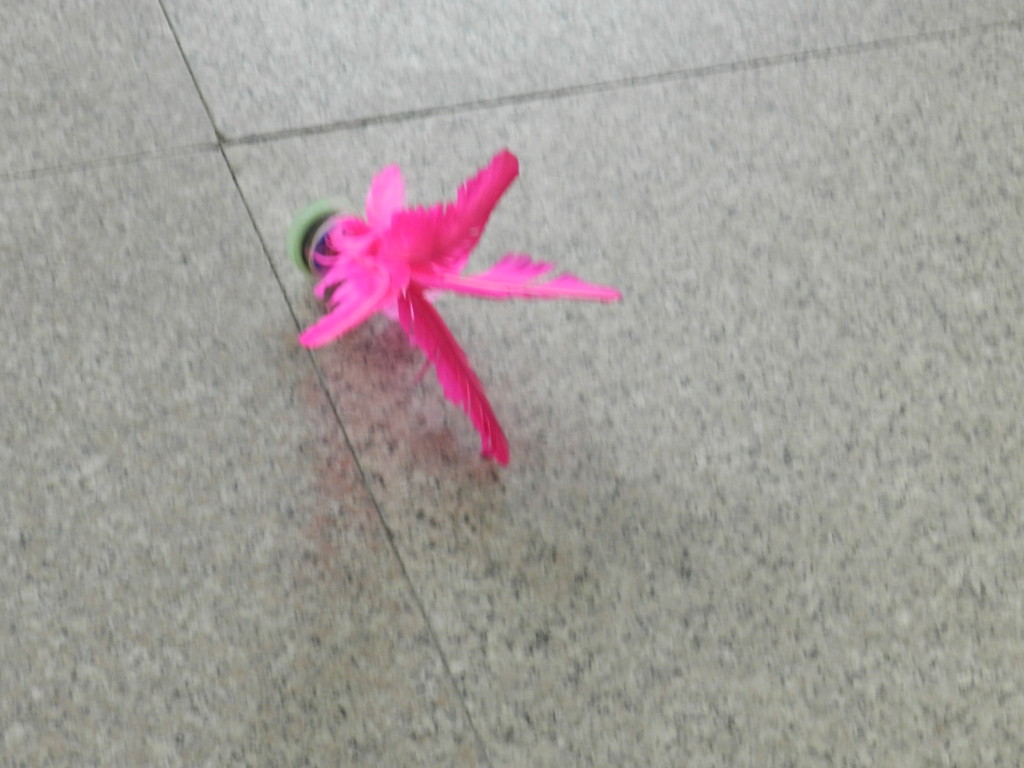 By 3:00, we were getting worried — once we got the cars through customs, we still had to unload them and take them to the police station again to complete the final paperwork, and the traffic police stopped working at 5 p.m. John, Leo and I lounged in a lower level of the customs area, while Luke went to drop some purchases he’d made in his room and to look for some ice cream.

A few minutes after Luke left, Sim came running down the stairs and said things were moving! The three remaining musketeers dashed up the stairs and followed Sim through a maze in the back of the customs building and into the holding area with the trucks. The Russian truck drivers, Igor and Yevgeny, were very happy to us! While we waited for additional paperwork to be completed, the drivers affixed some stickers to the cars and signed them: 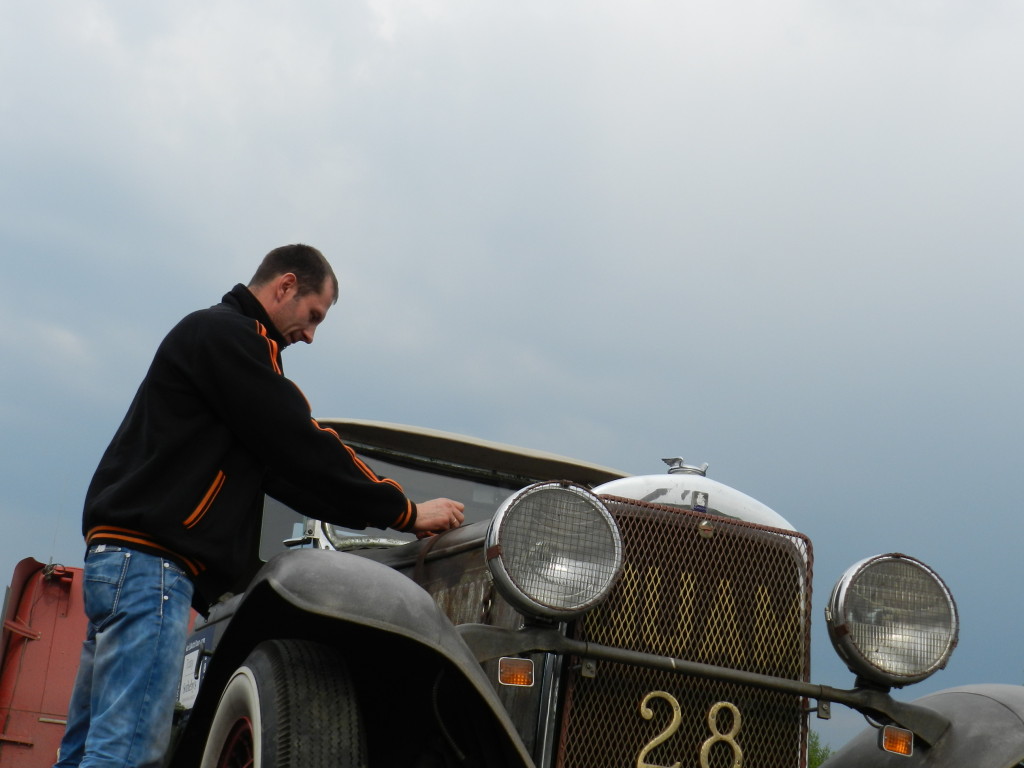 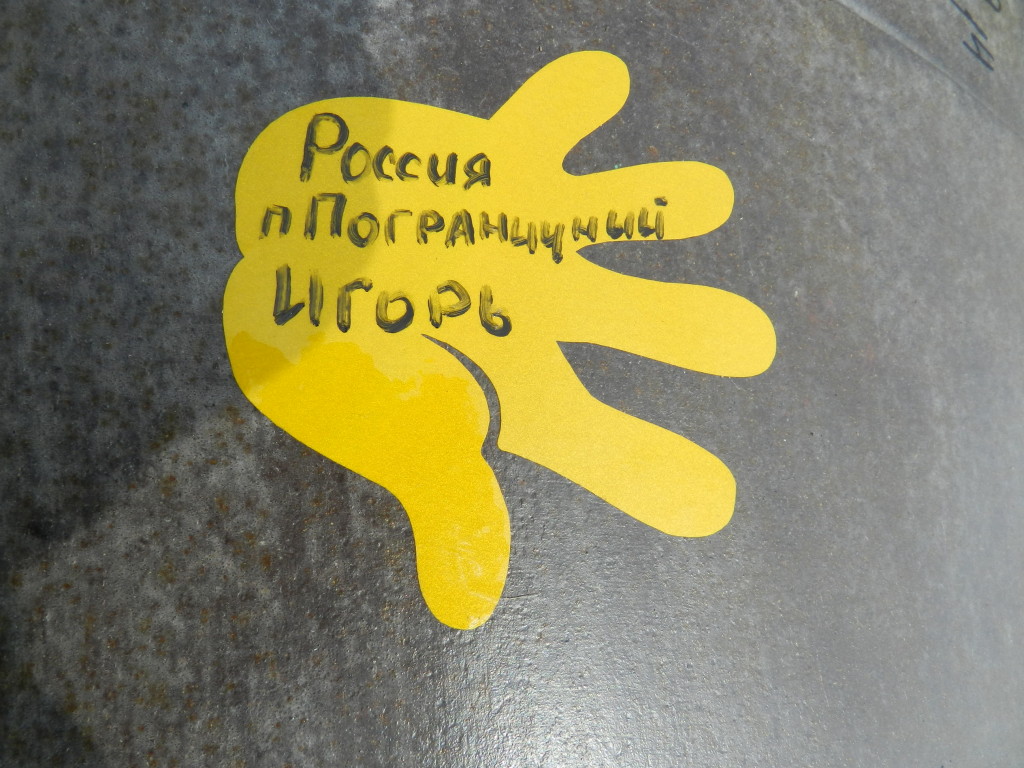 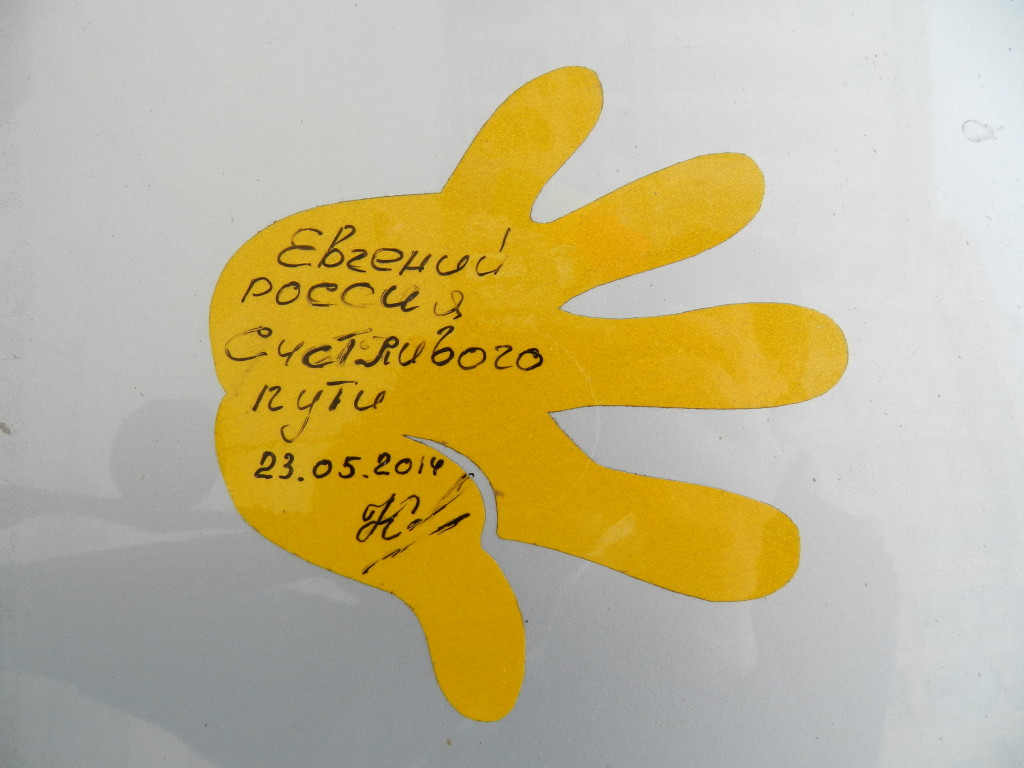 John and I climbed into Igor’s truck with the Roadster, and Leo and Sim got into Yevgeny’s truck with Leo’s GMC Envoy. And then we sat. And sat. And sat. Except for some taxis, nothing seemed to be moving in the customs area. Sim got out of his truck and yelled into his phone while making chopping motions with one arm. Finally, a customs inspector showed up and took some paperwork inside to a small blue building, and Sim walked back to our truck and said the police were coming to inspect the cars. We pulled up a few feet a past another gate at 3:58. At 3:59, the traffic police arrived, jumped on the trucks to inspect the cars, and at 4:09 we slipped through the last customs gate.

We drove about a mile to a loading dock, and the first thing I noticed when I got out of the truck was the Tibetan dog that barked constantly and looked ready to kill all of us if it got out of its cage. Yevgeny maneuvered his truck into place, and Leo drove his car onto the narrow loading dock: 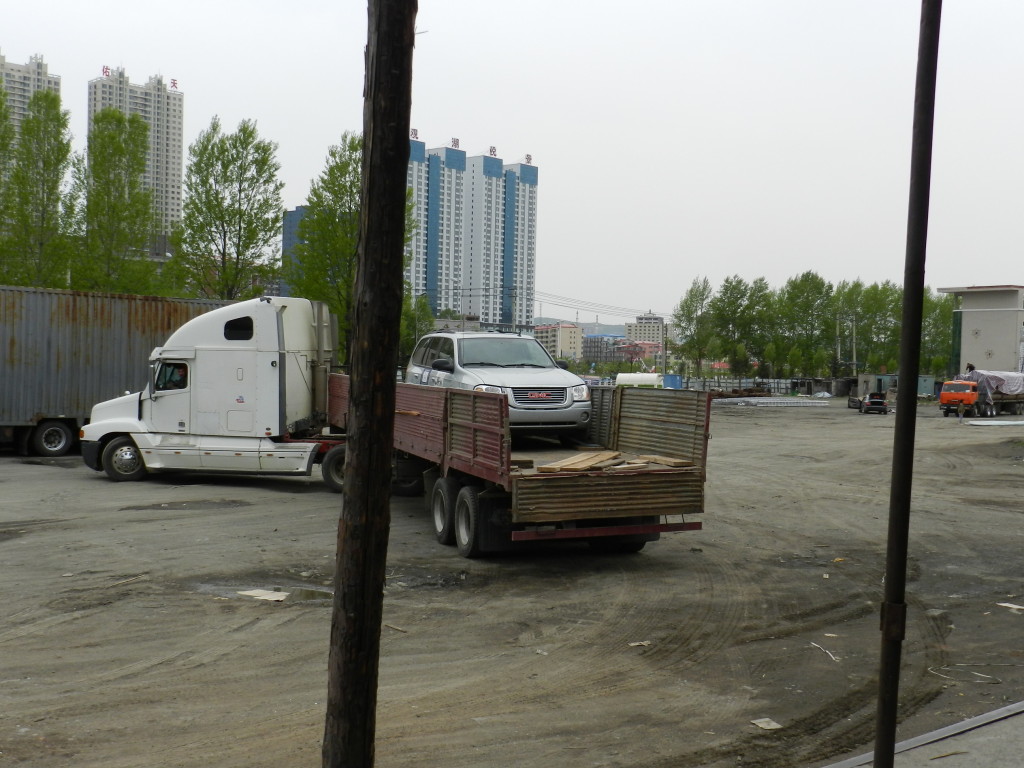 Yevgeny backing up to the loading dock (Eileen BJorkman photo)

Then Igor backed his truck up to the dock, and we thought we were home free. Just then, a man came running over and began screaming at the truck drivers. I couldn’t understand a word he said of course, and I don’t think the drivers did either, but it was obvious he was mad we were using the loading dock. The drivers shouted back in Russian and for several minutes it looked like we might have to find another loading dock.

I’m still not sure what happened, but at 4:30 Igor jumped back into his truck and repositioned it while Yevgeny put his arm around the furious Chinese. Somehow all this worked, and John began to drive his car onto the dock. By then we were surrounded by a crowd that came out of nowhere and included a woman carrying baby who had climbed onto the dock and was now filming the operation with her cell phone. I had no idea that a loading dock could be such a hotspot on a Friday afternoon. 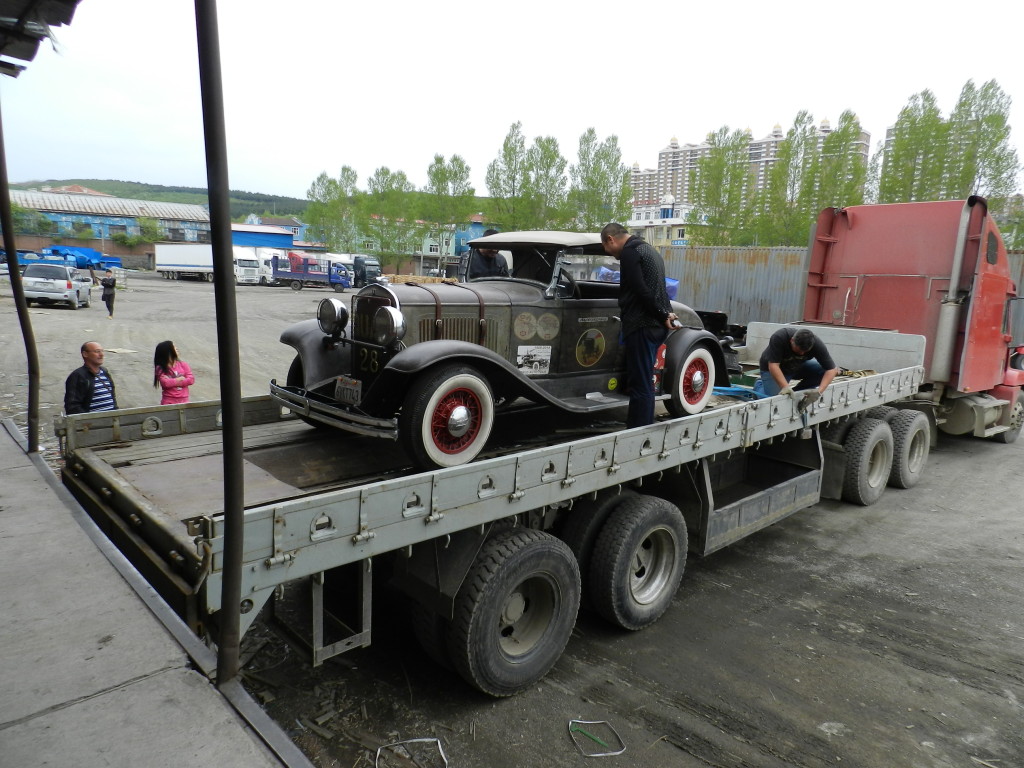 Getting the Roadster (Eileen Bjorkman photo)

We managed to shoo away the onlookers long enough to get the Roadster onto the ground at 4:35, and were besieged by people who wanted to touch it and get their pictures taken.

But Sim ran over and said, “No, we need to go to the police station still!” I was confused — I thought the police had finished everything at the customs area. Sim didn’t know the way to the police station, so we went back to the main road and he hailed a cab. We followed the cab in the cars and at 4:50, we were flying back down the stairs into the traffic police area to finish the paperwork.

At 5:25, we walked out the door carrying our new Chinese license plates: 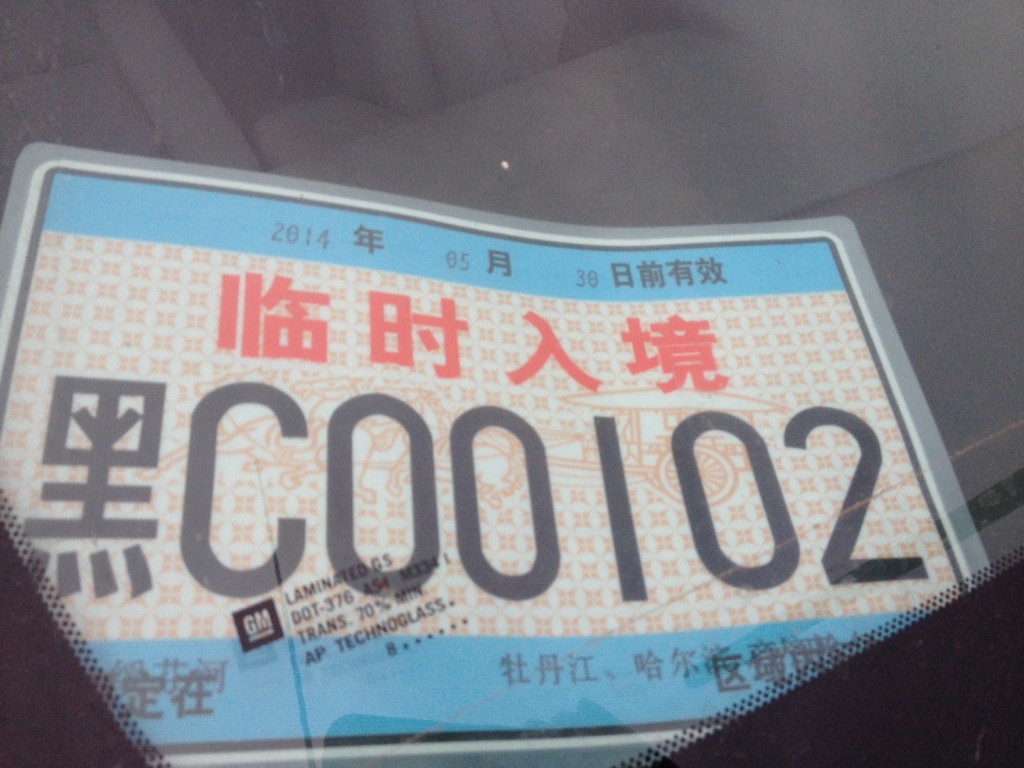 Many, many thanks to all the people who made this happen — Sim, the customs folks in Sifuenhe, the truck drivers, and the traffic police who stayed late. I’m sure there are many more who helped as well that we aren’t aware of!

Next up: The drive to Harbin and tour of the city.

By the way, I did some research and found that the dishes we saw on the Thursday drive are part of the Galenki RT-70 radio telescope.