We had a great drive today, but longer than planned. Since Western S. Dakota and all of N. Dakota basically follows Hwy #12, we decided to make it a long drive day and get to Baker,MT tonight. Unfortunately, Baker was completely booked motel wise due to N Dakota oil field workers, railroad workers and pipeline workers….who would have guessed that all the motels in town have long term reservations for M,T, W and TH nights. Our only choice was to continue west to Miles City, an 80 mile drive, which is much bigger….the problem was the same there, however, after being turned down at 4 motels, we found a room at a Super 8. At this point I would have taken a horse stall as it was by now after 9:00PM.

This will be a short post as I’m really tired, but wanted to share one great story today and a few photo’s of the back roads .

So, after some great gravel road drives we pulled into Ipswich, S. Dakota the home of the YT. We drove by the local Museum, however, it was closed so I took a drive down Main St and found a YT Mural painted on a building. I stopped to take a photo, at which point a lady came running out of a local business and was yelling “oh my god…I love your car, what are you doing in Ipswich? That led to our World Tour story at which point she insisted we go into her store….her name is Glorya Kackman and she owns the Red Bobbin Sewing Salon. Turns out Glorya is a costume designer and her store is a very cool place with all types of different clothing. To make a long story short, we got her to sign the car and had a great time hanging out. Then on the way out of town we found the Ipswich Arch that had been originally located at the entrance to Main St, then moved to Hwy#12, then moved again due to height restriction on the highway and finally to a nearby park. 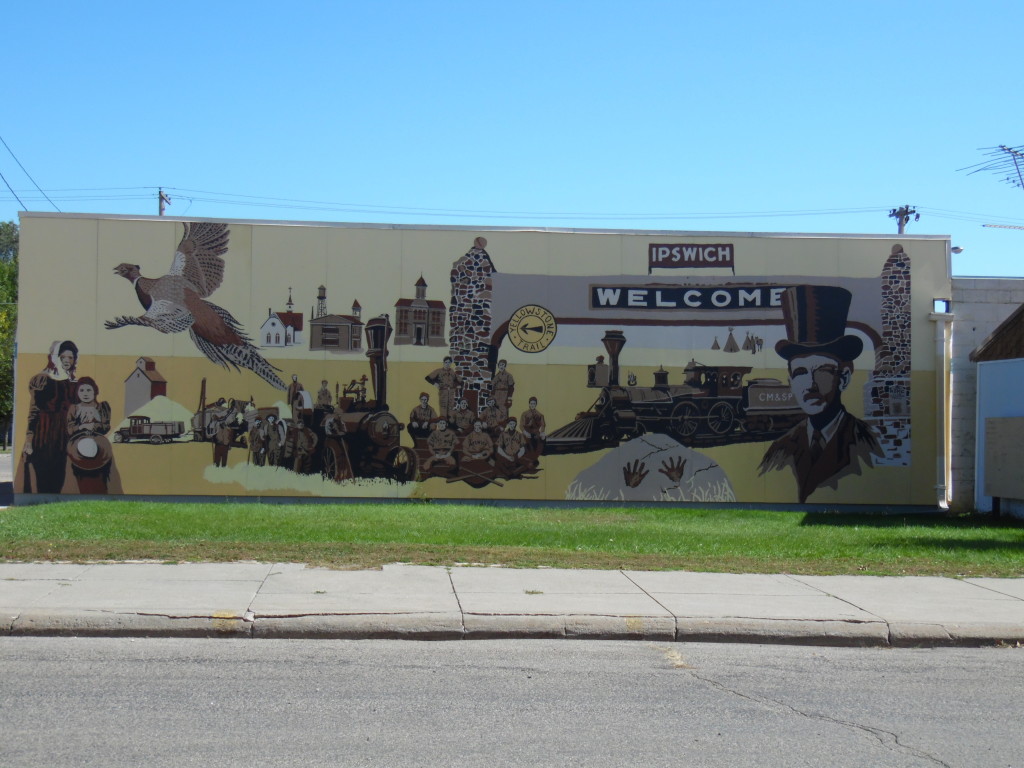 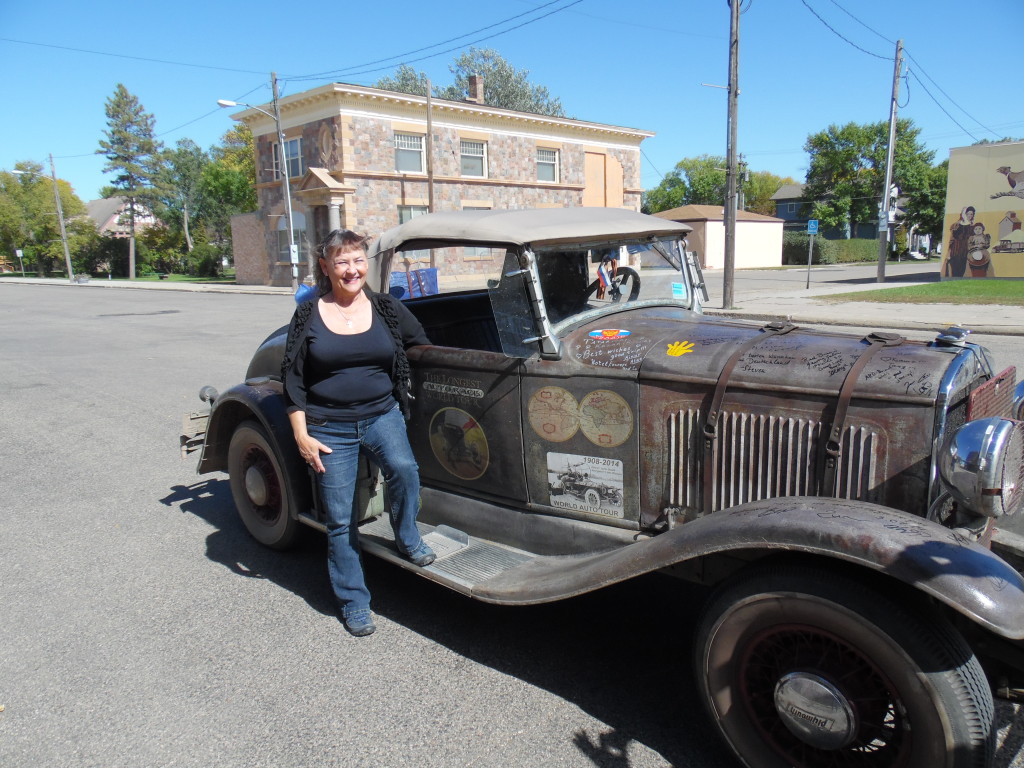 Our new friend Glorya on Main St in Ipswich, SD….she’s really a great very funny enthusiastic lady !!!! She made our day!! 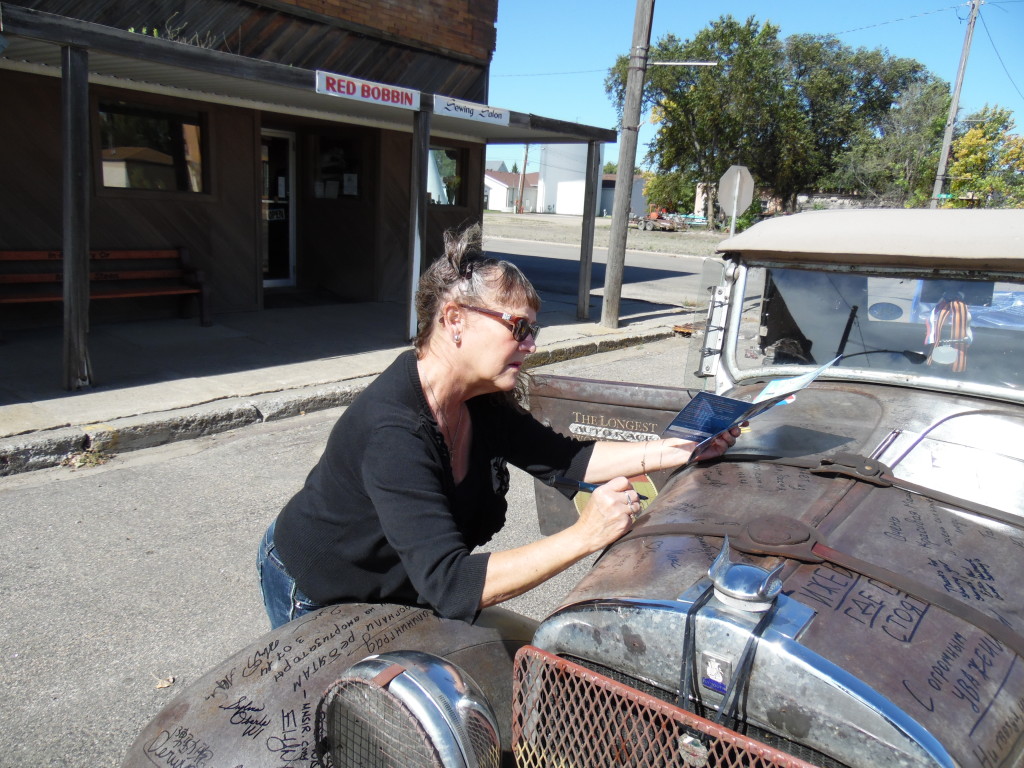 Glorya signing the car…we’re fast running out of room for signing. I told her I should park the car as I was stopped in the middle of Main St…her reply “this is Ipswich…there won’t be any cars coming by here, leave it where it is….you know what, she was right! 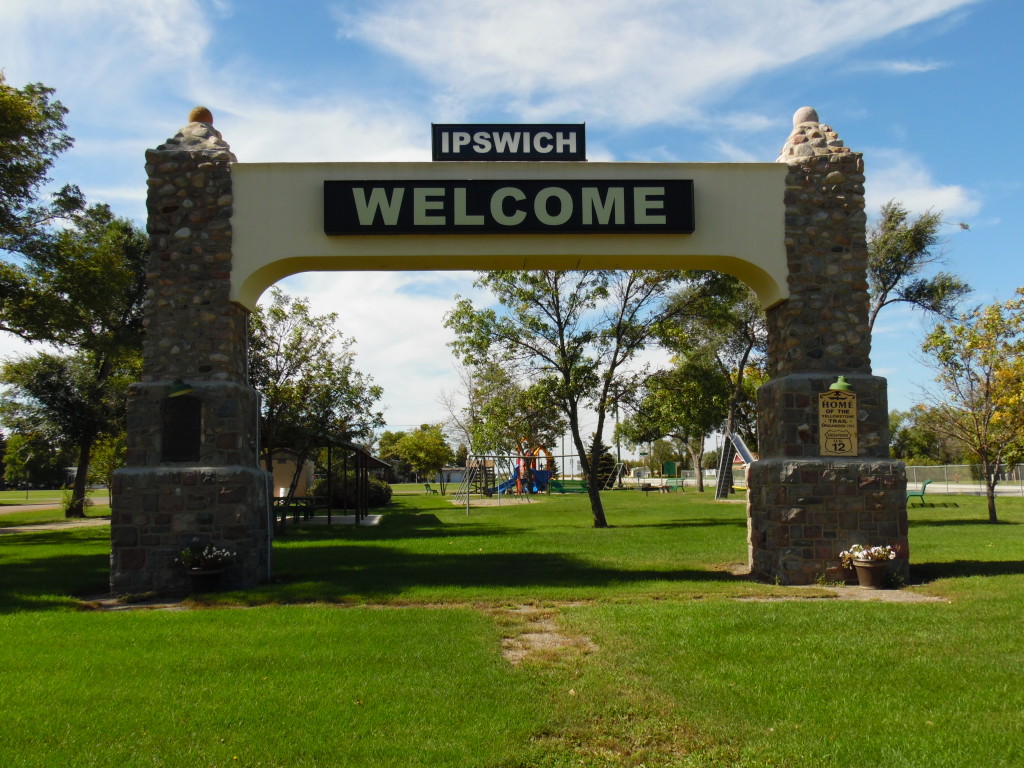 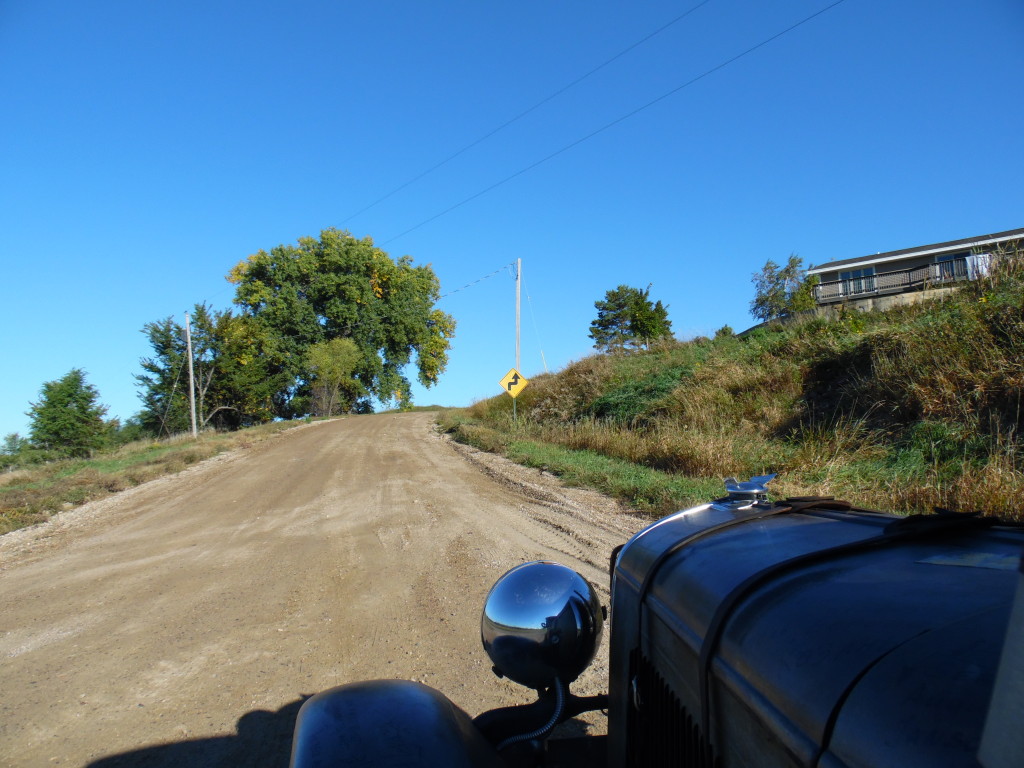 Heading onto another YT back road adventure….

One of a couple historic YT bridges we went under

And finally, our first US Roadster incident….we met a large double trailer gravel truck coming at us at high speed on the highway and just as he passed us we heard a loud pop, and a small gravel chunk hit the windshield creating  a thumb sized rock chip in the windshield….at least it didn’t break it!!! 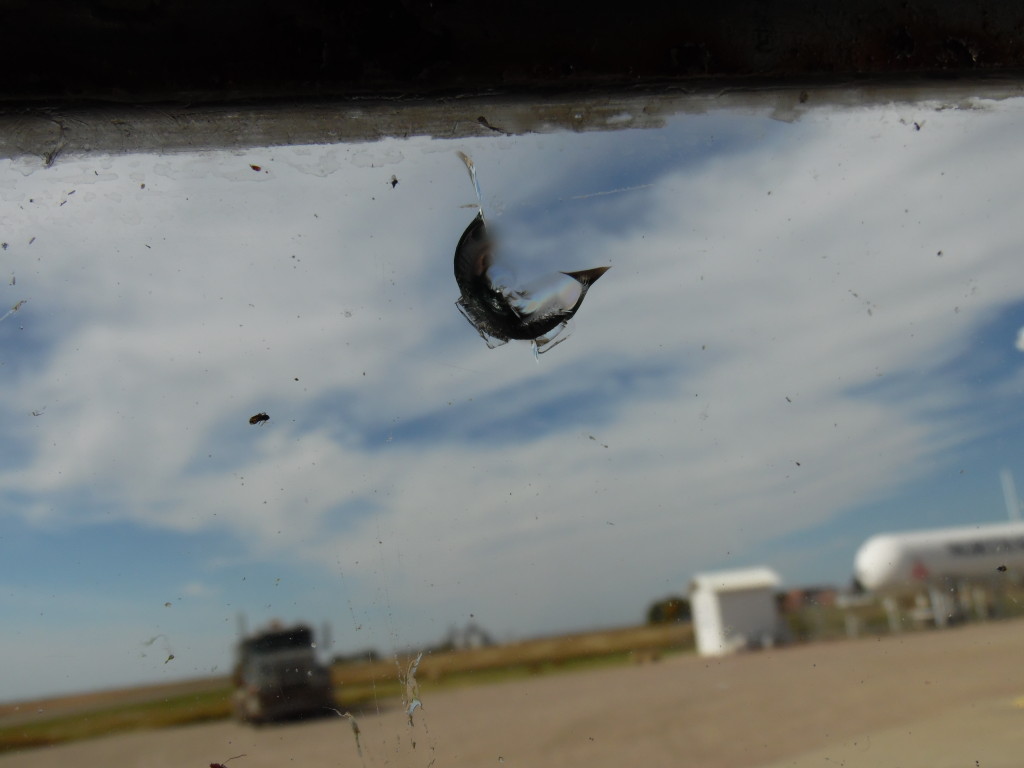 And our final goodbye to the back roads….an eagle nest high in the trees and a herd of buffalo!!!!

An eagle nest, I think, high in a tree… 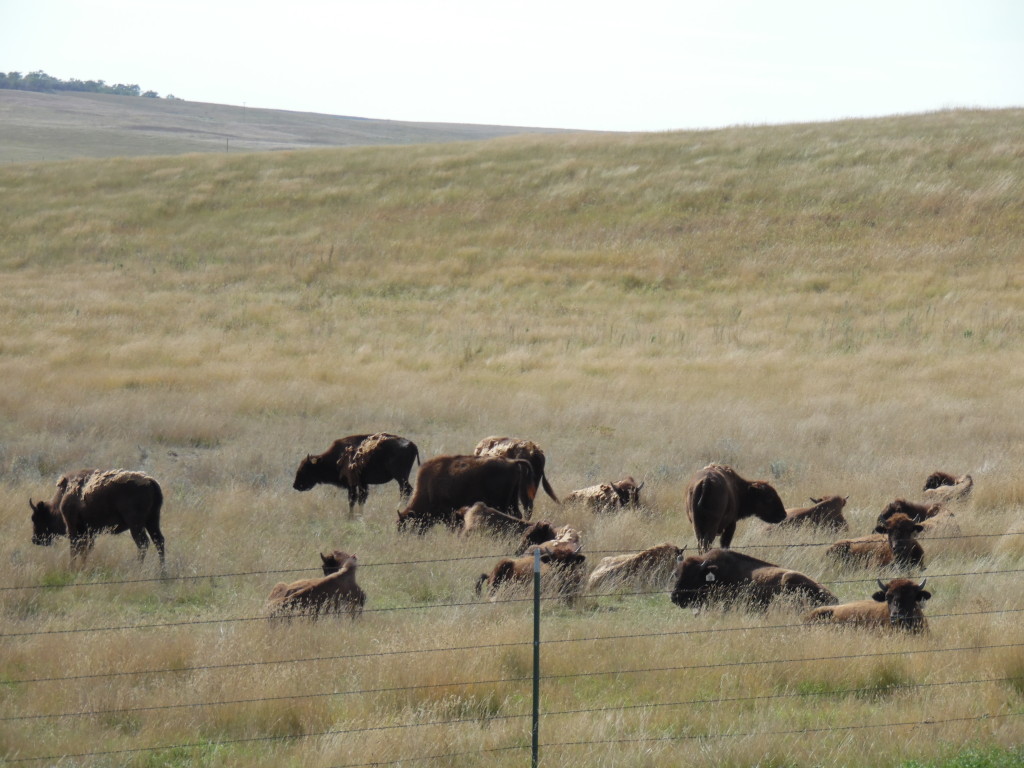 A small herd of buffalo…not something you see everyday ….