We finished the customs process and received our temporary Chinese license plates today at 5:25 pm. Just like in Yokohama, we were getting  a little worried that we might have to spend the weekend in Suifenhe, but our new guide, Sim, made everything come together, so we’ll be heading to Harbin on Saturday morning. But today will be a story for tomorrow — as a preview, it involved a junkyard, barking dogs, a near fist fight, and a woman carrying a baby.

We departed Vladivostok at 7 a.m. Thursday to drive to Pogranichnyy, a town on the Russian border where we were to meet up with the truck drivers who would take the trucks across and where Luke and I would board the bus to carry us across the border. Along the way, we encountered sheepherders, 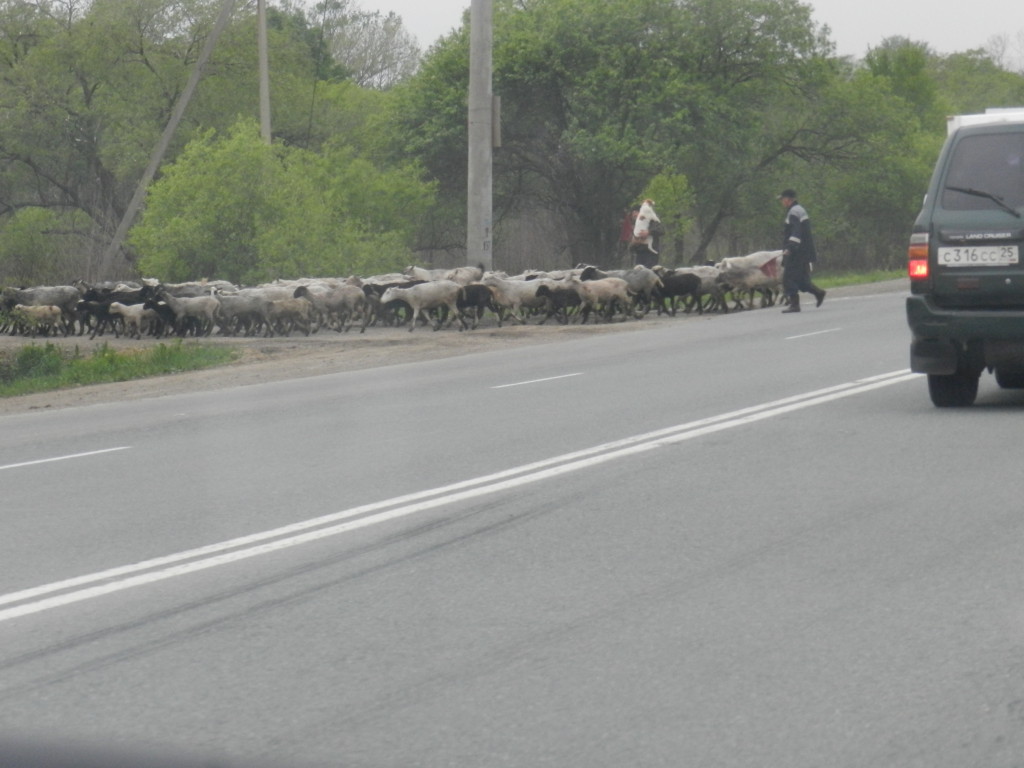 four miles on a gravel road due to construction (which brought back memories of driving forest roads in New Mexico), 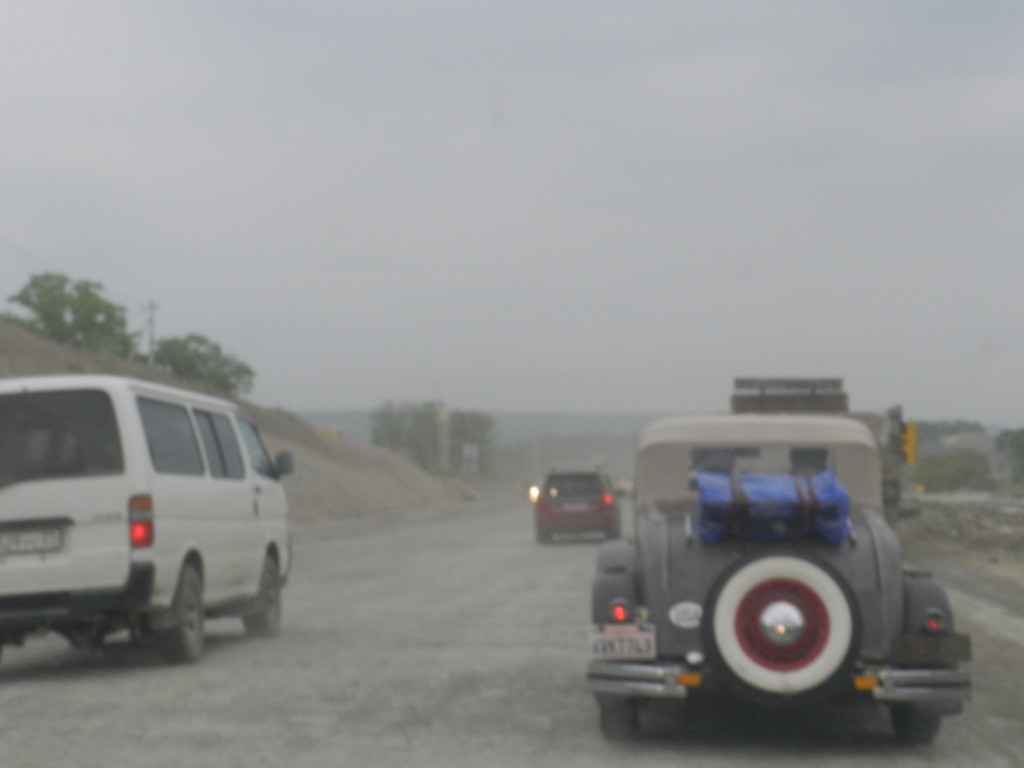 our first fueling stop in Russia, 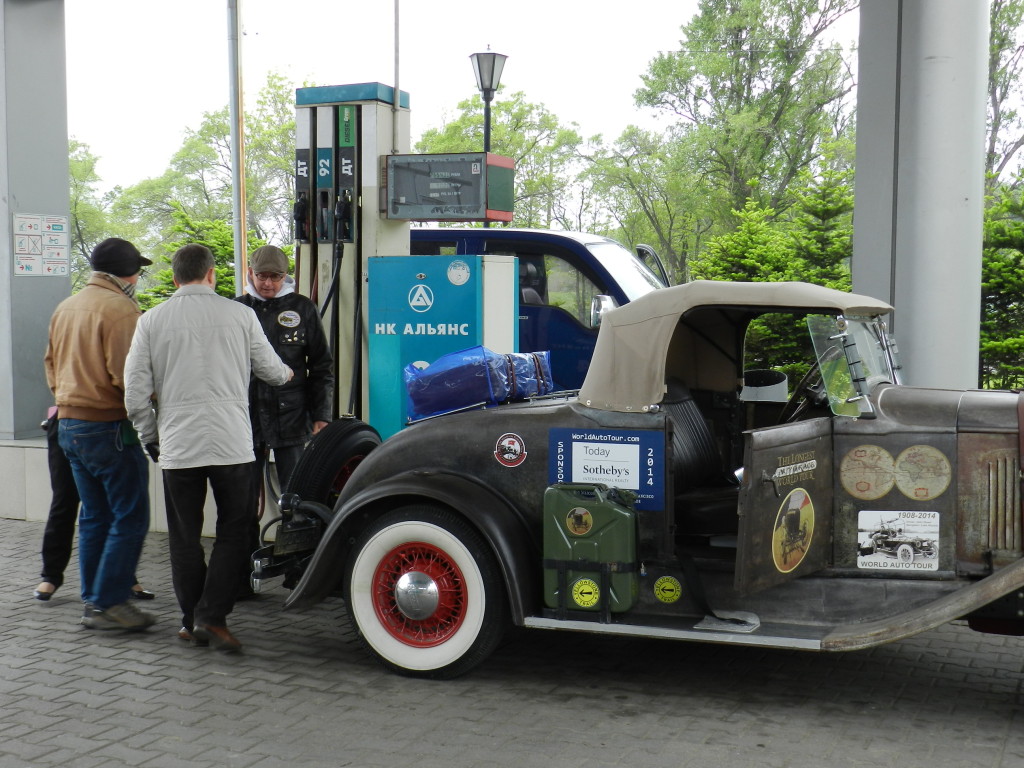 radio telescopes (I think — maybe they’re something else), 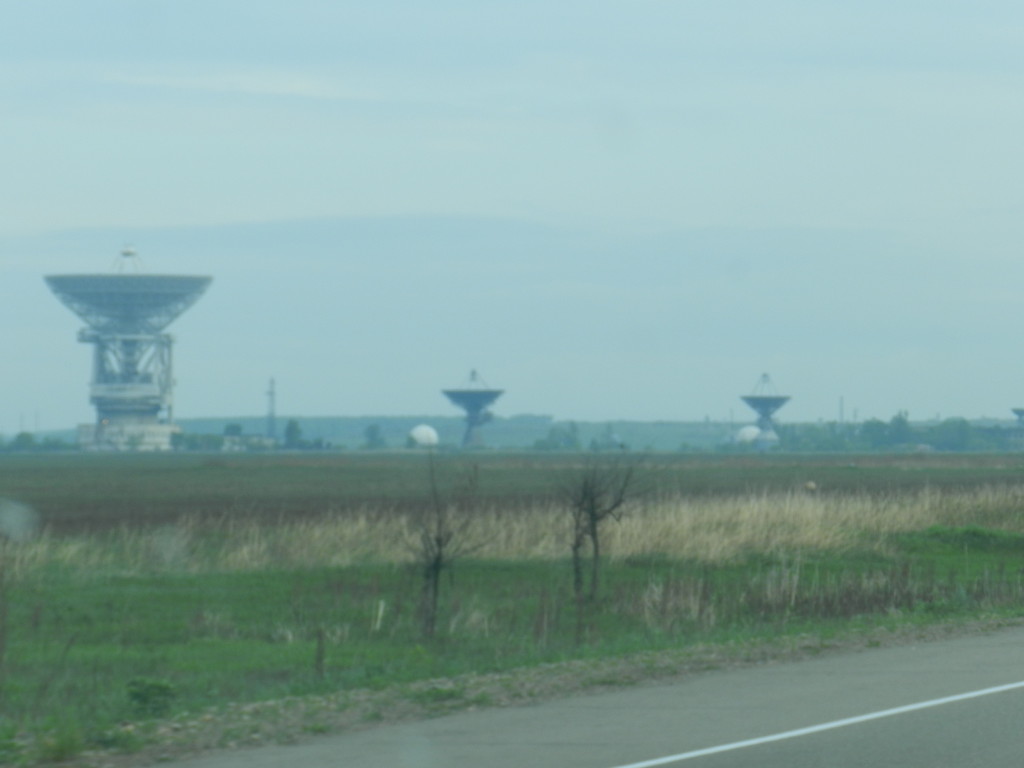 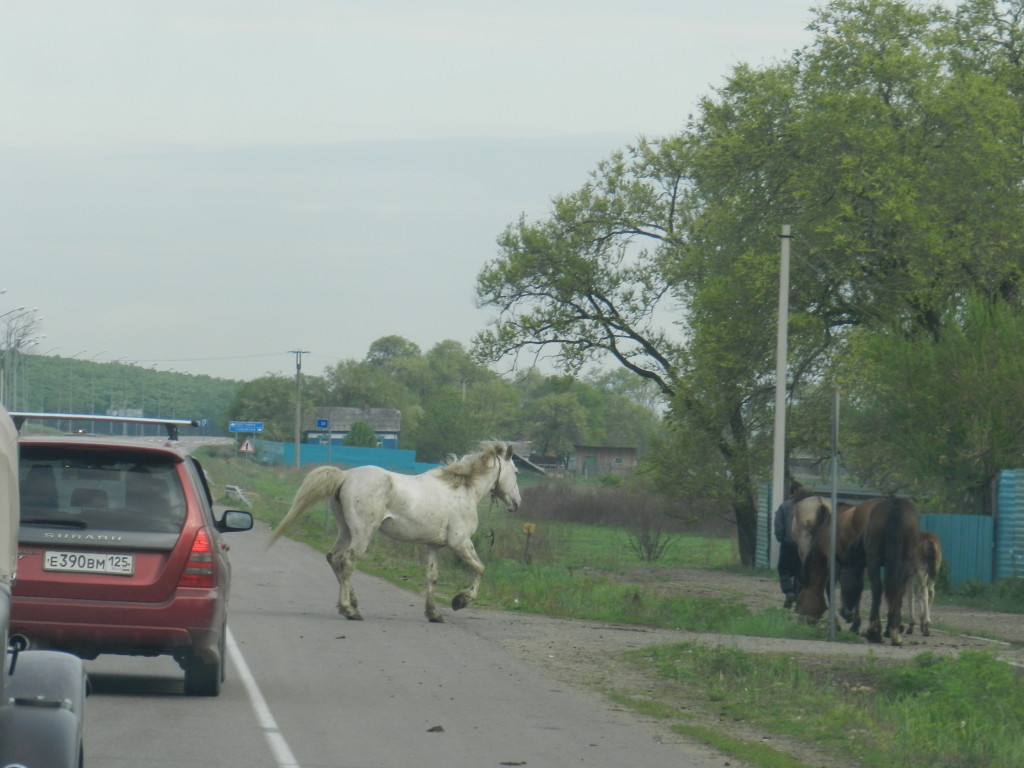 Horses encountered during the drive to the border (Eileen Bjorkman photo) 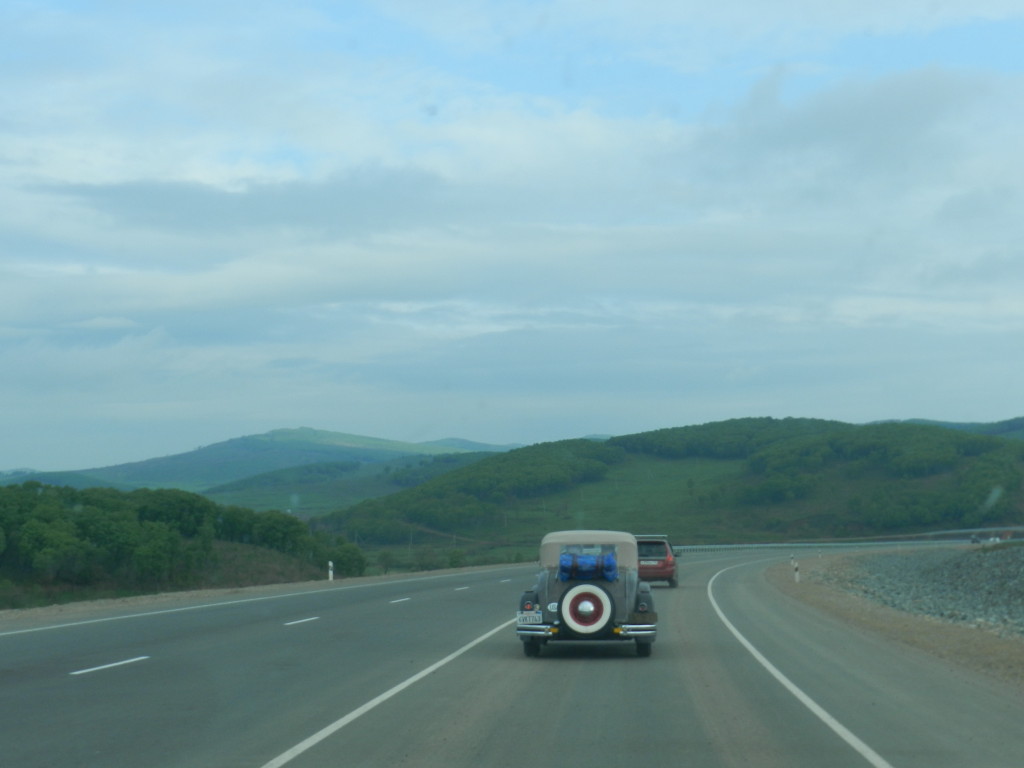 and at 10:30 am, Pogranichnyy, where the Roadster created quite a stir, as usual. We’re getting used to these crowds following us whenever we wander into town. 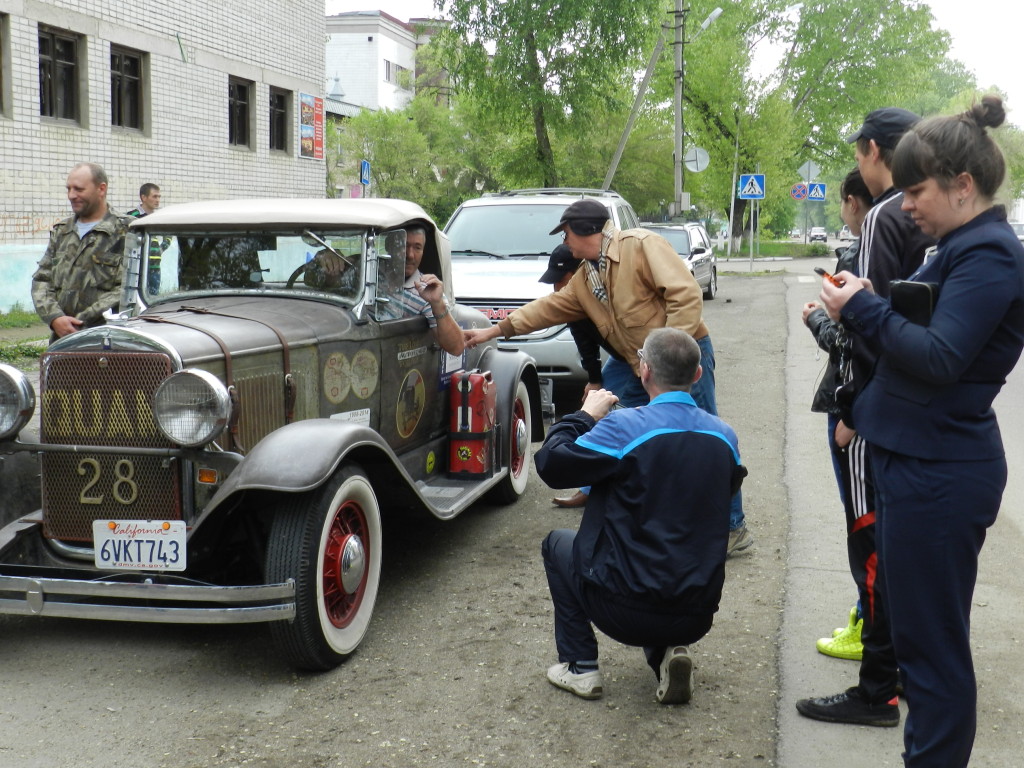 At noon, the trucks hadn’t arrived, and it seemed there was some sort of problem. We headed to a restaurant for some Chinese food, and then at 1300 Svetlana got a call and we dashed to the cars and drove north back out of town to meet the replacement trucks. The first truck arrived, and it wasn’t of the “rollback” type we thought we were getting, so there was no easy way to load the cars, especially the Roadster. This was the picture in the previous post.

After an hour of discussion about forklifts, containers, two simultaneous cranes, car lifts, and other ideas on how to levitate the cars onto the flatbeds, we decided we needed a loading dock. So Svetlana took off with one of the truck drivers and they investigated every possibility in town — each one wasn’t quite right, but they each directed her to another facility that might work.

In the meantime, I went for a short walk and snapped a picture of this pretty kitty: 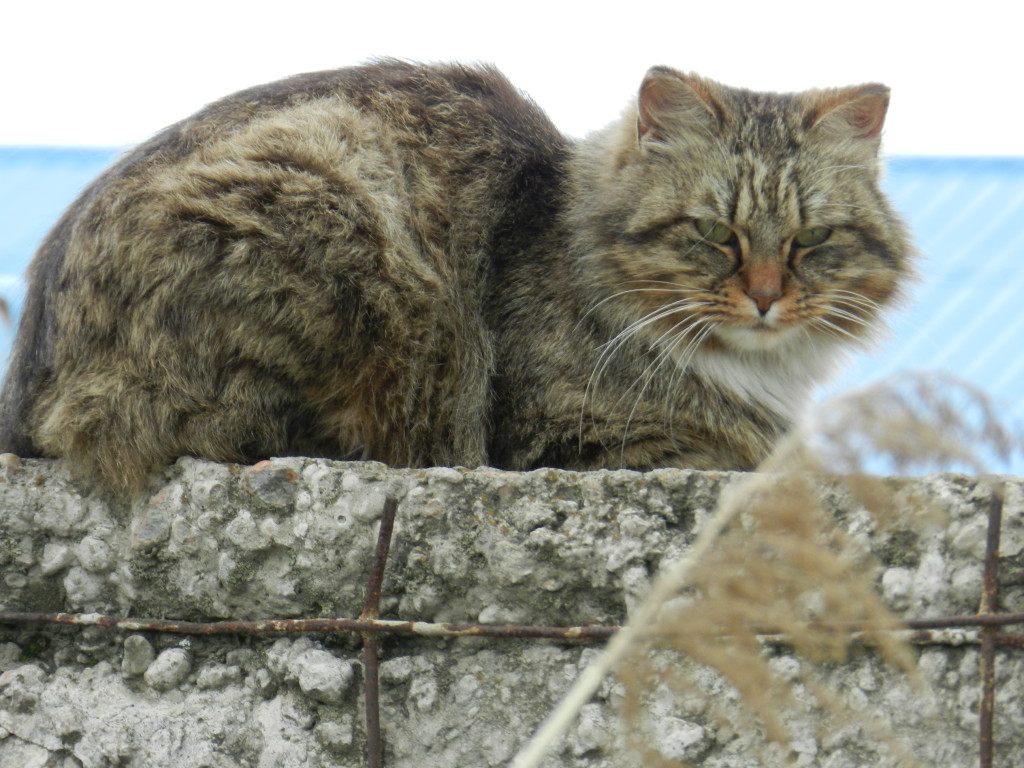 At 3:10 pm, Svetlana returned and the conga line now consisting of the guide van, the Roadster, the SUV, and the two Russian trucks headed to the loading dock: 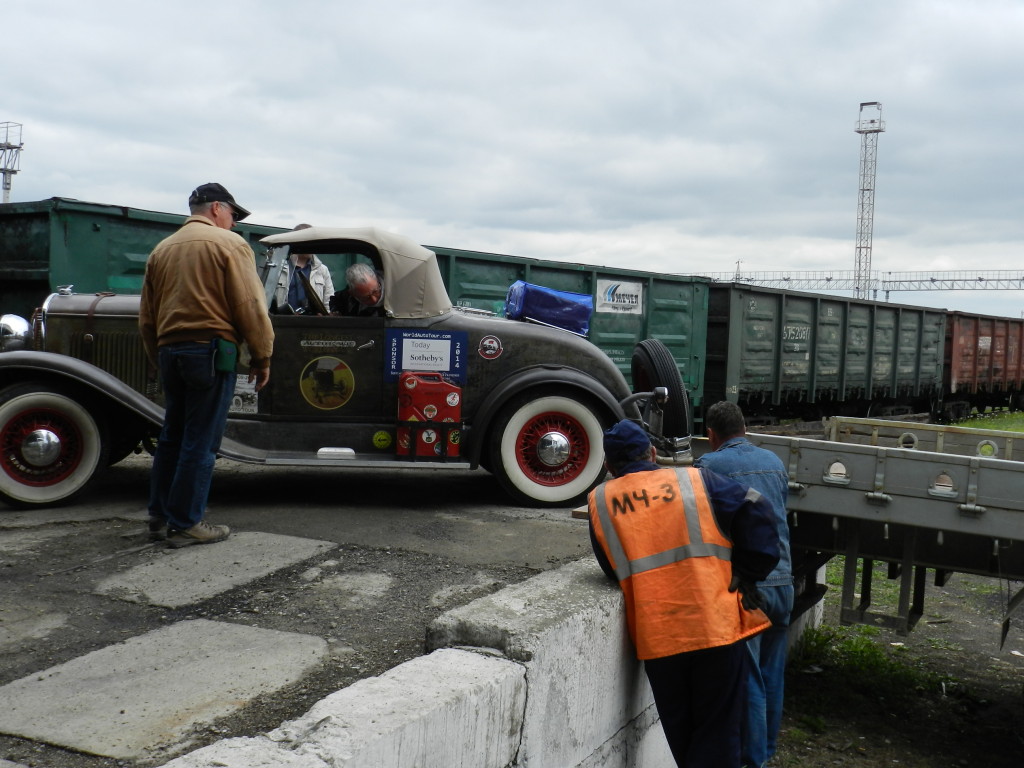 Loading the Roadster onto one truck (Eileen Bjorkman photo)

although we had a brief scare with some overflowing antifreeze from the Roadster, 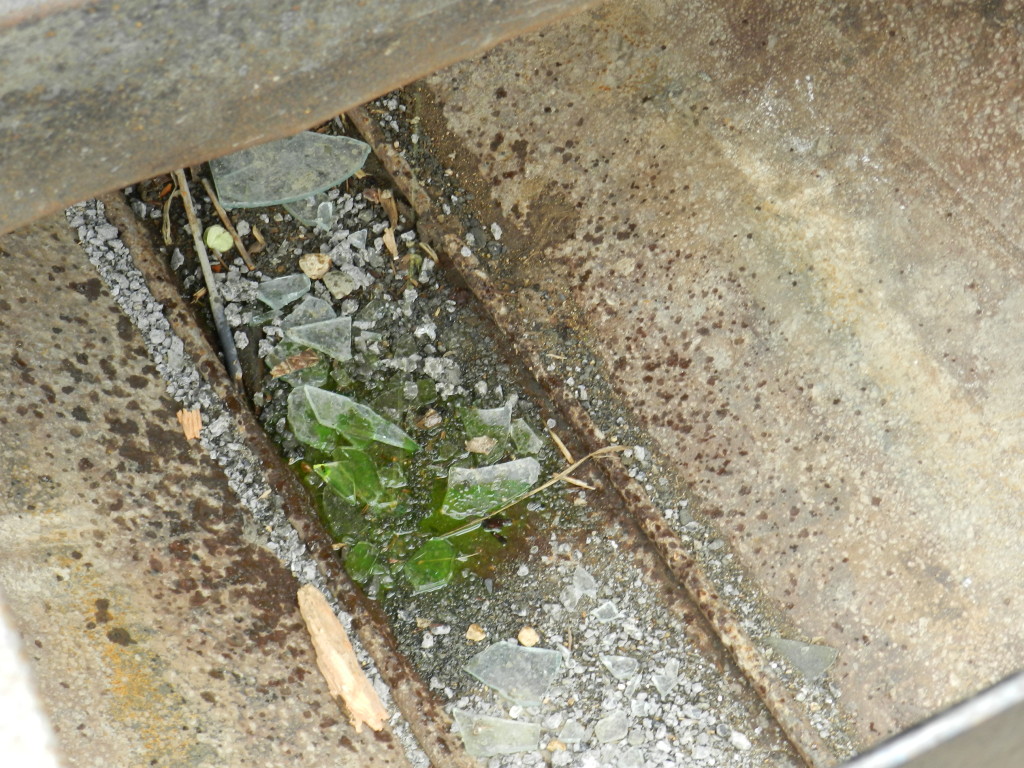 and by 4:00, the SUV was on the other truck, so Luke and I raced with Svetlana back to town to buy our bus tickets. 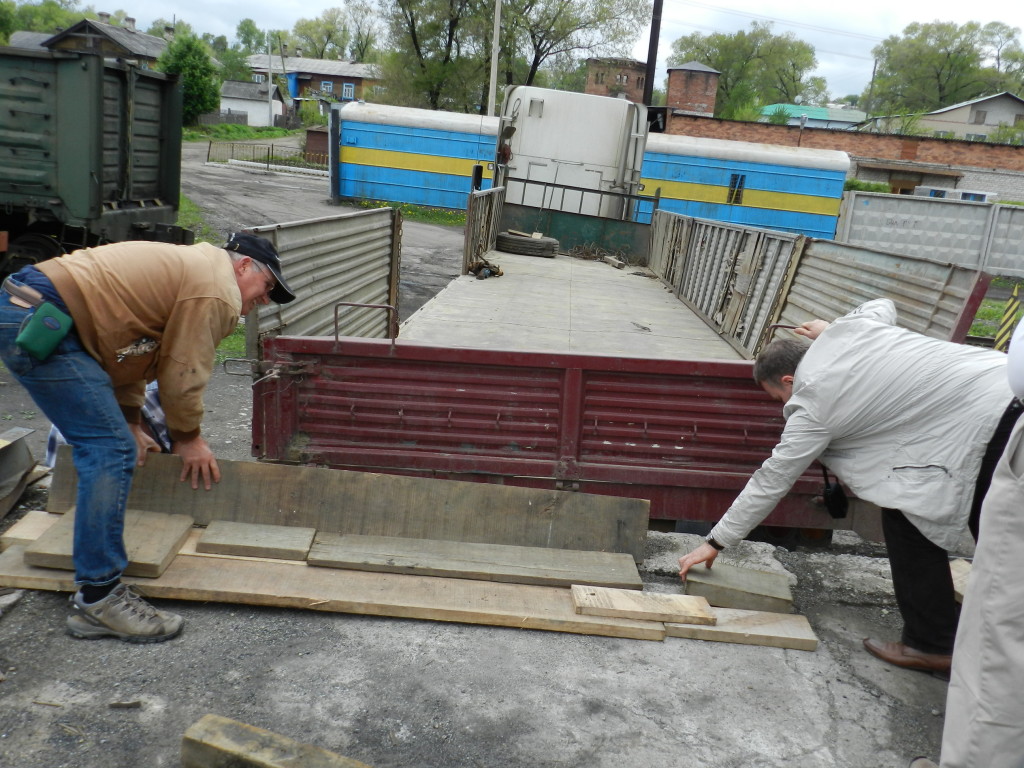 But not so fast … Svetlana took us to the border to get on the bus, and when we arrived, we saw that the trucks were nowhere near crossing yet.

Luke and I got some ice cream, and about 5:15, the trucks pulled across the first border barrier into the customs area. It looked like things were moving along, but then they pulled over to one side instead of continuing forward. Luke and I got on the bus at 5:20, where we sat for 45 minutes until the bus drove about 50 feet into the Russian immigration and customs area. After clearing immigration and customs, we reboarded the bus on the other side and about 6:30, we drove to Suifenhe, where we finally met our guide, Sim. 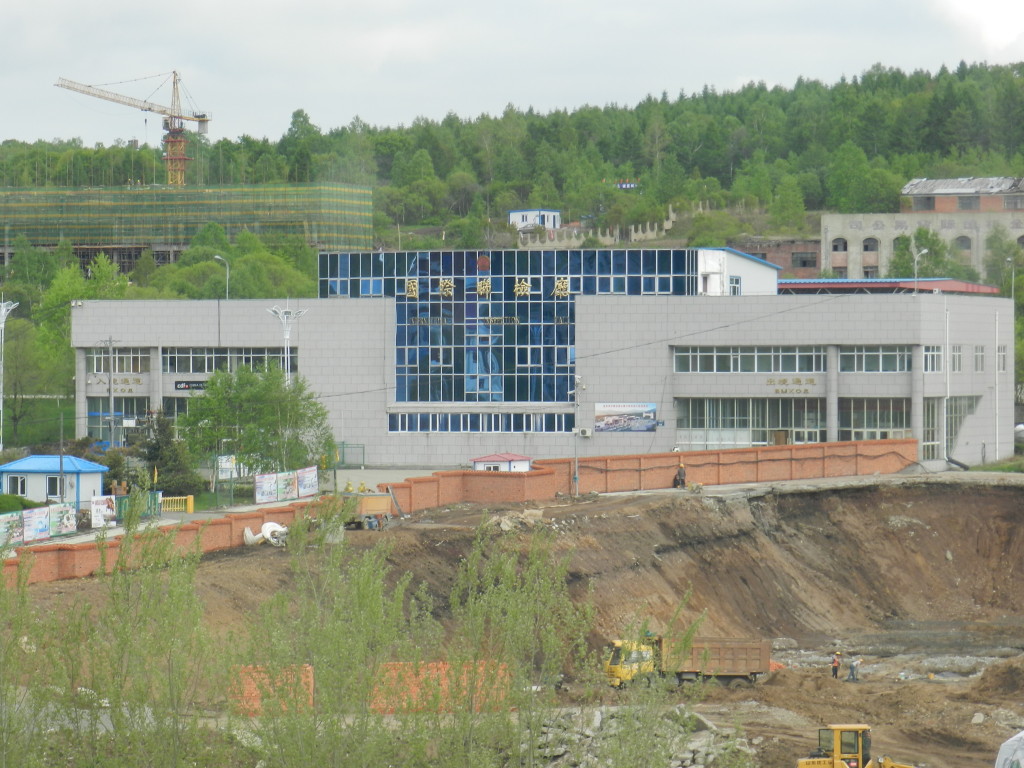 But John and Leo were still waiting, and waiting, and waiting some more. After a seemingly endless cycle of paperwork and passport inspections, Svetlana managed to get a temporary pass inside the border area and she somehow facilitated the release of the trucks into China. John and Leo arrived at Chinese customs about 9 pm as the customs officers were turning out the lights. But we all made it! Here’s our celebratory dinner in China at our hotel: 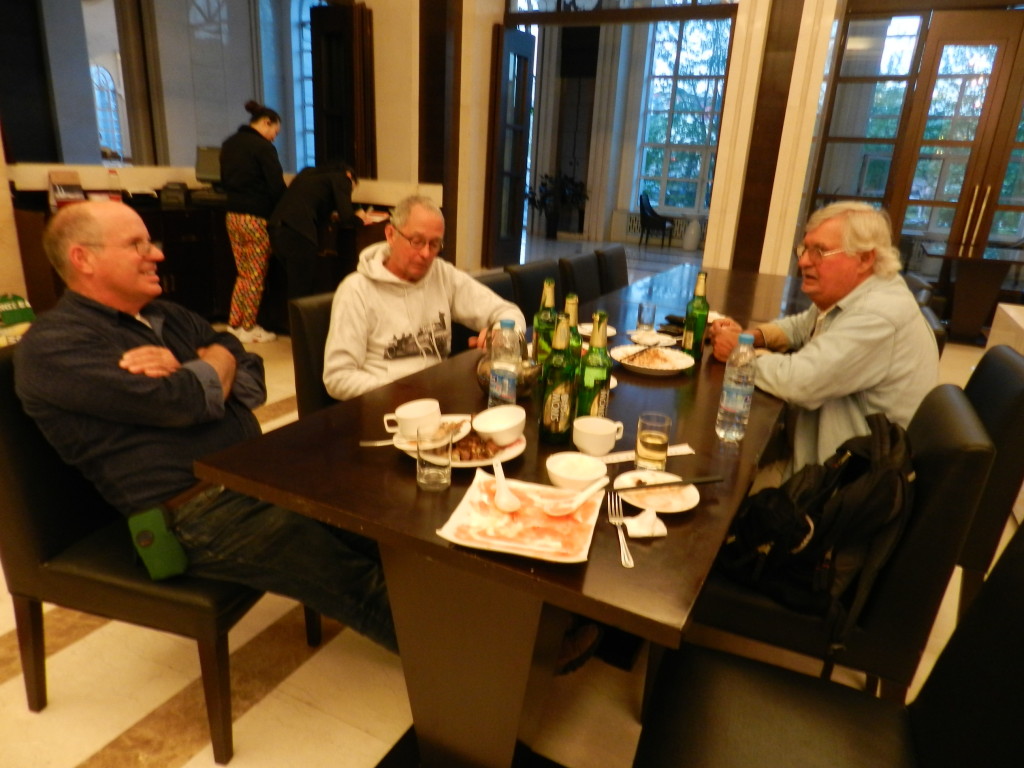 Tomorrow’s post: Getting the cars out of purgatory today.