This is John back on the blog after a few weeks off waiting for the Roadster to arrive in NYC, after shipping from Copenhagen, we are beginning Leg 3 – the final episode of our World Auto Tour adventure!!!

Luke and I flew into Newark, NJ last Thursday evening and picked up the Roadster Friday morning in a nearby shipping warehouse. The car looked great, with the exception of a broken wing on the radiator mascot, so it handled the 12 day container voyage without any serious problems. After completing the final paperwork, I went to start it….turned the ignition key and nothing; tried the headlights and no lights…I thought great, dead battery. Turns out that someone had disconnected the battery cable, so hooked that up and the old girl fired up after a little coaxing. As we were driving it out of the warehouse I smelled raw gas, so made a quick check and found a leak in the rubber gas line…solved that by cutting out a small section of the hose that was cracked and reattached….problem solved. It was then back on the road for a 4 hour drive north to Plymouth, MA….the beginning of the Yellowstone Trail.

Traffic wasn’t to bad until we hit the George Washington Bridge where everything became a slow crawl for the next hour before things cleared out.From there on it was relatively smooth sailing to Plymouth. That said, I can’t wait till we get on the back roads once again. Interstates are not my thing!! On Saturday, we got the oil changed on the Roadster by a local mobile mechanic and Luke installed the new load leveler shocks. I can’t believe after trying to get these shocks into Russia three different times with no success they are finally on the car. The result is a greatly improved ride so life is good – better late than never. 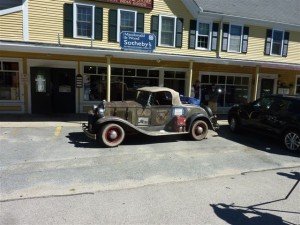 That night we met up with the San Francisco Sotheby’s group and friends for a great Leg 3 kickoff dinner. By the way, the fresh local lobster was great and the local Mayflower IPA micro brew was outstanding.

The official start was today and a great time, so I’ll post some pics tomorrow.