The Wi-Fi tonight is slow, so no pictures. We spent another eventful day at Customs, so there aren’t a lot of pictures anyway! And I’m very happy to have Wi-Fi, since we weren’t expecting any.

Two additional guides in a white Toyota Land Cruiser arrived at our hotel at 8:30 this morning to take us to the border. With Sim still in the Envoy with Leo and me, we followed the Toyota to the outskirts of town, where they signaled for a right turn. I slowed to follow him, and then I saw that he was turning onto the left side of a four-lane divided road.

“What’s he doing?” I asked, although I kept following him.

“We’re going to the cargo area,” said Sim, which I guess was supposed to clear things up for me.

The caravan continued on the wrong side of the road for another half-mile or so, when we came to a holding area filled with trucks heading to Russia and a building the size of a 7-11 off to the left. The guide vehicle parked at the building and we pulled up next to them in the Envoy and the Roadster. Sim went inside, and about 15 minutes later, he came back out and we left and drove about five minutes to another customs area, where we waited as both Russians and Chinese swarmed the Roadster for pictures.

At 9:30, we received our initial clearance into the holding area and we pulled up to the guard gate identified as “Immigration Inspection,” only to be turned away because the guards hadn’t received clearance from their supervisor. So it was back to the parking area, where we entertained more people who were crossing the border.

At 10:05, we were waved back to the guard gate, and at 10:15 we pulled past the guards after they gave each car a 3” by 4” scrap of paper marked with Chinese symbols and a circular red stamp, one of three stamps we needed to cross the border. We parked in front of the main customs building, which was the size and nearly the color of a Wal-Mart, but with better architecture, a lot more glass, and fewer goodies for purchase.

After about ten minutes of discussion between Sim and a customs officer, we entered the building and went up to a second floor office, where another officer looked at my passport and asked, “Four?”

“Passengers,” prompted Sim and I said, “Yes.” The officer smiled and sent us back downstairs, where we began a stamp scavenger hunt for the remaining two stamps for the border crossing. Sim led us out of the building and around to one side, where we entered a small office and a woman took the slips of paper and stamped them in less than a minute.

It was only 10:35 and we already had two of the three stamps. Maybe we really were going to get across the border by noon, as Sim had hoped.

We headed back upstairs to the customs office for the last stamp. About 10:45, an officer led us to a comfortable waiting room, labeled “Office for Prepared Service” in English, which held a flat-screen TV tuned to a playoff game between the San Antonio Spurs and the Oklahoma Thunder. The officer looked at our passports and when he saw where I was born, he smiled and said, “Texas!” and pointed at the TV. “Yes,” I said; I didn’t mention that I moved away from Texas when I was three years old.

After multiple trips in and out of the waiting area by three different customs officers, who looked at the scraps of paper, talked into their radios, and had more discussions with Sim, we learned that the customs director, who was the one to give us our last stamp, wouldn’t arrive until 2:30.

We trekked back downstairs to the main waiting area, and John and Luke went outside to guard the Roadster, which was attracting the usual amount of attention.

2:30 came and went, we still had no approval, and the customs director was now in a meeting. After a few more phone calls, an inspection of the cars, two trips back to the cargo area, and Sim pleading with the customs folks to get the director out of the meeting for a minute to get his signature, we finally had the last elusive stamp on the papers for both cars at 4:45. We went back up to Immigration, and then Leo and John drove the cars across the border while Luke and I walked to the other side with a customs officer escort. We met with the cars again about 5:30 and then crossed onto the Russian side.

Eight hours after arriving, we were half way there.

After going through a Russian checkpoint, getting in the wrong line, and then waiting for the usual photos now with the Russian customs officers, we were standing in line for Russian immigration and customs about 6:15. Luke and I made it across fairly quickly, but the cars were delayed another 1.5 hours for an inspection involving mirrors, dogs, flashlights and opening every door on both cars, including the engine compartments.

Reunited at 8 o’clock, which was really 10 p.m. given our most recent time change, we crossed the last checkpoint and met with our new Russian guide, Zhenya, who guided us to our hotel and a delicious welcome dinner, including a round of beer.

Many thanks to our Chinese guide, Sim, for his help in getting us out of China and to Zhenya for her patience as she waited all day for us to arrive!

Today we had a free day in Manzhouli to ensure our customs papework is all in order before we cross back into Russia tomorrow. So far, everything looks like it is going well, but we’ve learned not to make any assumptions, especially when dealing with customs in any country on Fridays!

We started this morning with a trip to the Zhalainuoer Museum, which opened in 2012 and depicts the natural and cultural history of the Zhalainuoer region, including a simulated mine. In addition to displays of mammoth skeletons, arrow heads, pots, and other cultural artifacts, the museum had many life-like dioramas such as the one below. 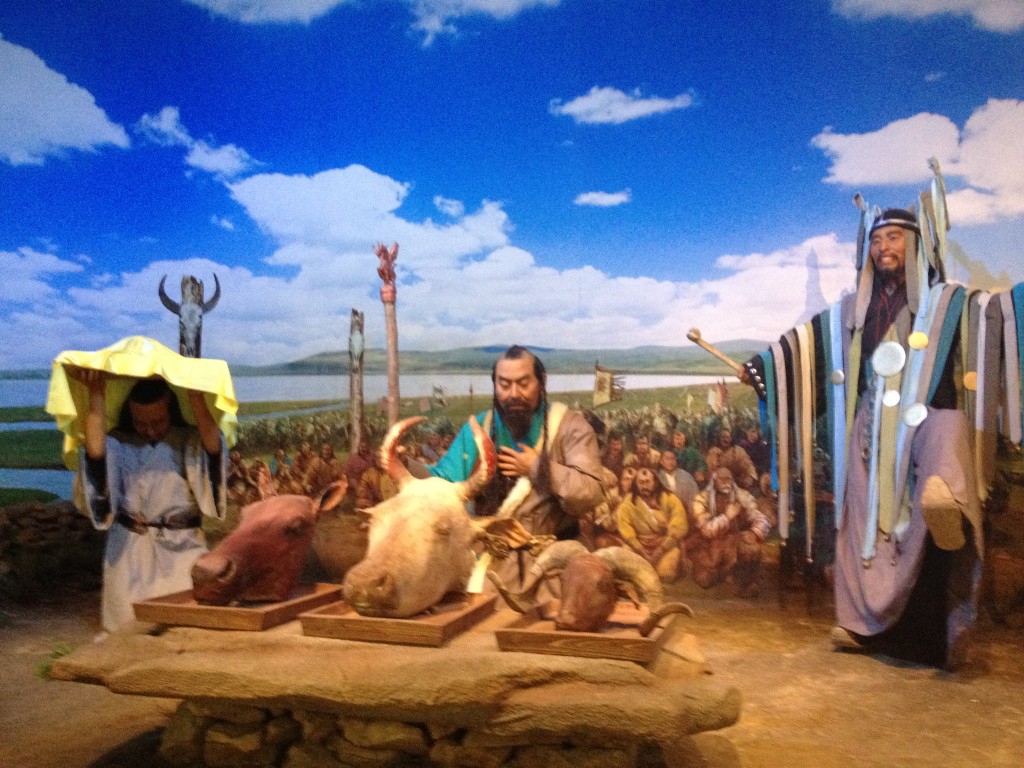 Here’s a picture of Sim explaining the display on the Trans-Siberian Railway that the original racers followed through Manzhouli. 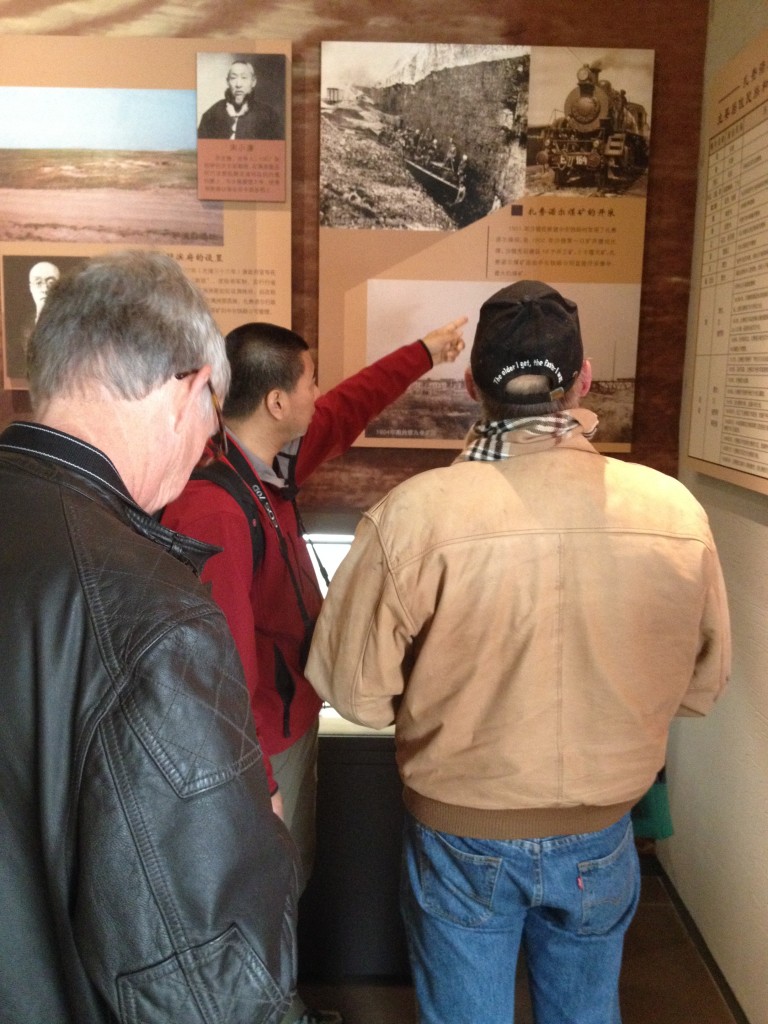 In the exhibit hall on coal mining, we found a gas can from the 1940s that looks a lot like the extra cans John carries on the 1928 Roadster: 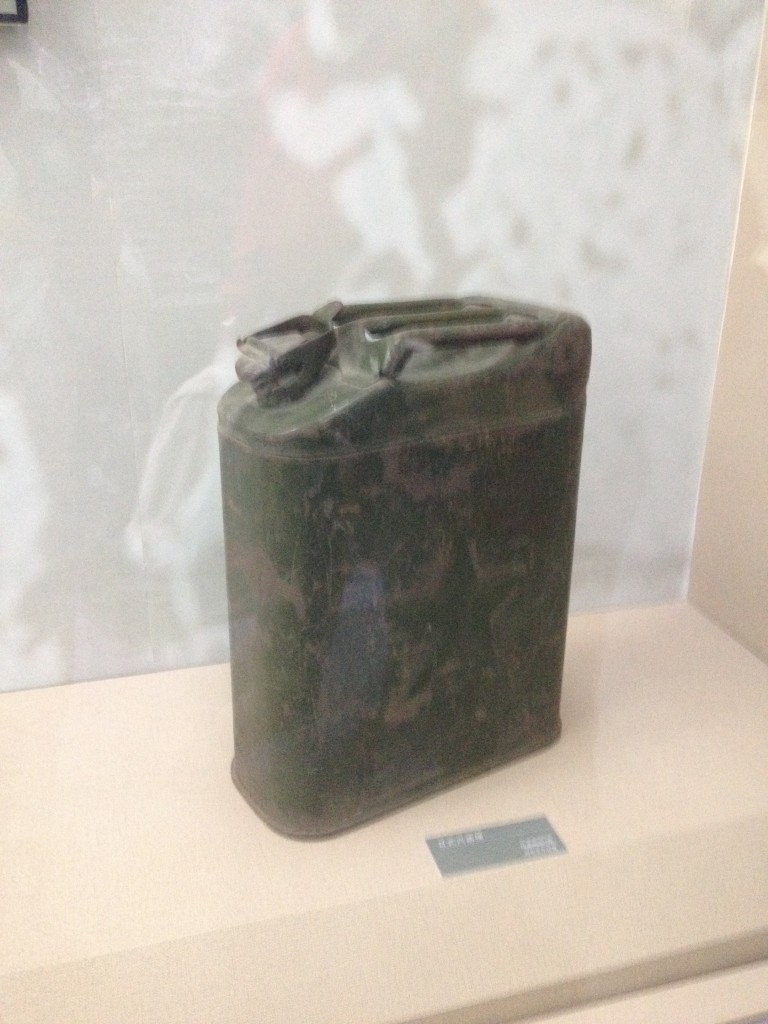 The simulated coal mine is huge — it took us about ten minutes to walk through the entire display. The realism extended to the darkness, so I didn’t get many good pictures, but here’s one of a conveyor belt: 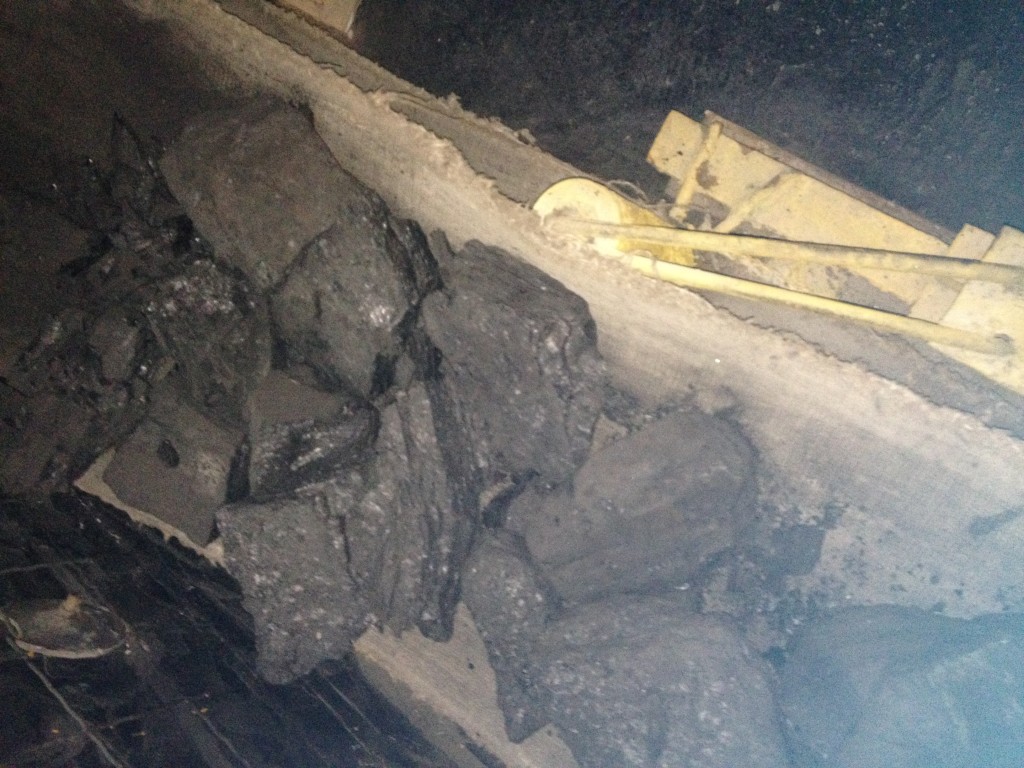 After the museum, we drove a short distance to a Mammoth Park. Even though it’s still under construction, they were letting people in, so we strolled among the dozens of life-like mammoth statues that gave us a feel for what a whole herd must have looked like on the steppe. I’m pretty sure the original 1908 racers didn’t see any of these! 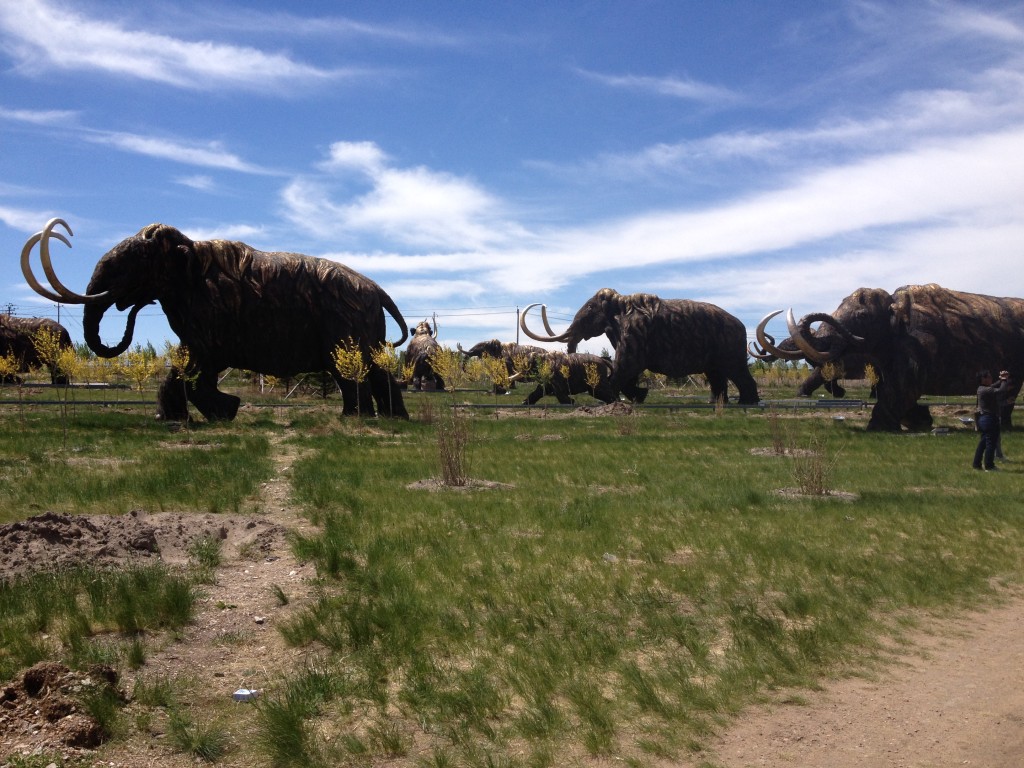 After we returned from our tour, Leo’s car got a bath at a local car wash, and then we all had noodle soup for lunch. 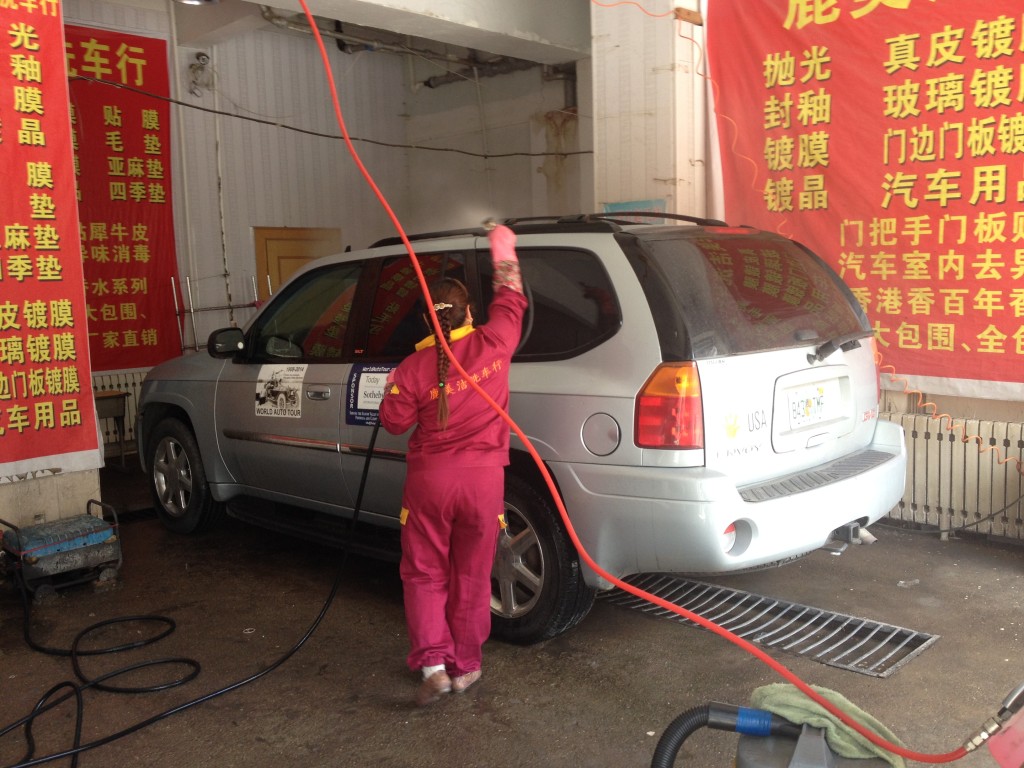 The Envoy gets a bath (Eileen Bjorkman photo)

During lunch, one of the restaurant owners where we dined was making Jhint, a kind of rice dumpling. The process involves a bamboo leaf, a special type of rice that has been soaking for a long time, and a date, as shown in the first photo below. The other photos show her filling a folded leaf with rice, which she then ties with a string from those draped over the chair in front of her. The result is shown in the last photo. The pouches are then steamed for several hours and cooled for a day before they are ready to eat. 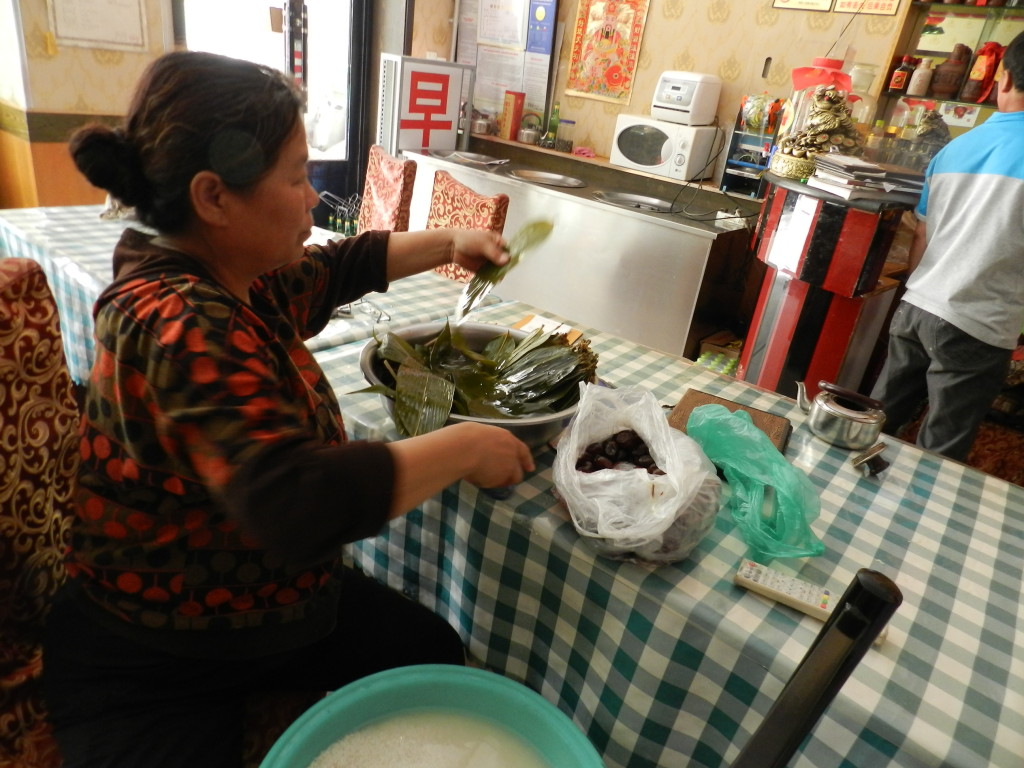 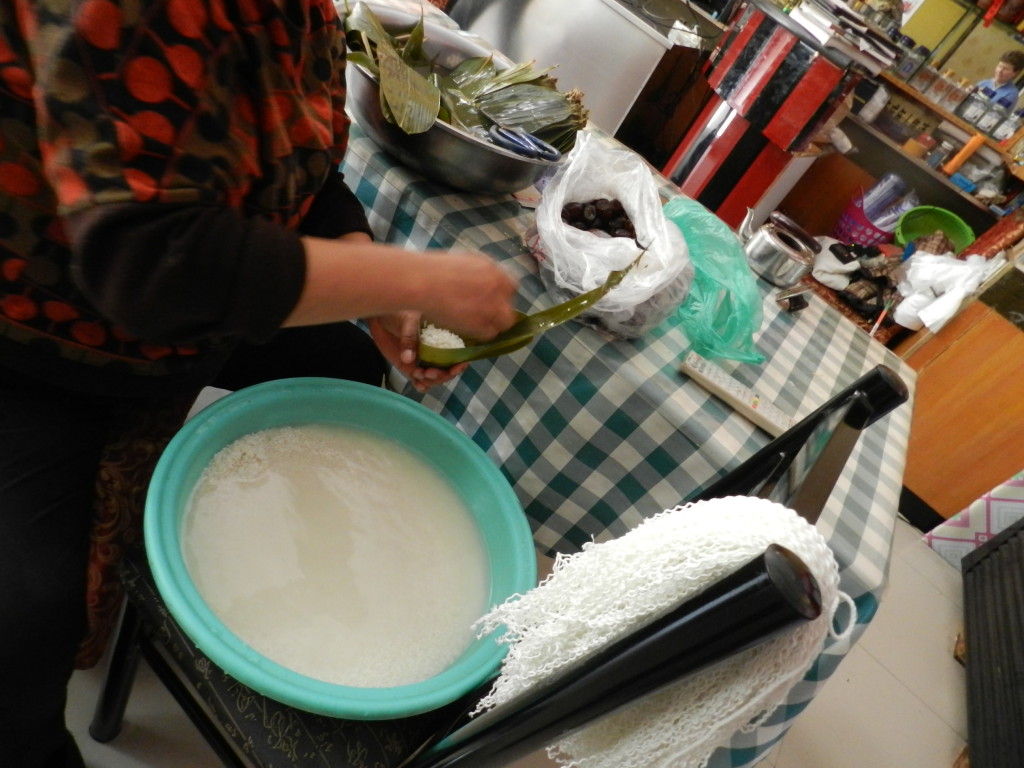 Filling the pouch with rice; notice the string draped on the chair (Eileen Bjorkman photo) 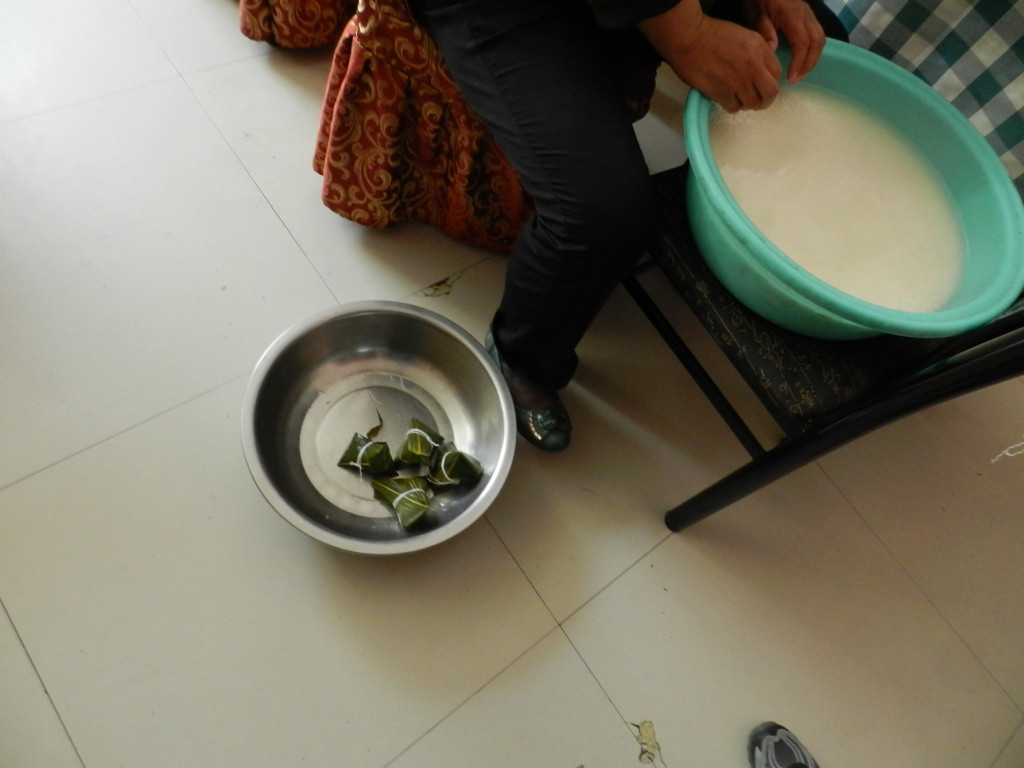 After lunch, we went in search of fresh fruit for Luke, 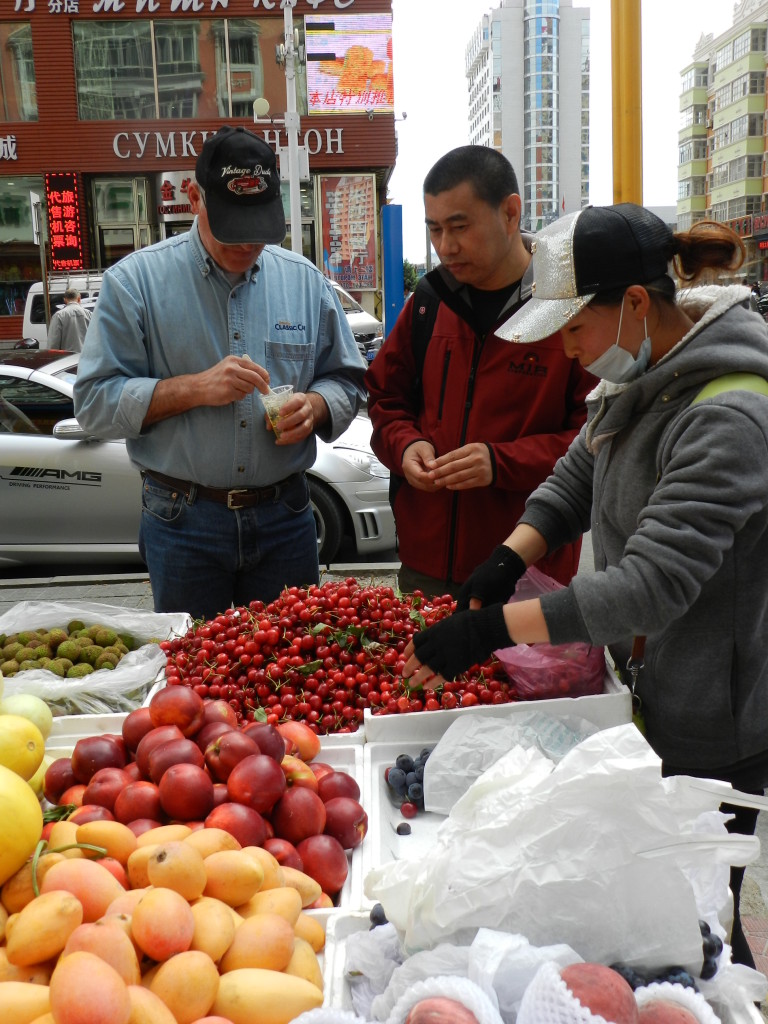 a bicycle pump for John so he could pump up the struts on the Roadster, 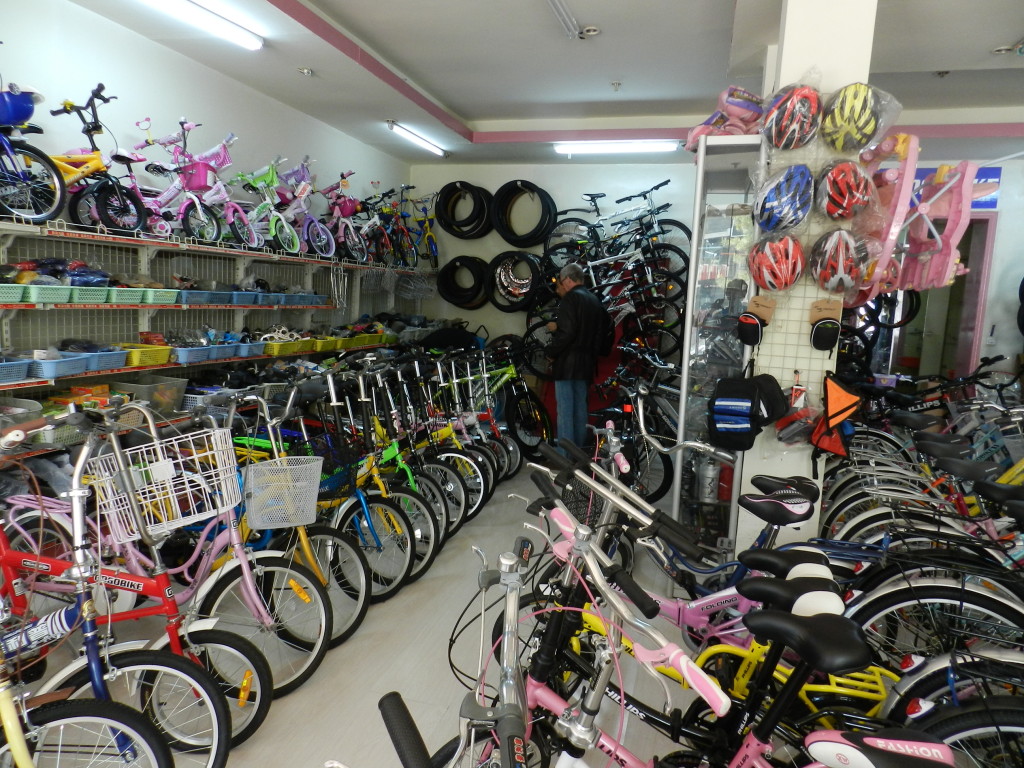 John in search of a bicycle pump (Eileen Bjorkman photo)

and fuses for the brake lights. We figure if we blow a fuse every ten days, the current cache should get us to Paris. If it doesn’t, we’re going to replace Luke as our mechanic — any volunteers? 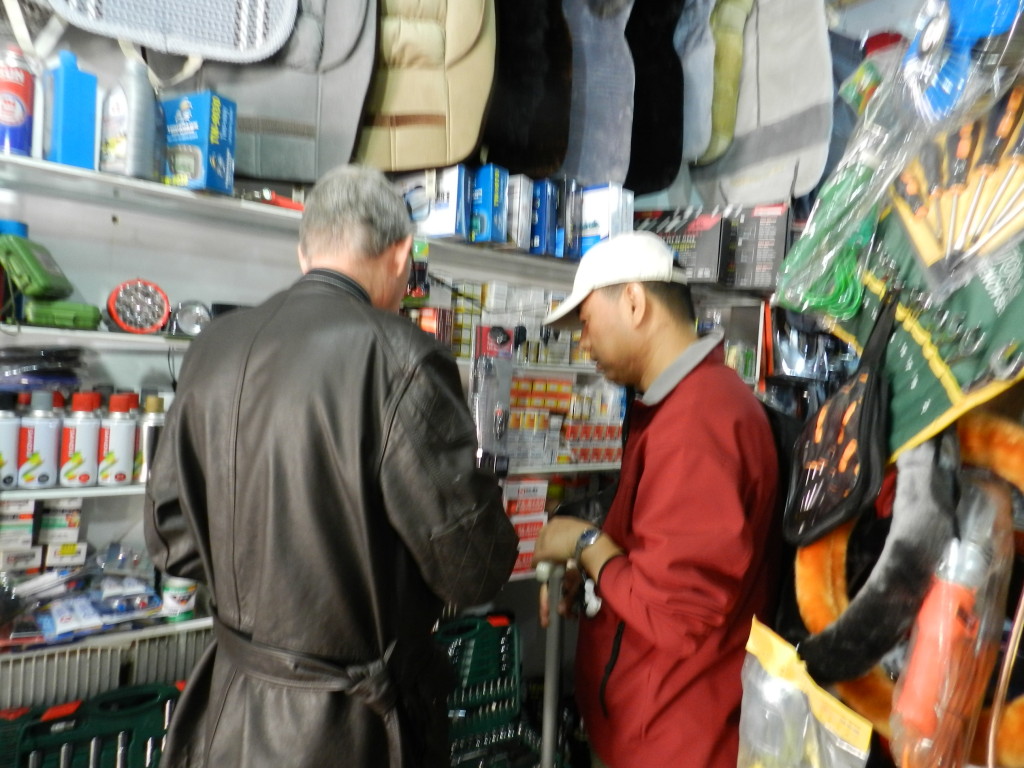 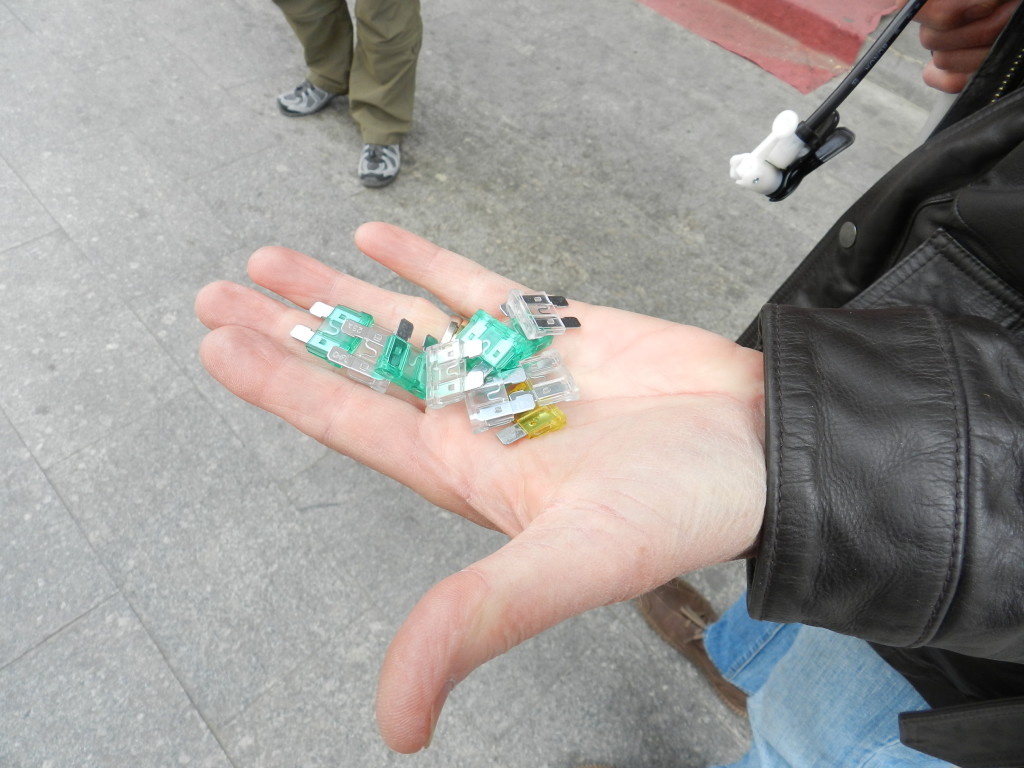 The precious fuses — this should get us to Paris! (Eileen Bjorkman photo)

After we returned to the hotel, Sim signed the Roadster, 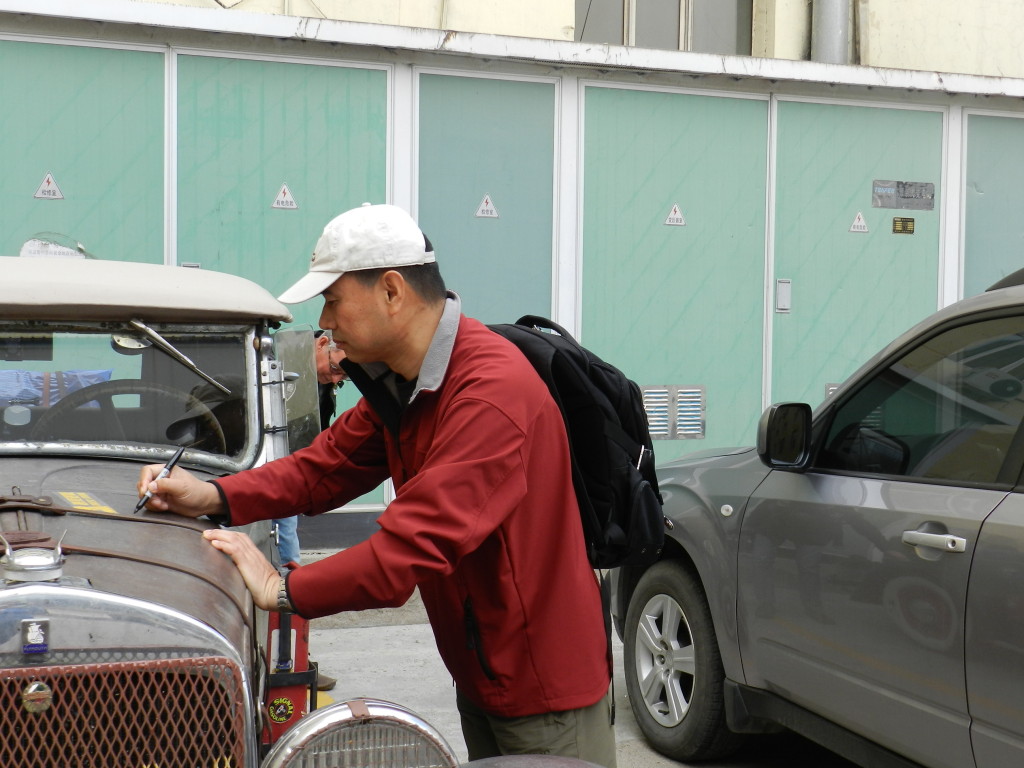 while Luke pumped up the struts. The bicycle pump worked great — the struts are now at 80 psi; I hope I don’t see the Roadster bouncing three feet in the air tomorrow as we head across the border! 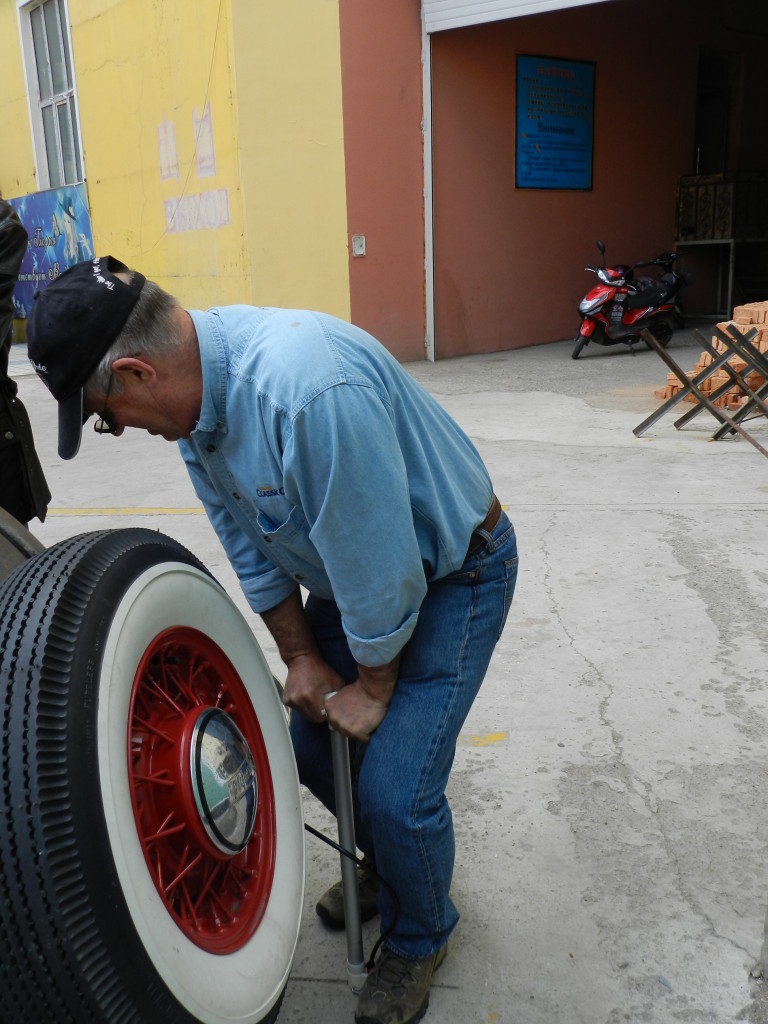 Luke pumping up the struts to 80 psi (Eileen Bjorkman photo)

Sim’s signature now joins the signatures of Hiro, our Japanese guide; Svetlana, our first Russian guide; and Igor, the Russian truck driver for the Roadster. Sim’s signature in the picture below says we started in Sifuenhe, came to Manzhouli, and are departing on May 30 (tomorrow). 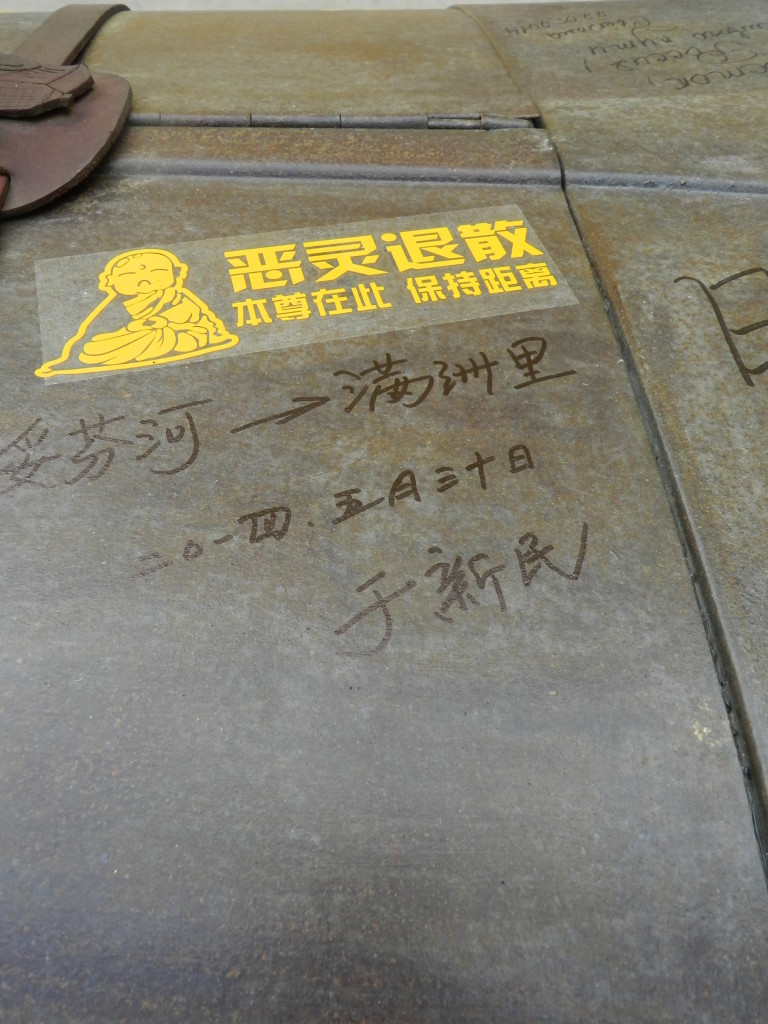 Tomorrow we cross the border into Russia and will be staying in Zabaikalsk tomorrow evening. I’m not sure of our connectivity for tomorrow; it may be Saturday evening in Chita before we have Wifi again. 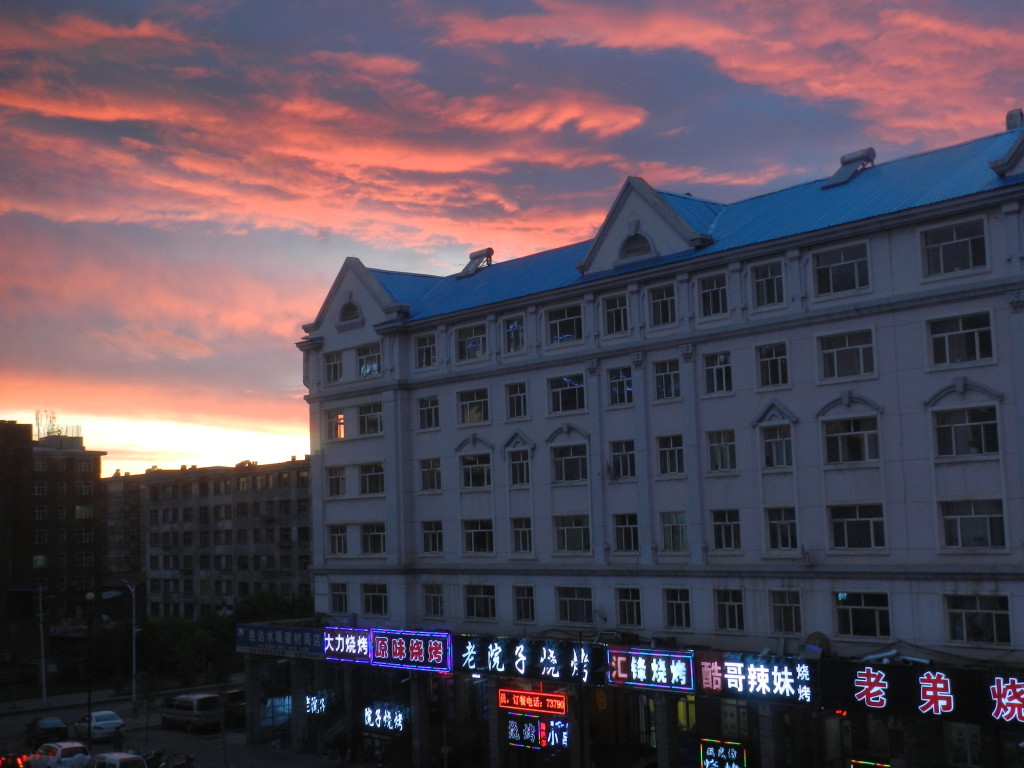 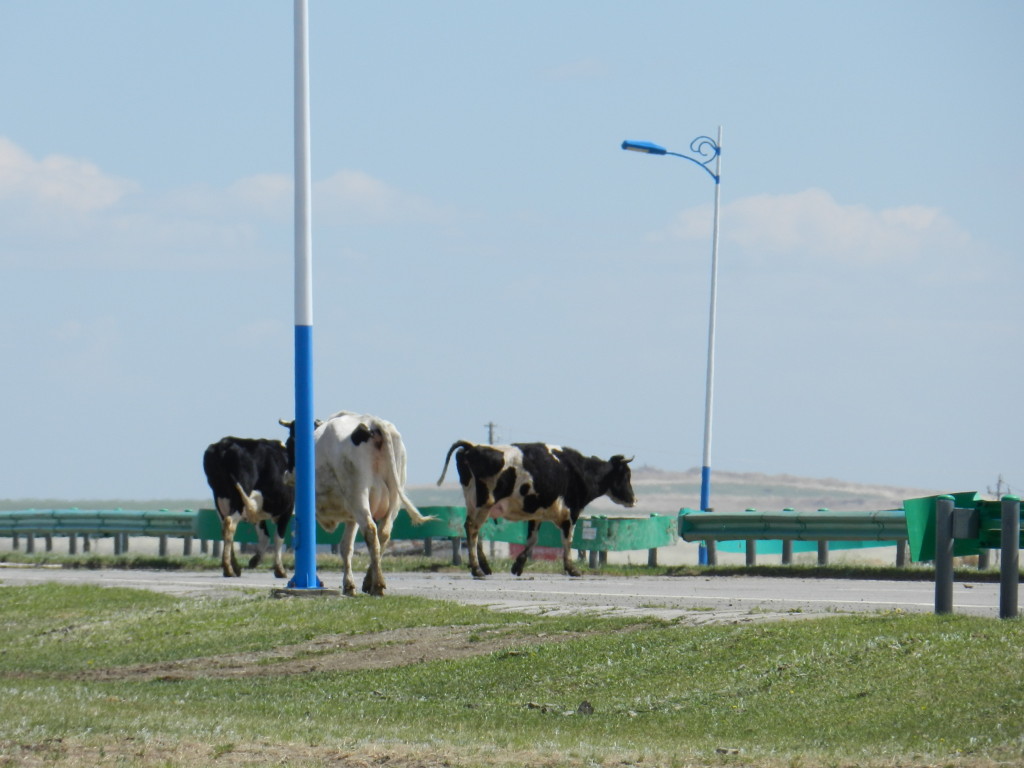 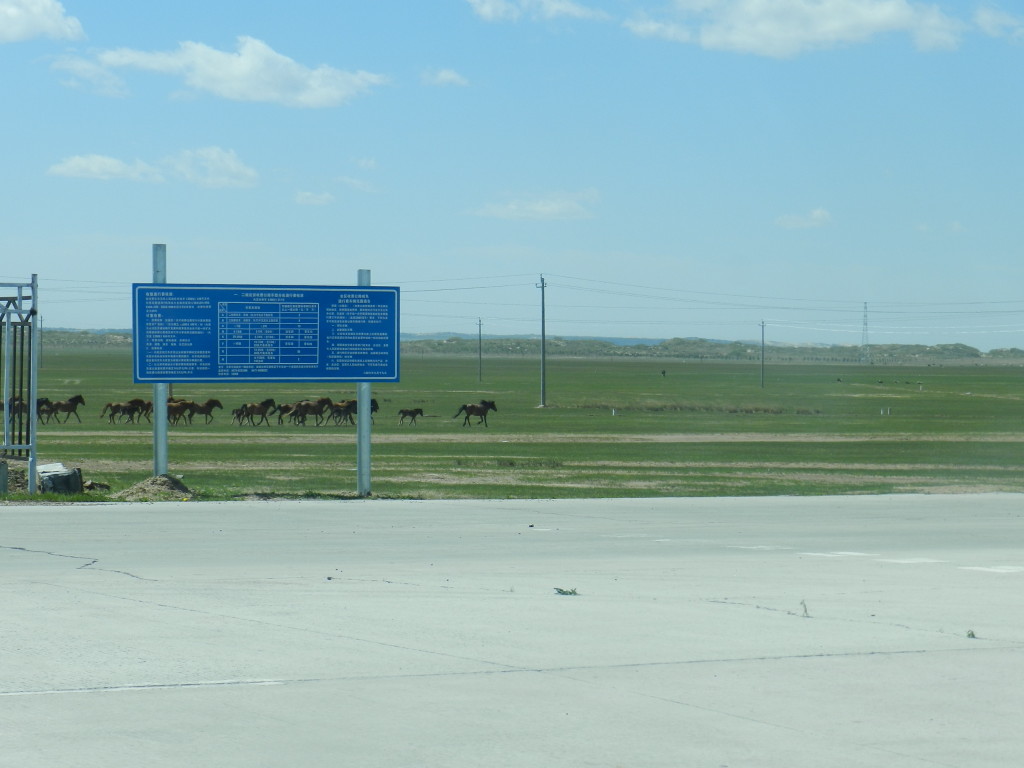 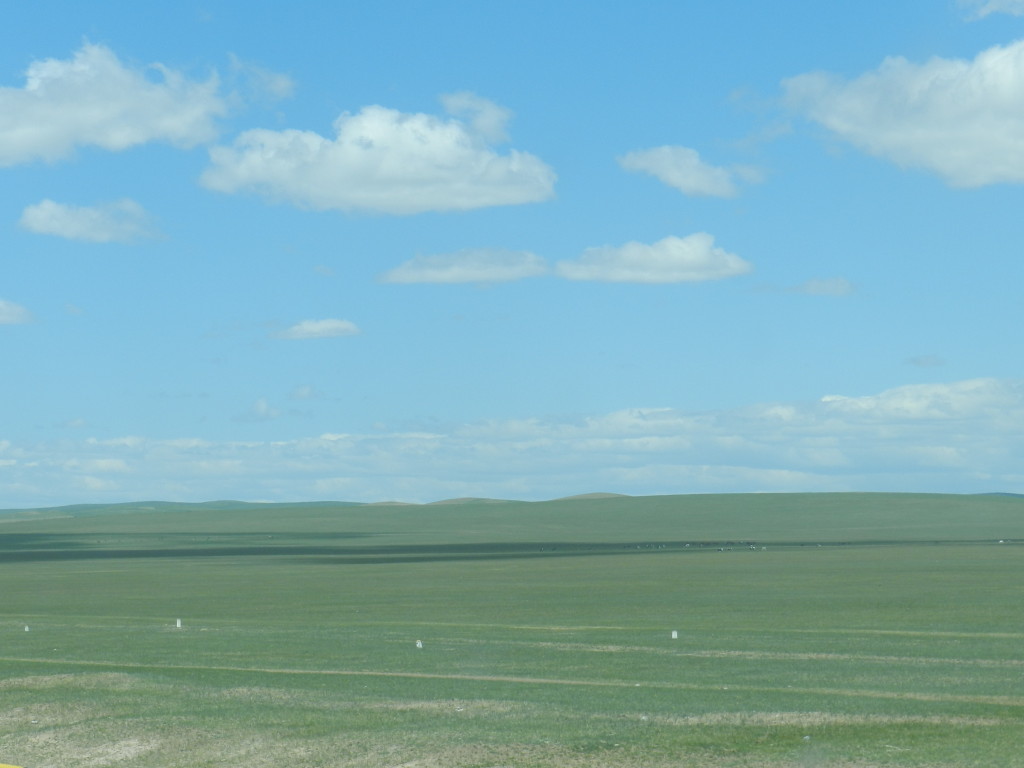 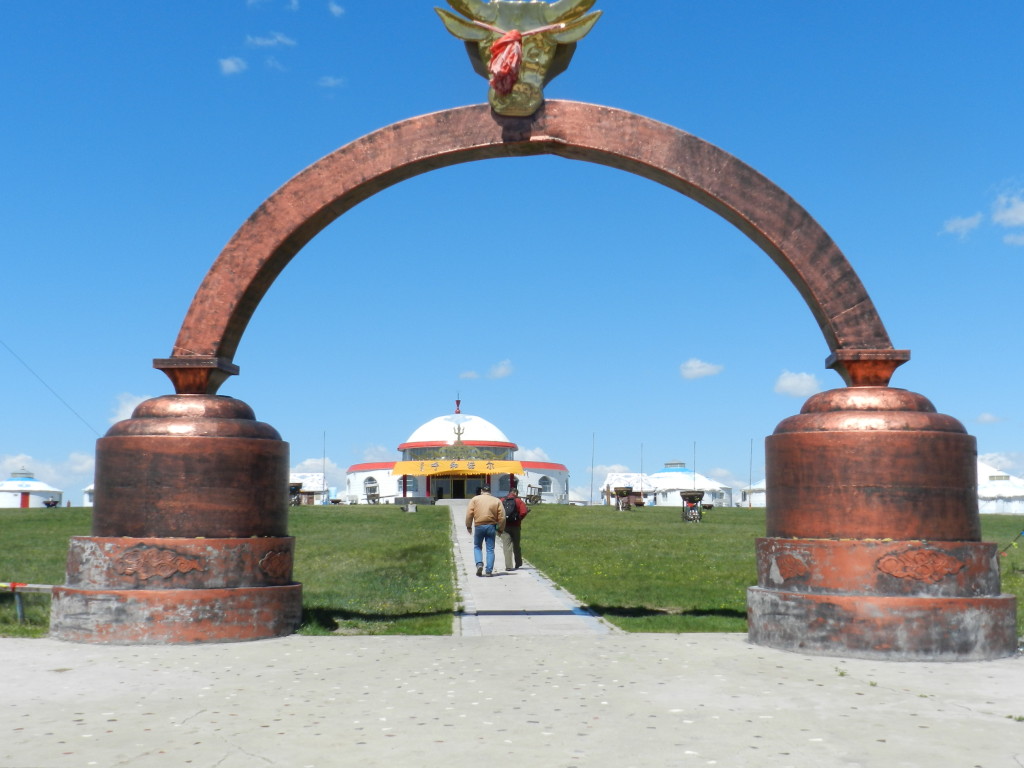 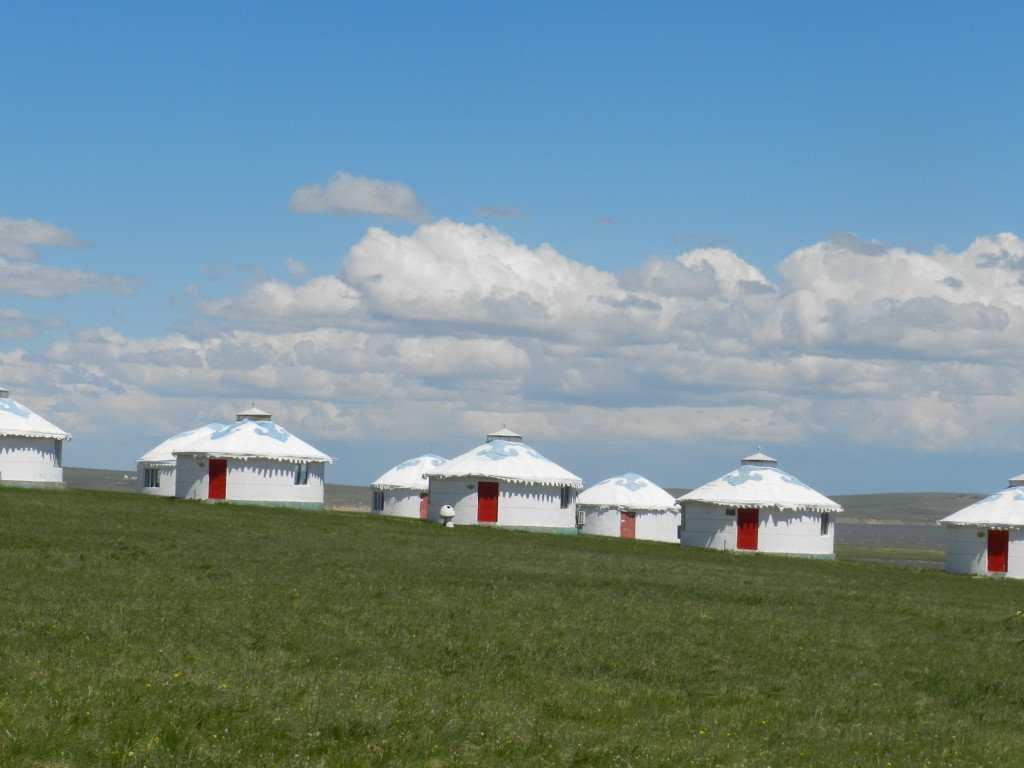 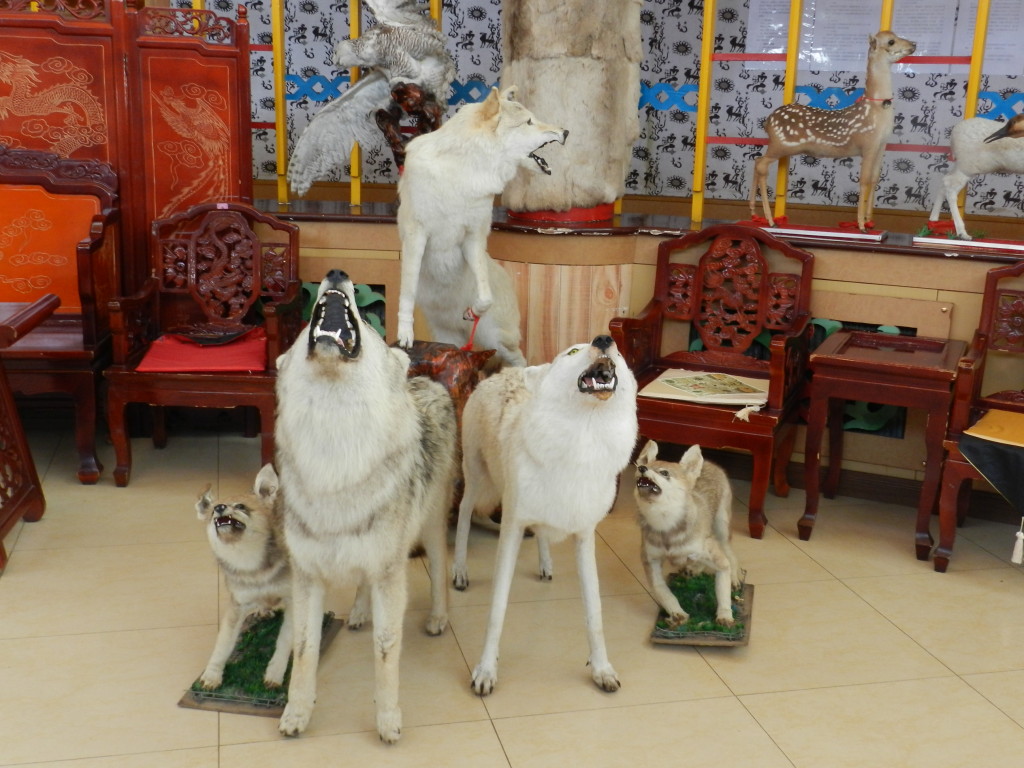