At this geographic point in the original race, it was already June 13, and the American team in the Thomas Flyer was past Harbin and gaining so quickly on the German Protos that the New York Times expected the Thomas to arrive first in Chita, Russia. Beginning in Harbin, Schuster and the Flyer abandoned the railroad tracks and took on a Manchurian guide to help them until they were past the Khingan mountain range. At the same time, the Italian Zust had just left Pogranichnyy. For the full New York Times article on this portion of the race, click NYT_19080614.

The racers encountered good roads west of Harbin and flat land that was almost a desert along “the route of Genghis Khan.” We encountered similar conditions in our drive to Qiqihar today, which turned out to be one of our more relaxing days — only about 180 miles. However, before we could get started, we had to get past the tangle of cars that littered the street where the Envoy was parked. The white one in the picture below blocked us from backing out: 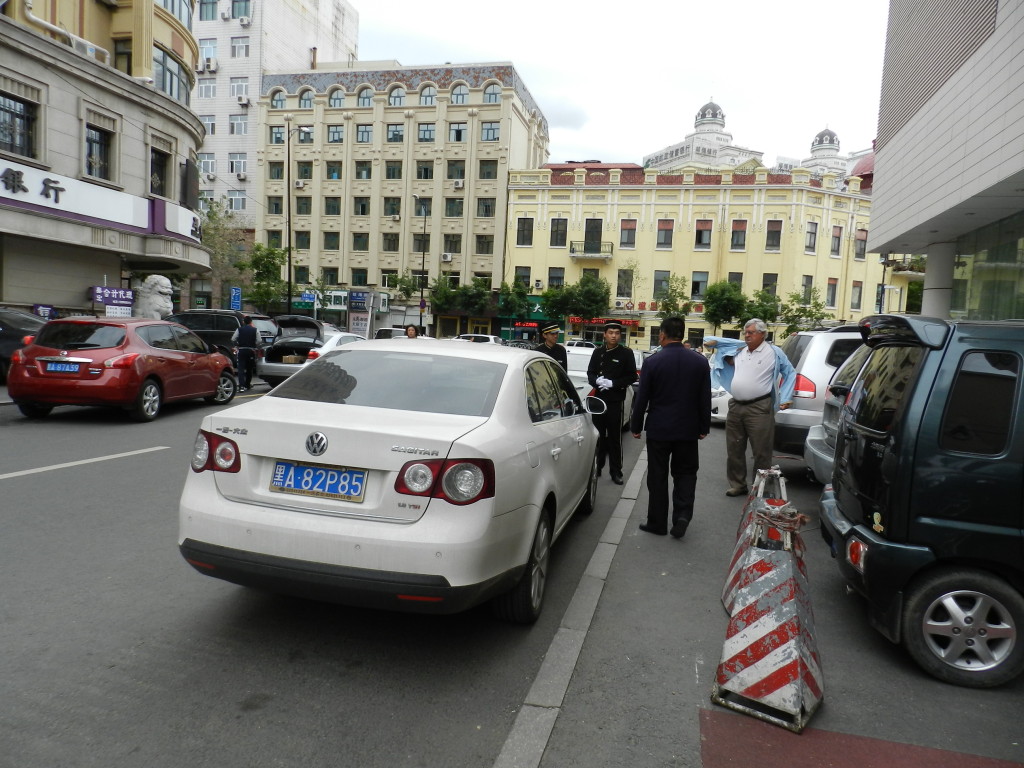 The parking attendants came to the rescue and we were soon on our way. Getting out of town was like driving a country road at midnight compared to our arrival on Saturday, and within about 20 minutes we were back on the G10 heading to Qiqihar. We stopped for gas after about an hour, and the Roadster was mobbed by the riders of three buses also stopped in the service area: 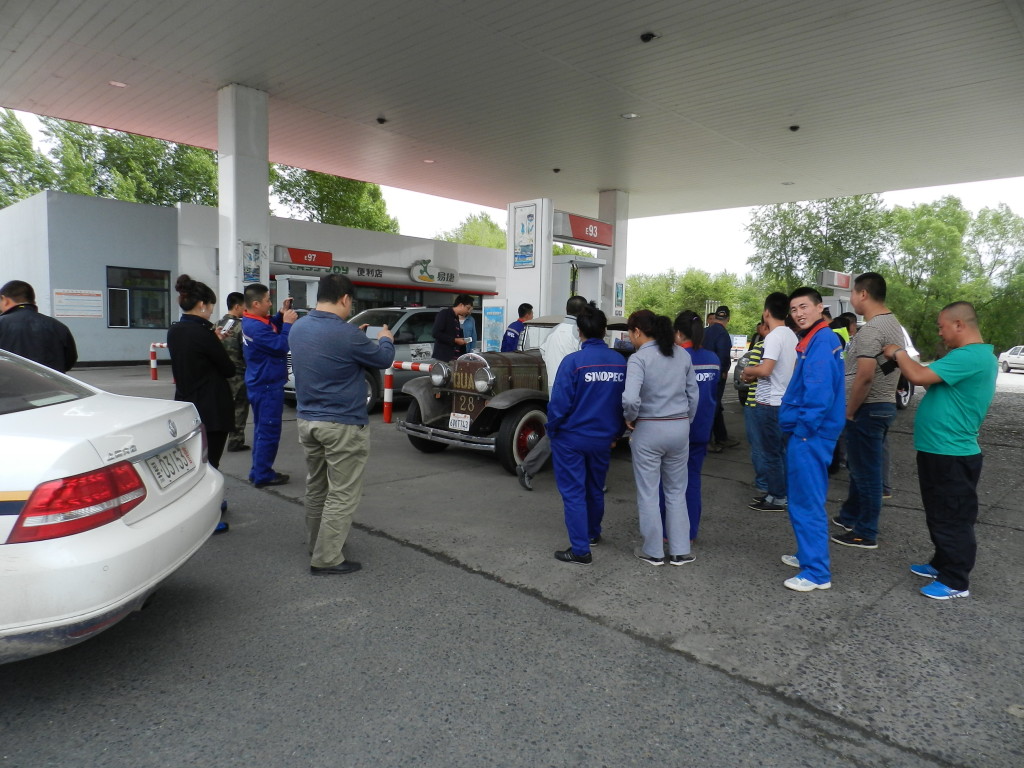 While John and Leo got gas, I checked out someone’s lunch, 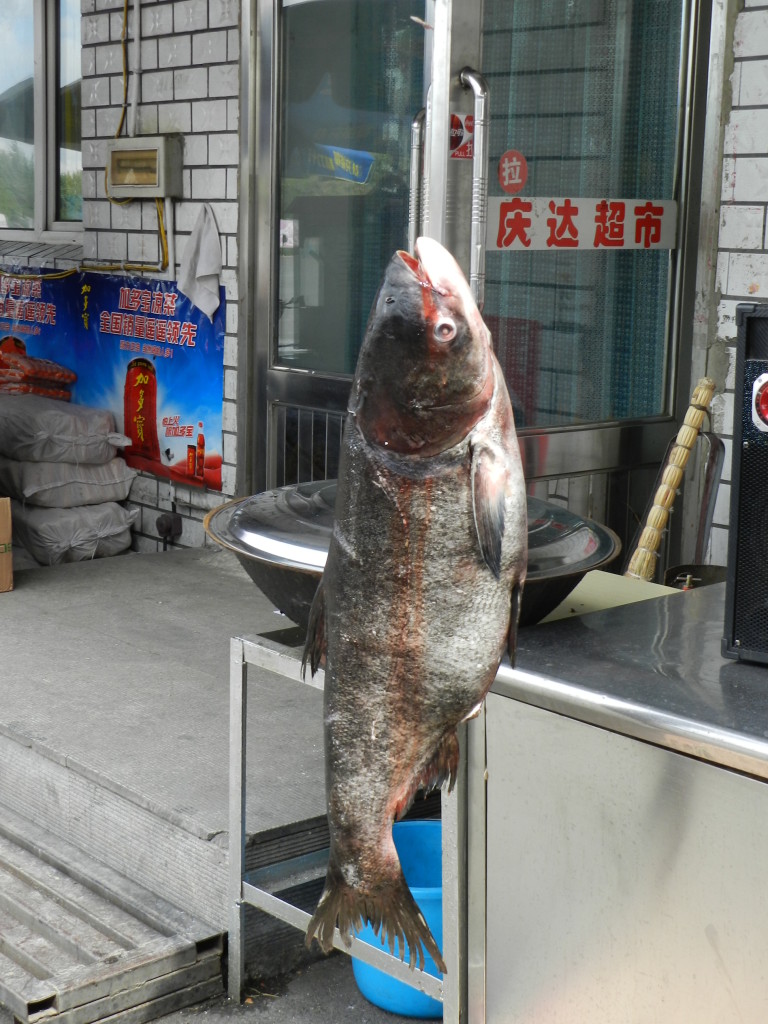 Fish hanging out at a gas station (Eileen Bjorkman photo)

and bought some popcorn. 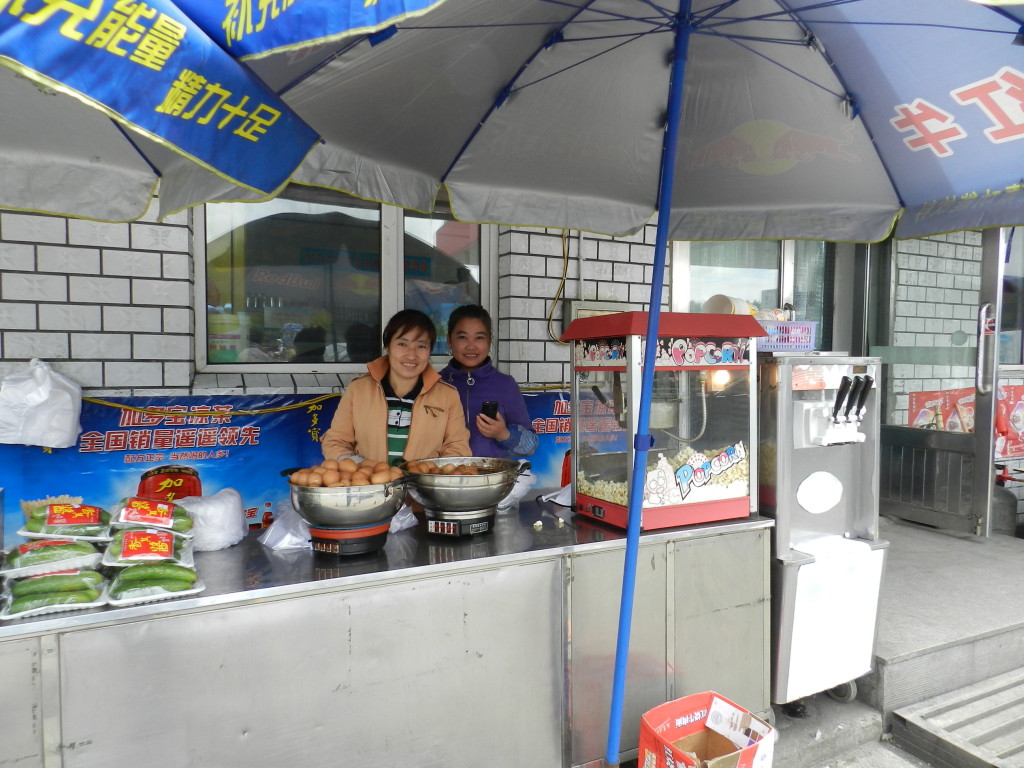 We took the Q10 exit towards Qiqihar at about 12:45, and immediately encountered a mini-flood that probably resulted from a water main break. John and I both managed to avoid the water, and then we turned left onto the road into Qiqihar, which turned out to be almost as bad as the dirt road we took on Saturday; the Qiqihar road was paved, but in such bad shape that I feared the Roadster might be swallowed up by a pothole. After about 20 minutes of jerking along, we came to a better road that led us straight to our hotel. However, we did have to pass through one more area of mud even on that road — there seems to have been an epidemic of water main breaks in Qiqihar today. The mud pit was so bad that a passing car sprayed mud inside the Roadster and onto John.

We arrived at our hotel, shown below, about 1 p.m., 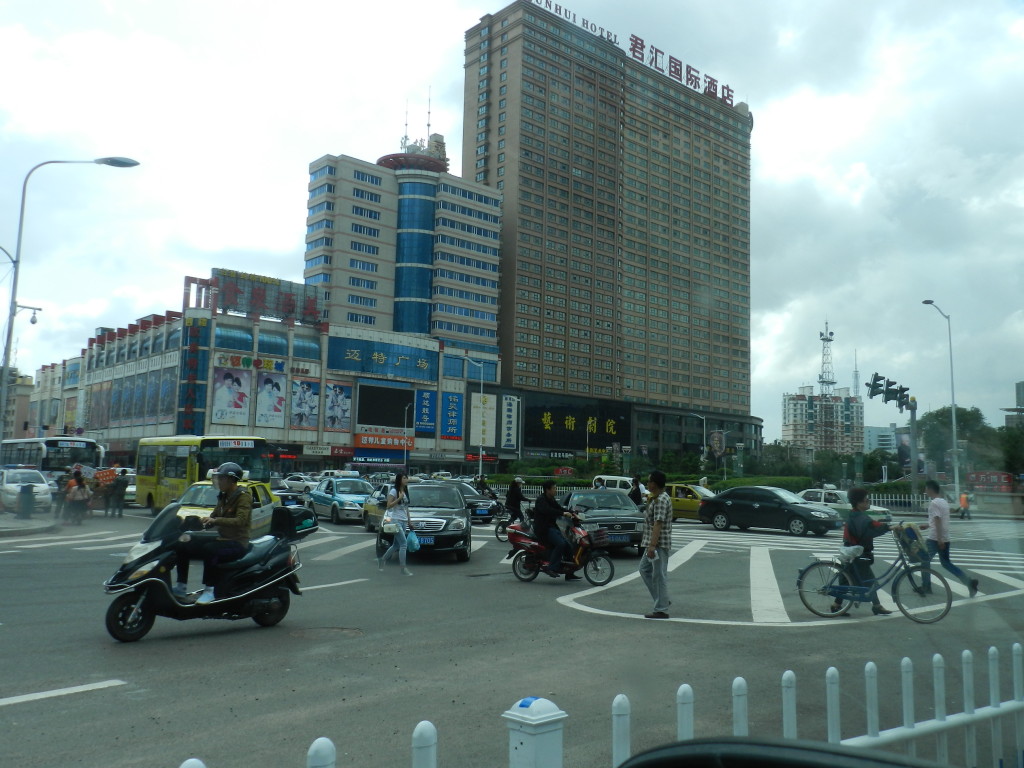 just in time to miss a downpour. 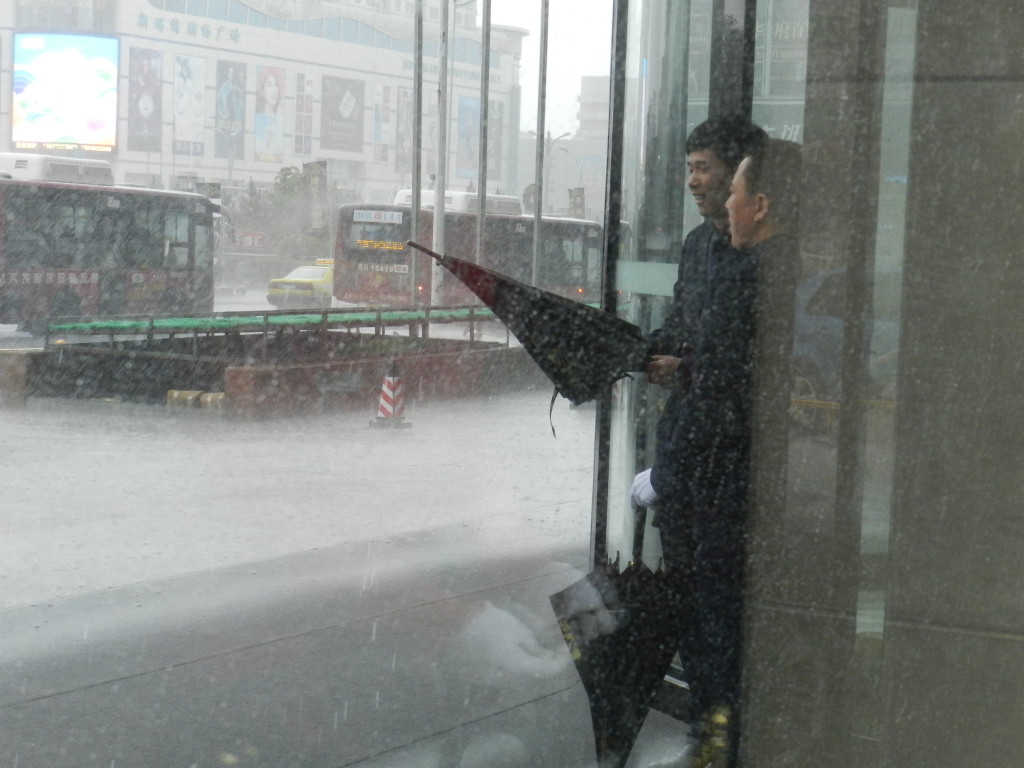 After a lunch of noodles and soup, John, Luke and I did some exploring around the hotel. We found an endless underground shopping area and a seven-level shopping mall: 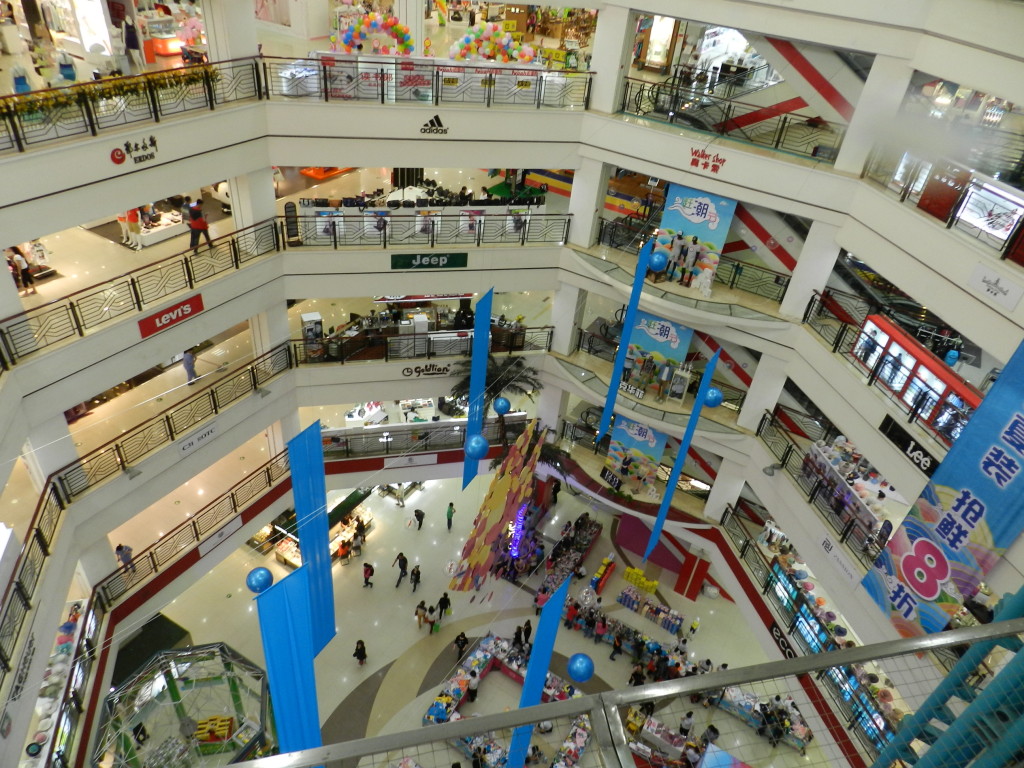 We did have one more casualty on this leg: John banged his left front hubcap on something while maneuvering around some cones at a tollbooth. Ow! 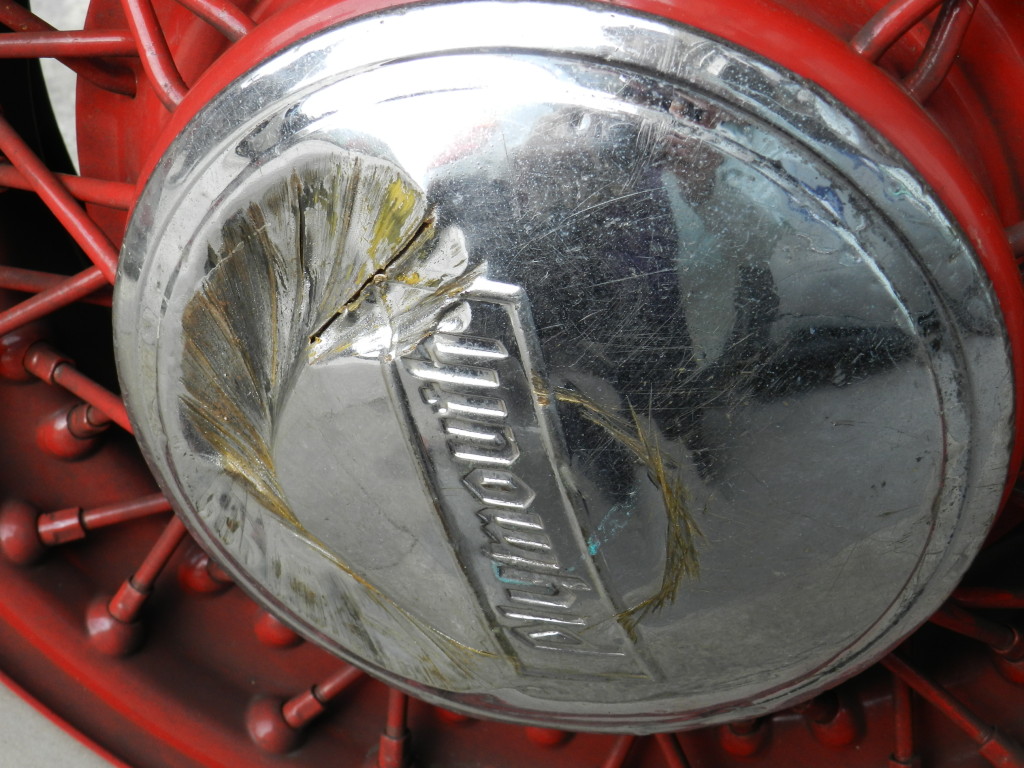 Up tomorrow: Qiqihar to Yakeshi, 420 km.