Number of tie wraps: 50 (one added since last post)

Sorry to miss the post last night – I didn’t have an Internet connection and the World Cup took precedence anyway! Before I forget, I wanted to post a picture I missed from the other day that shows Leo with his friends Siegfried and Inge Niedek. Siegfried and Inge were the ones who alerted us to Heidi Hetzer’s circumnavigation of the globe, which I blogged about two days ago. 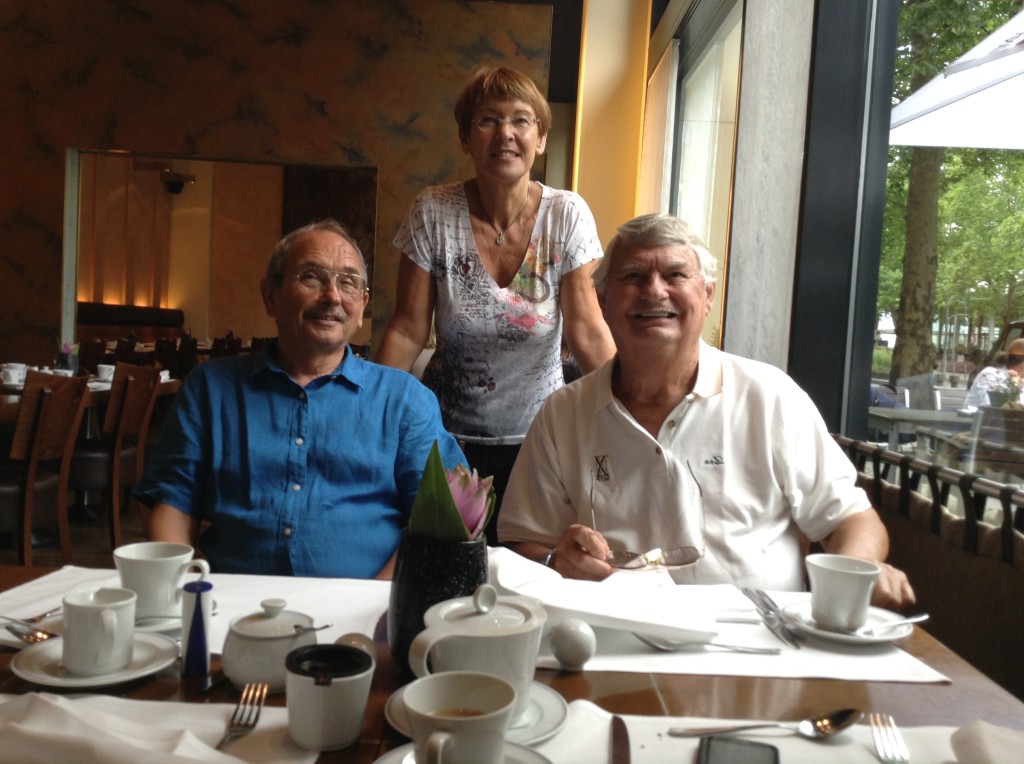 Today we had two bright spots in our rainy drive to Cologne — an auto museum and a castle. The Automobil-Museum is near the city of Dormund, and it displays a rotating set of cars from a collection owned by the von Graeve family, along with automobile-related items, such as those shown in the picture below. The sign for Veedol oil reminded me of the “Miss Veedol,” the first airplane to fly non-stop across the Pacific Ocean, a feat accomplished by Clyde Pangborn and Hugh Herndon in 1931. 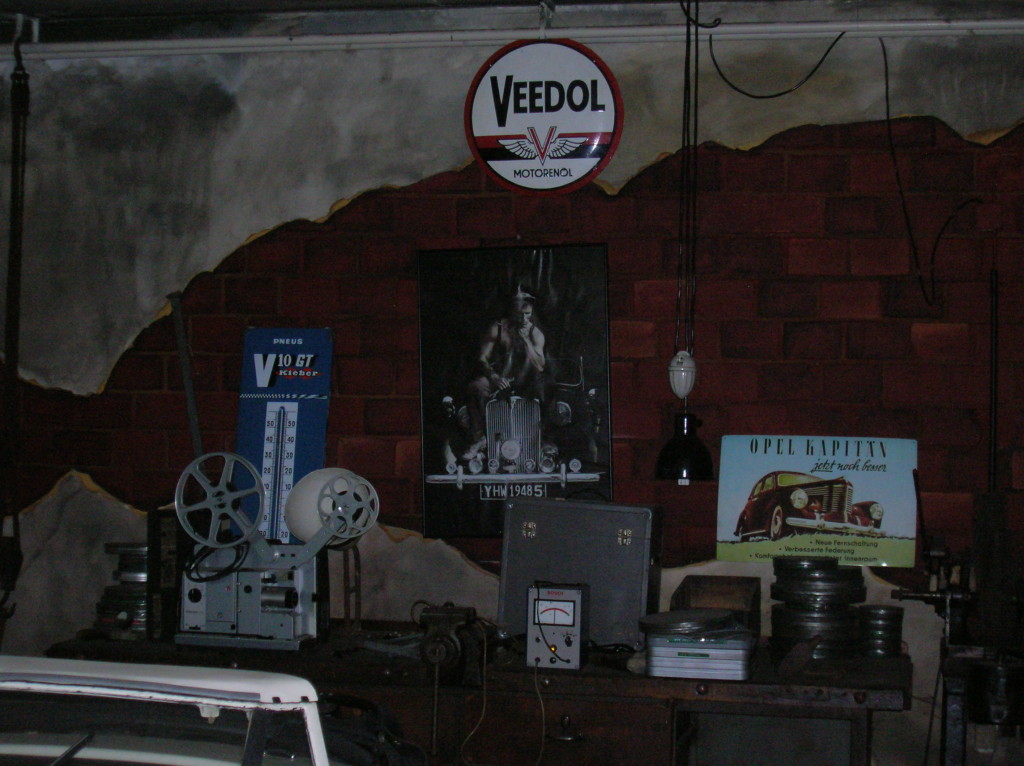 Display at the auto museum in Dortmund (Eileen Bjorkman photo)

The museum also has a bar with an interesting beer tap made from an old Jaguar engine. 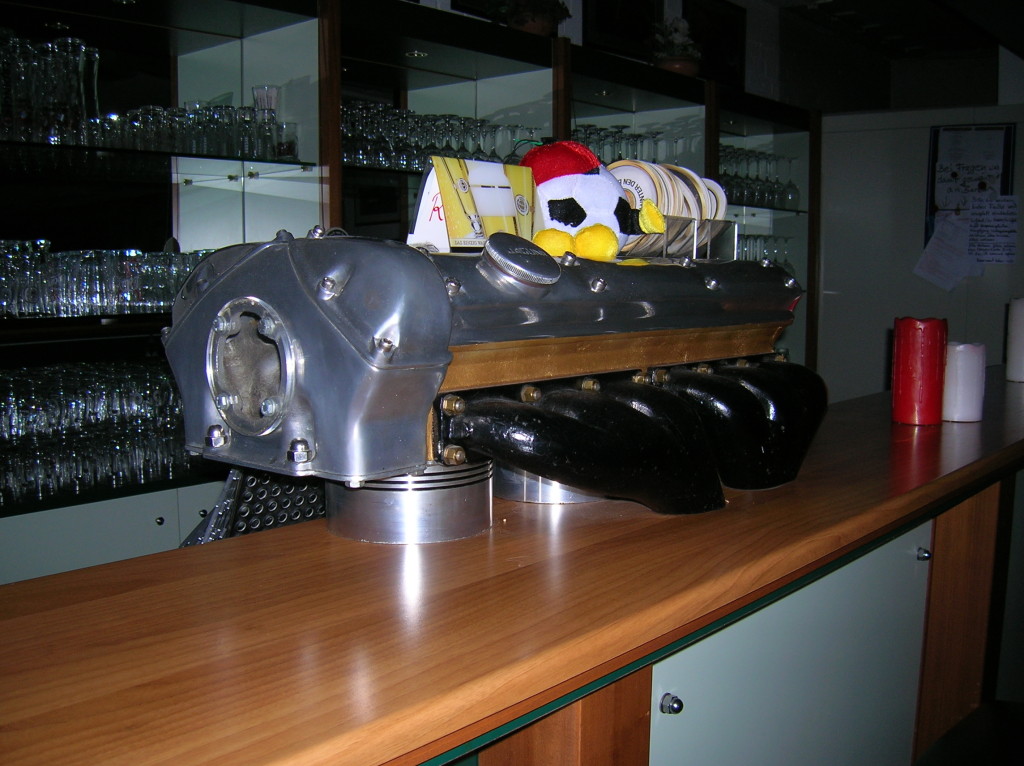 While we were having pizzas for lunch at the Pizzaria in the museum, Barbara van Graeve stopped by to say hello and to tell us about the Mille Miglia, an annual 1000-mile car rally that takes place in Italy. There is a restaurant at the museum named after the rally, and the restaurant interior is a replica of the square in the town of Brescia where the race begins. 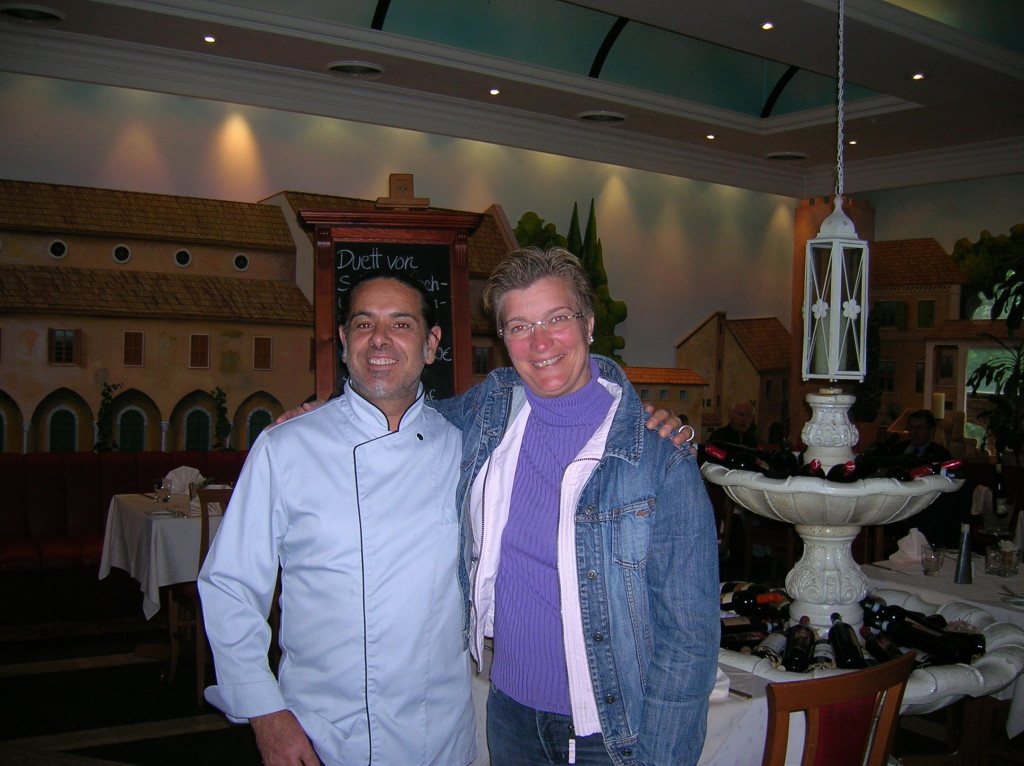 Luke had never seen a castle before, so after leaving the auto museum, we drove to the Schloss Burg for a quick tour and pictures from the top of the tower. 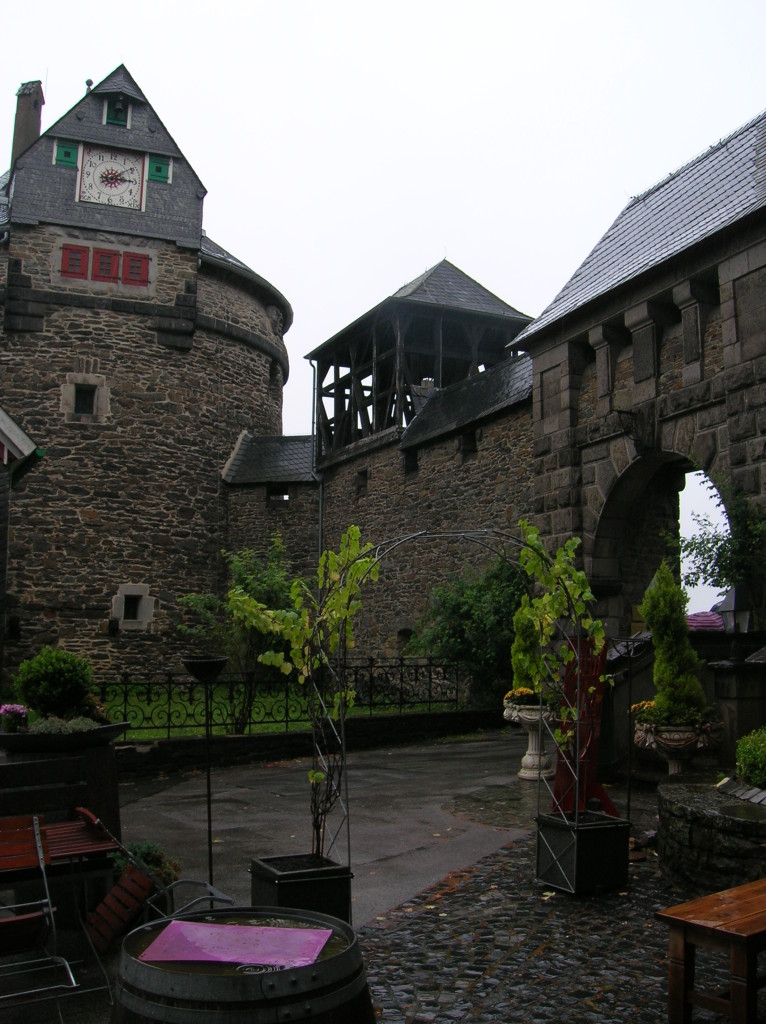 Schloss Burg, outside the town of Solingen (Eileen Bjorkman photo)

It’s a long way down from the top of the tower! (Eileen Bjorkman photo) 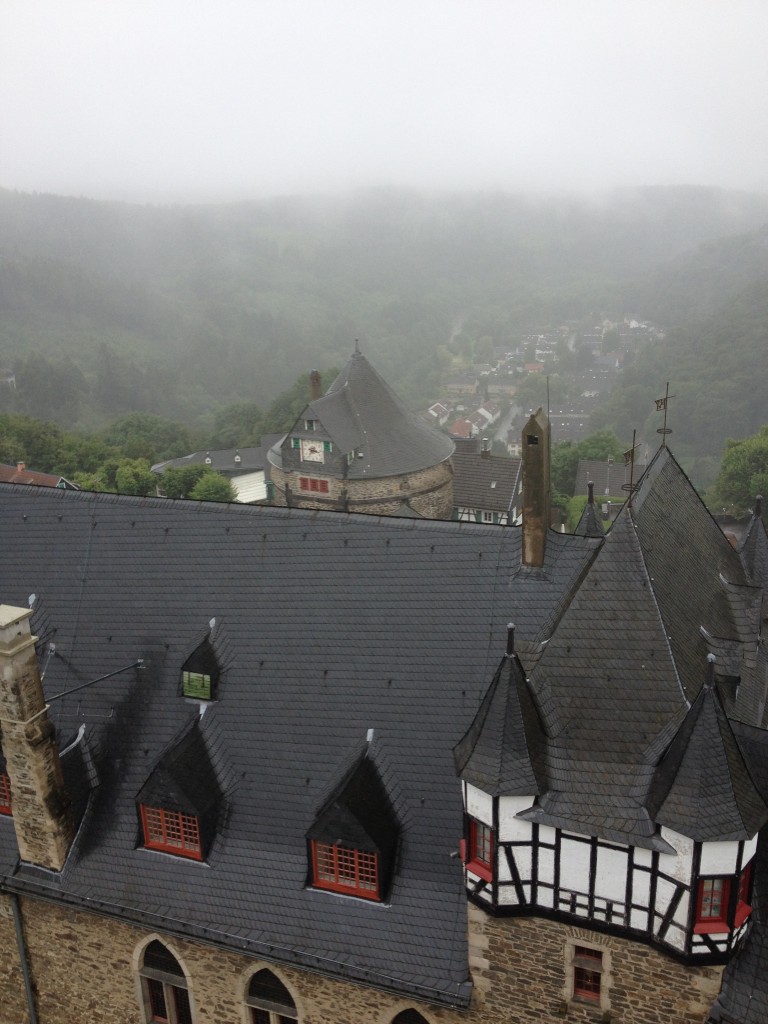 We arrived in Cologne about 5 p.m., in plenty of time for a nice Italian dinner. I have a beautiful view of the cathedral in the center of town from my hotel window. 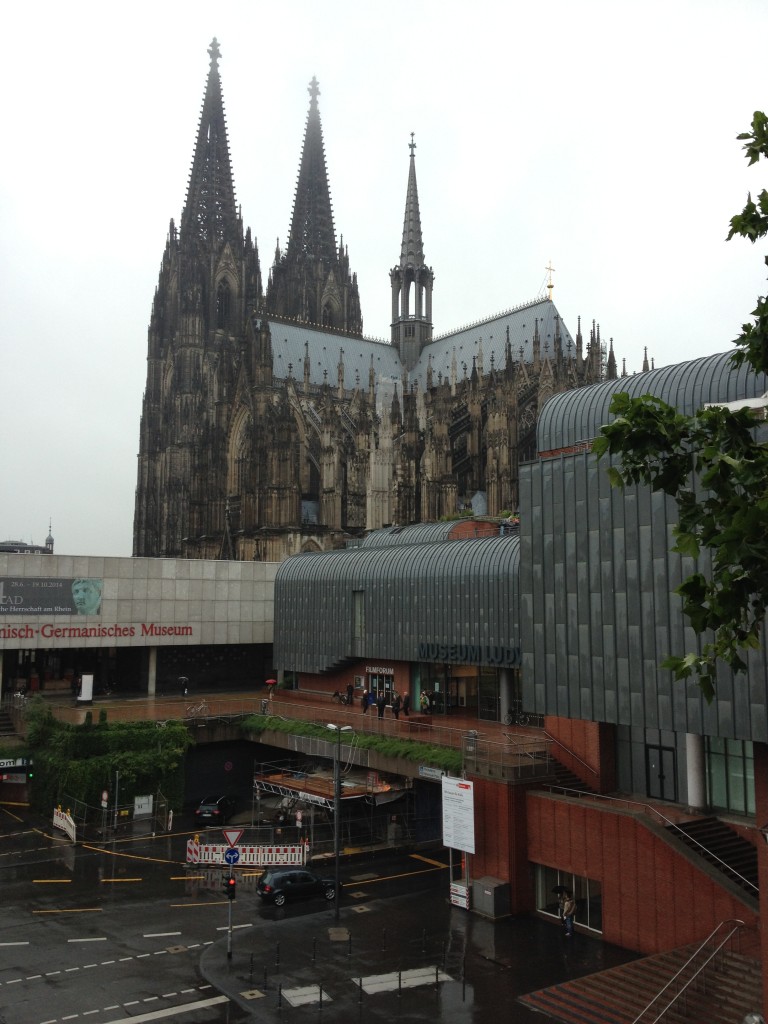 View from my hotel room in Cologne (Eileen Bjorkman photo)

Tuesday (yesterday) we had an easy drive to Hanover, although John added another tie wrap to the Roadster after the door latch on the driver’s side broke. This brings the tie wrap total to 50, or one tie wrap for approximately every 160 miles driven. 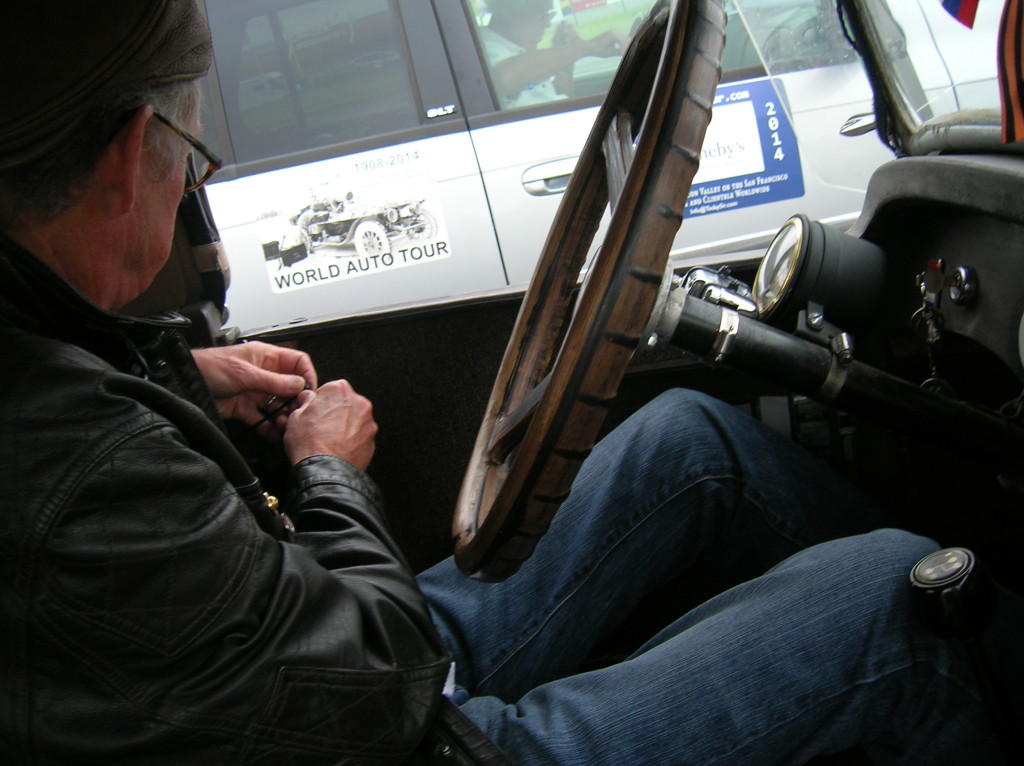 A few hundred feet before our hotel in Hanover, Luke and John spotted a “Pit Stop” auto service chain right down the road, so they took the Roadster to get the tires balanced. Karen and I took the U-Bahn into the town center and began a walking tour, but we were soon distracted by a free jazz concert (small glass of white wine included) at the Market Church. The concert was scheduled to begin at 10 p.m., but the organizers had “pre-poned” it to 9 p.m. because they knew that at 10 everyone in Germany would be watching the World Cup. We listened to two very talented 23-year-old pianists play duets for a half-dozen songs, including “That Old Devil Moon” and several improvisations. One of the pianists was Toms Mikals, from Latvia, and the other was Lennart Smidt, a Hanover native. 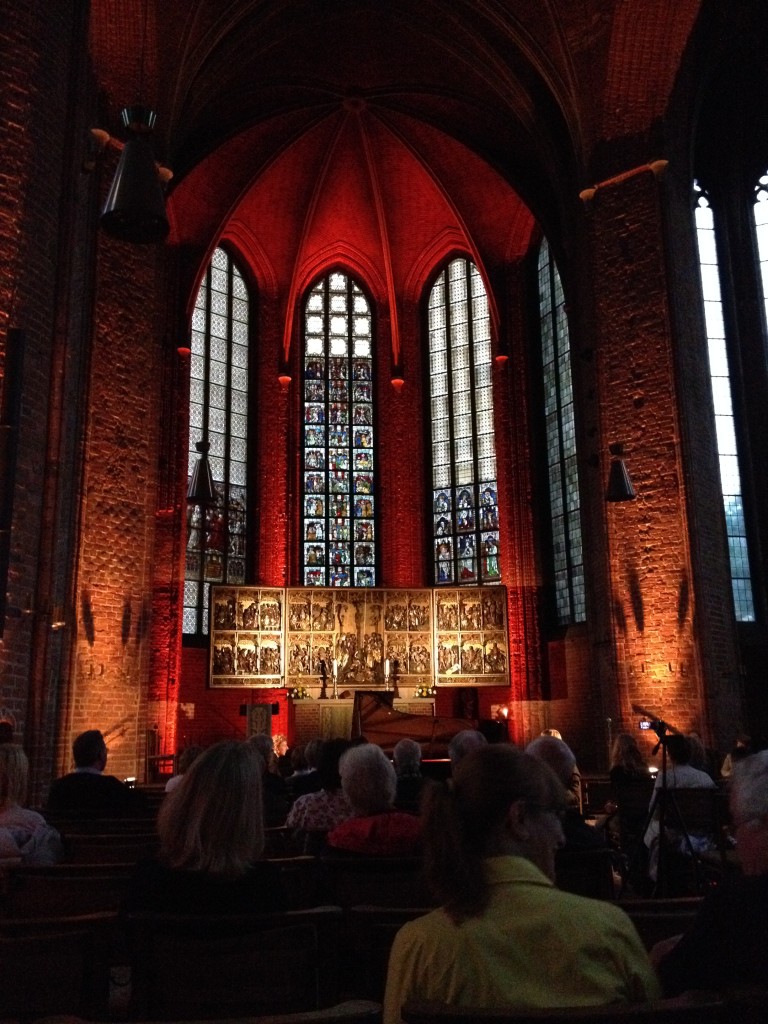 After the concert, we found a nearby bar to watch the World Cup semi-final game between Germany and Brazil. Germany was ahead 1-0 when we arrived, but within a few minutes, Germany had scored three more goals and the atmosphere in the bar went from excitement to an almost disbelief that the game could be going so well.

At halftime, with the score 5-0, we walked back toward the U-Bahn, figuring we would finish watching the game at our hotel. As we passed a bar near the Market Church where the concert was held, we spotted the two young pianists and went over to tell them how much we enjoyed their playing. Lennart Smidt’s fatherwas also there, and it turns out that he plays the organ for the Market Church and has also played a concert in Seattle. Small world!

When we arrived at the train station, electronic signs indicated that trains were running, but the station was devoid of people, creating an eerie contrast to the supercharged crowds just a few feet above us. We had just missed a train on the line we needed, and the next one wouldn’t arrive for 30 minutes, so we decided that was a sign for us to stay in town, and we found a rocking Irish Pub and settled in to watch Germany finish trouncing Brazil with a final score of 7-0. We’re planning to pick up some German flags or t-shirts to watch the final game in Paris in Sunday. Go Germany!

Tomorrow we drive 271 km to Chimay, Belgium, where we’ll enjoy chocolates and beer until Saturday. From there, we push into France and arrive on Sunday in Paris — the World Auto Tour Leg 1 final destination.