On this day in 1908, a significant event occurred in Siberia that very few people even noticed until many years later. It occurred near Tunguska, which is about 400 miles north of Tulun, the town where John lost the bag containing his papers.

At 7:14 a.m. on June 30, 1908, as the Thomas Flyer was in Omsk and the Protos was in Kansk, an object 200-600 feet across exploded at about 61 degrees north latitude and 102 degrees east at an estimated altitude of 3-6 miles. The explosion, which measured about 1,000 times the size of the atomic bomb at Hiroshima, killed 80 million trees over an area a little smaller than the state of Rhode Island. Due to the remote location, no human fatalities were recorded; however, the shock wave reportedly broke windows up to several hundred miles away. The object was originally believed to be an asteroid or a comet, but more recent studies indicate that it may have been a meteor. You can visit Wikipedia to learn more. The crater and devastation from the object are still visible, as you can see in the Google Earth image below. 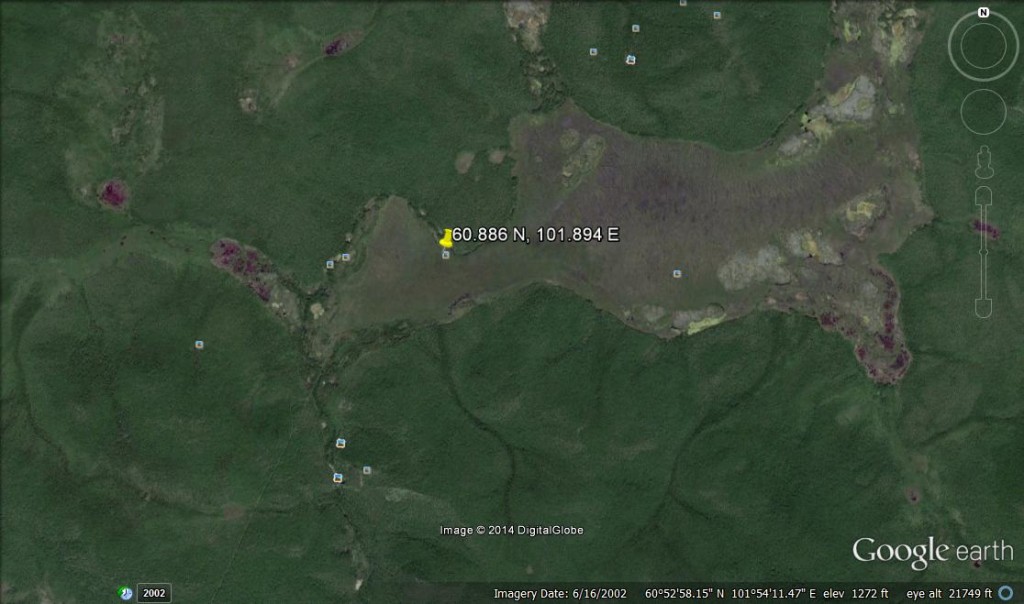 Today began like many our of days, with a trip to an auto parts store that we had noticed while walking to our restaurant last night. But it was a small shop, and the clerk didn’t have a suitable rear shock absorber in stock. He suggested we try the Vilnius auto mart, a place similar to the auto heaven in Novosibirsk, but the Vilnius mart is closed on Mondays. With nothing left to do regarding the Roadster, we went on our walking tour of Vilnius. 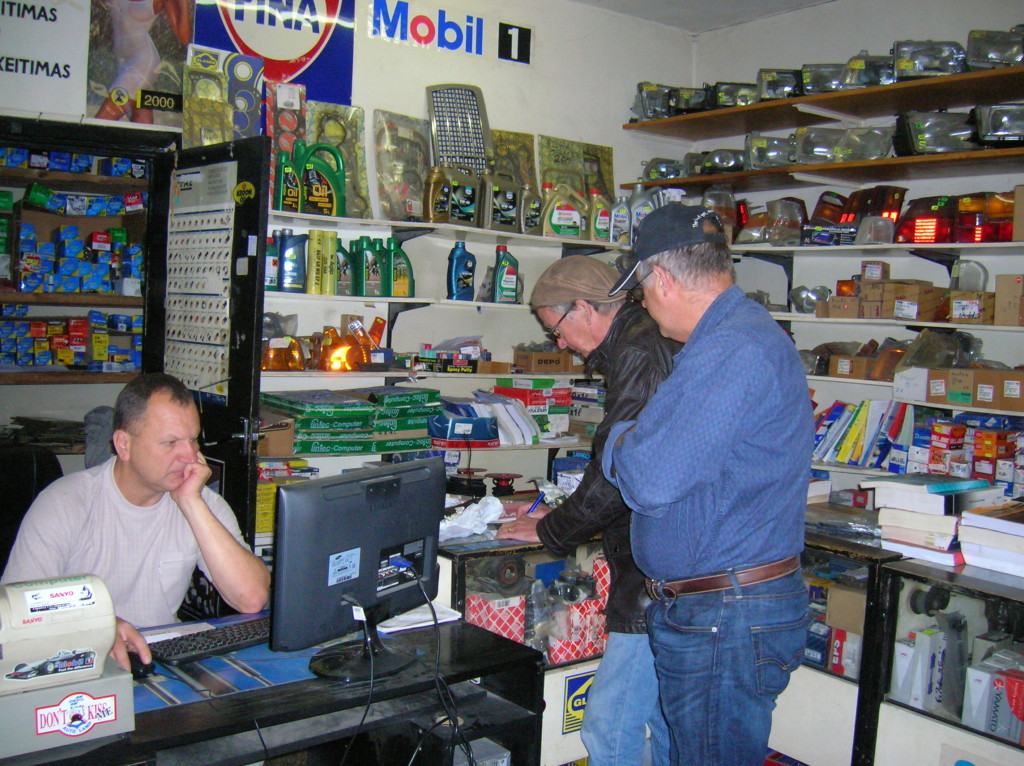 We spent most of the tour in the Old Town section of Vilnius, where we saw many old Catholic and Russian Orthodox churches that have been restored since Lithuania gained independence from the Soviet Union in 1990. The Catholic church below is located at Vilnius University. 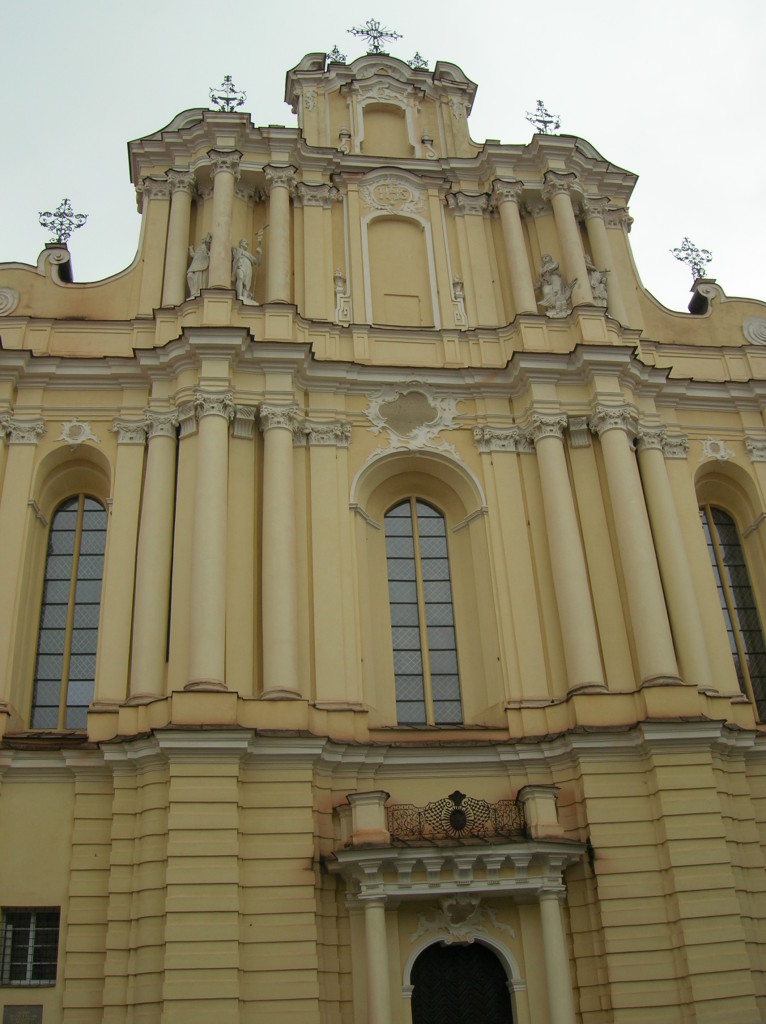 Near the university, we also had a chance to see the presidential palace, which is the equivalent of the U.S. White House. 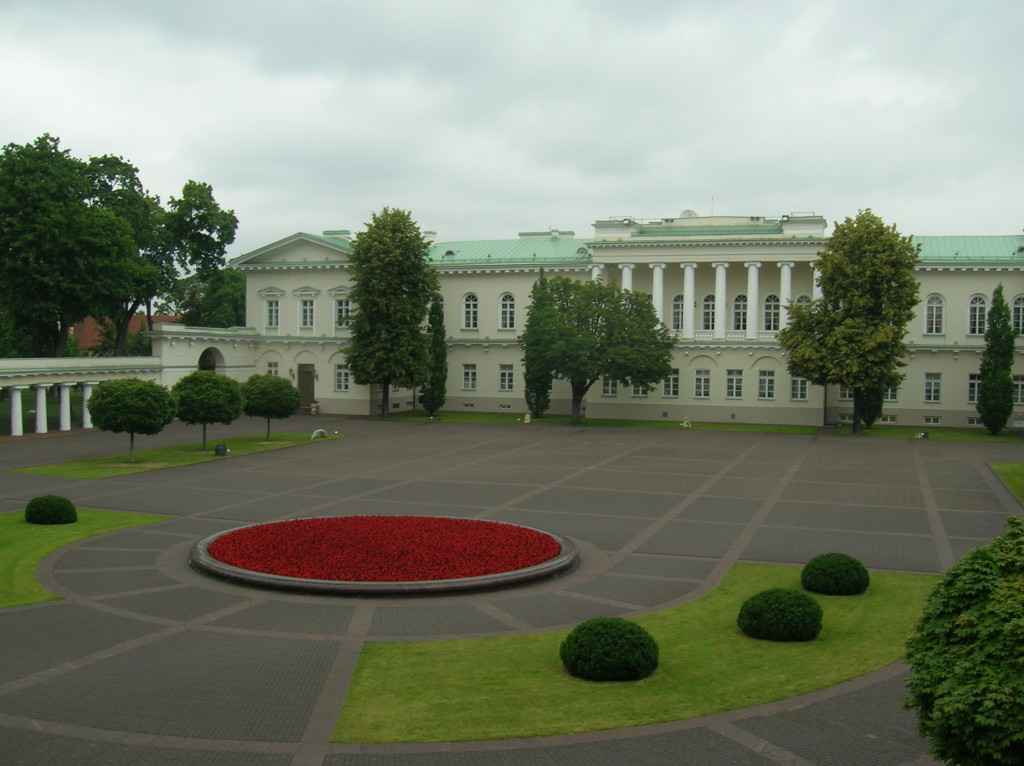 The highlight of the tour for me was our visit to the Uzupis Republic, sort of a bonus country for our trip. The area is a self-proclaimed republic of artists that has its own constitution, president, bishop, and anthem.

Welcome to the Republic of Uzupis (Eileen Bjorkman photo)

As you might expect, there are plenty of small shops and art galleries to peruse in Uzupis, such as the one below that offered some good advice along with art displays. 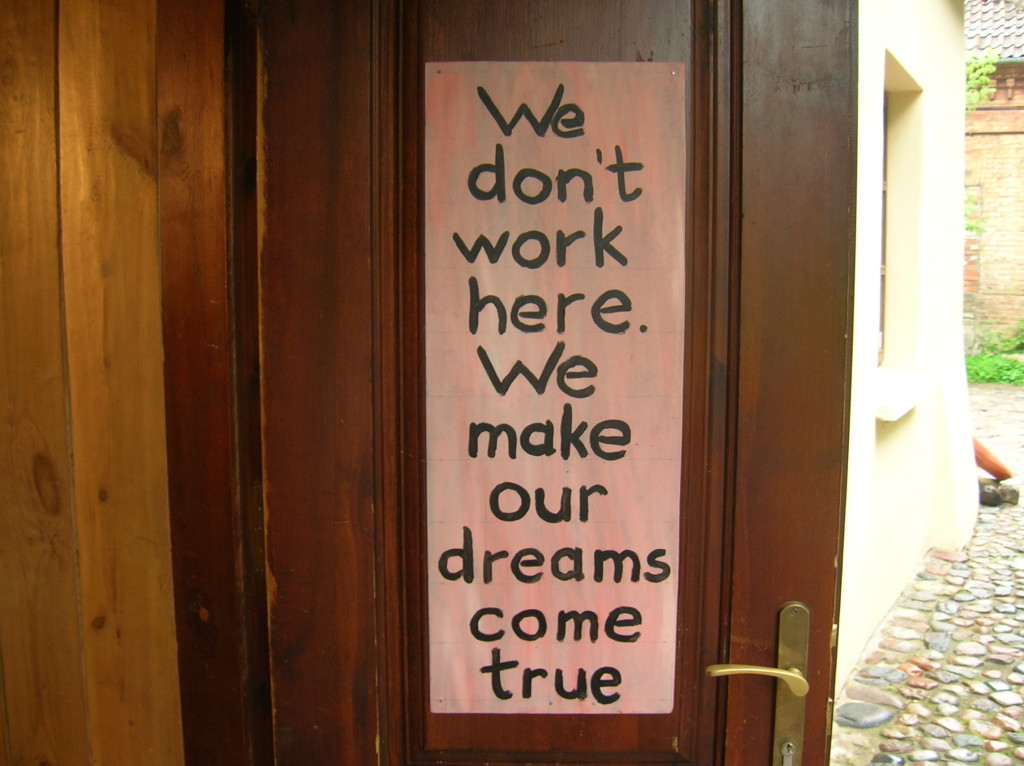 Artistic advice that everyone can follow (Eileen Bjorkman photo)

We also saw a wall that displays plaques with the Uzupis constitution in different languages (I forgot to count how many). Here are some of my favorites:

5. Everyone has the right to be unique.

10. Everyone has the right to love and take care of the cat.

16. Everyone has the right to be happy.

24. Everyone has the right to have faith.

38. Everyone has the right to not be afraid. 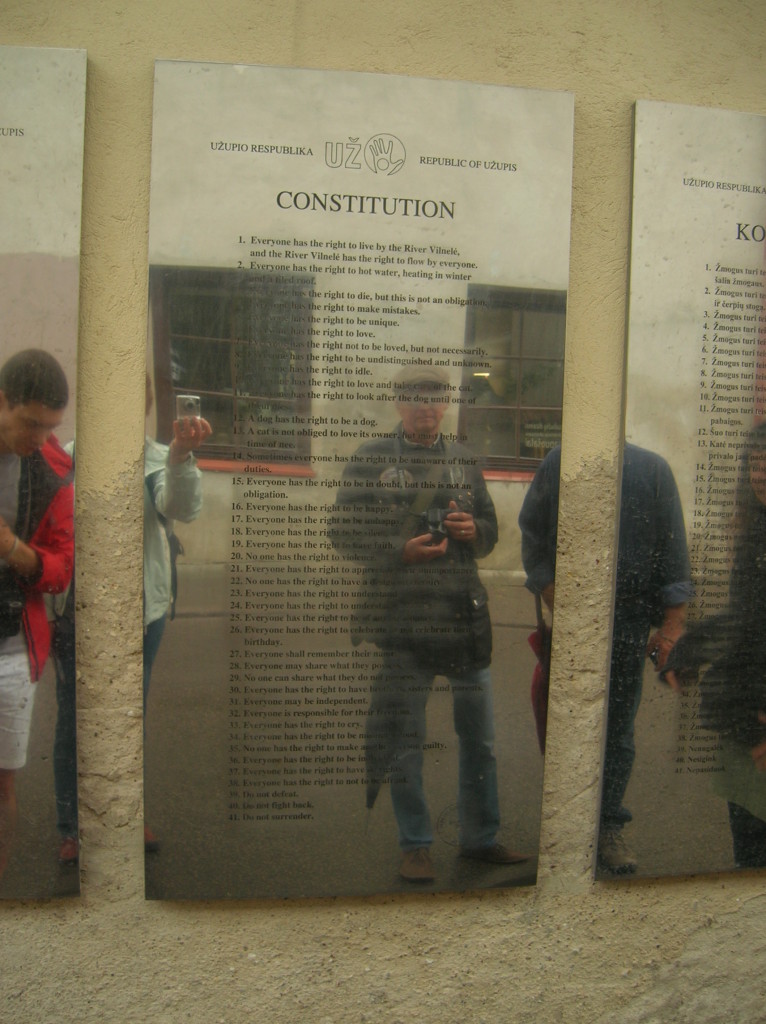 After the tour, John returned to the hotel to try installing one of the old front shock absorbers to replace the broken rear shock absorber. The replacement shock is too short to use the spring that was installed on the old rear shock absorber, but it’s better than nothing. As far as I know, there are no new tie wraps on the car as a result of this latest installation. 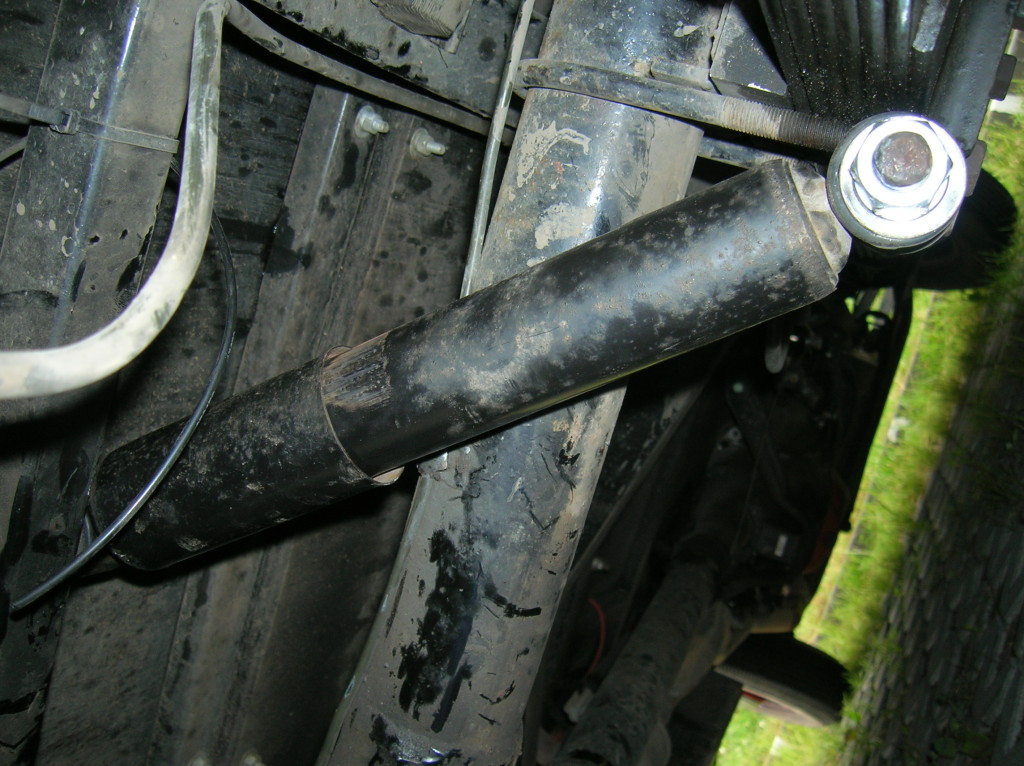 Old front shock now being used as a rear shock — yes, John and Luke are getting desperate (Eileen Bjorkman photo)

About 4 p.m. our guide, Karen, rode with Leo in the Envoy to find a car wash and they instead found a garage that said they might be able to help with the shock absorber. John, Luke, Karen and I walked back over to the shop with one of the old front shock absorbers and the man in the photo below, Marius, said he might be able to find something by tomorrow. He thinks there is a Mercedes-Benz shock similar to the one the Roadster needs. 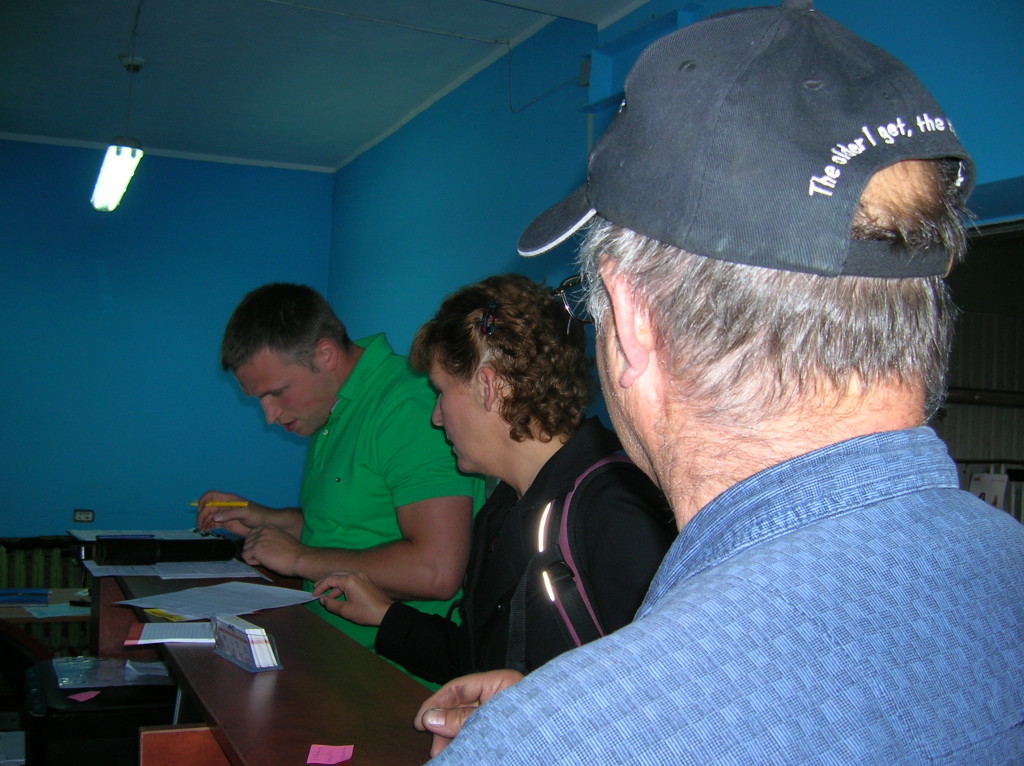 Tomorrow we’ll first check to see if Marius had any luck finding a suitable shock and, depending on what happens with that, we may or may not visit a military vehicle museum before we start our short 105 km drive to Kaunus.