When George Schuster and the Thomas Flyer arrived in Tomsk on June 27, 1908, the Flyer had again caught up with the German Protos, but the Americans were still unable to take the lead. The Protos had arrived on morning before the Flyer arrived, but the German team delayed their departure until the following morning for some repairs, making it possible for the Flyer to catch up. But due to various logistics issues, the American team wasn’t able to leave until 3 a.m. on June 28, so Schuster continued to drive all day and night to catch the Germans.

During the portion of the trip from Irkutsk to Tomsk, the 1908 racers had relatively few problems. However, the Flyer had to be pulled out of about five feet of water when crossing a river near a village because so many curious bystanders had crowded onto the small improvised ferry used for the crossing that the raft sank. But the villagers came to the rescue and pulled the Flyer to shore.

The Flyer also encountered some problems due to the road conditions, and the New York Times reported that, “The tremendous bumping the car had met with on part of the road had bent the spring hanger.” As a result, Schuster ordered his guide, Captain Hansen, and the Times correspondent to take the train to Tomsk to lighten the load until they could get the spring hanger repaired. After pointing this episode out to John at lunch today, he briefly considered putting Luke on a train to Tomsk as well.

We left Krasnoyarsk this morning about 7:30 for our 400+ mile drive to Tomsk. We are now officially in Western Siberia, and I’ve noticed a shift in the terrain from forested hills to flatter country with shrubs and scrubby trees that look like small aspen. 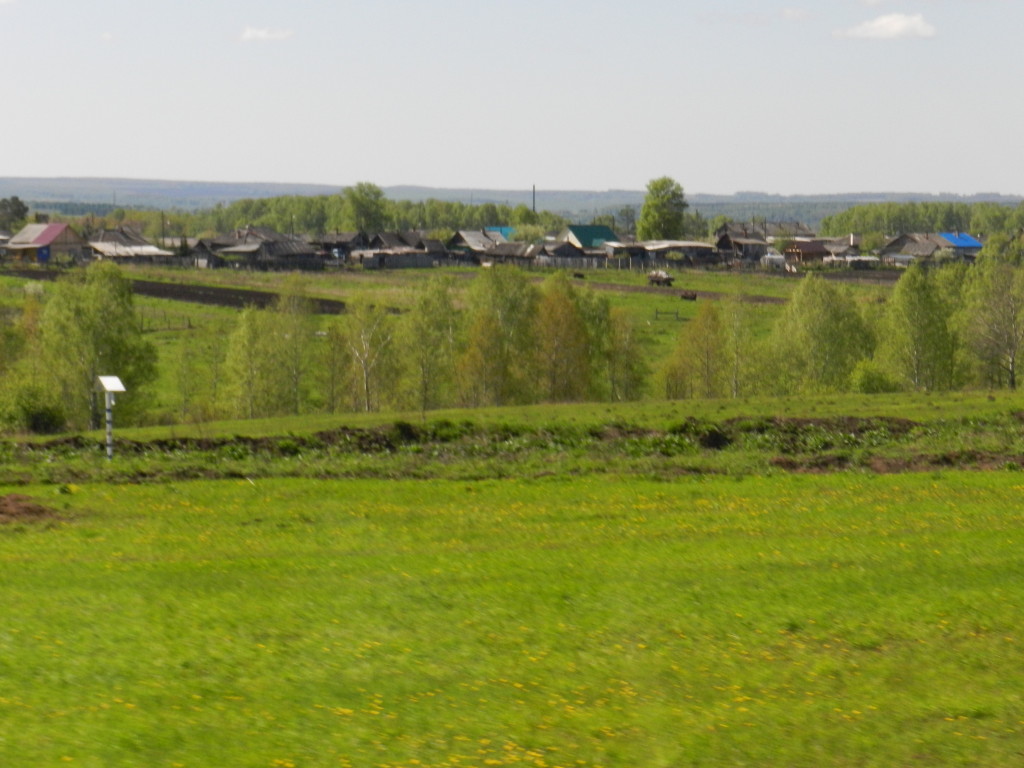 We had excellent roads for driving this morning and we were nearly at the half-way point at lunch time. About 1:45, we arrived in the town of Mariinsk and followed the signs that pointed to Tomsk, which put us onto a different route than the one Ksenia had planned to use. But my map showed a big fat highway line to Tomsk that looked significantly shorter than the planned route, so between the map and the signs in Mariinsk, we decided to take the shorter route.

Everything was fine for the first 20 minutes on our new route, and then we ran into some awesome potholes. Another 20 minutes later, we considered turning back, but then Ksenia asked someone stopped by the roadside when the road would improve and he said another 30 km or so, so we decided to stick with it. 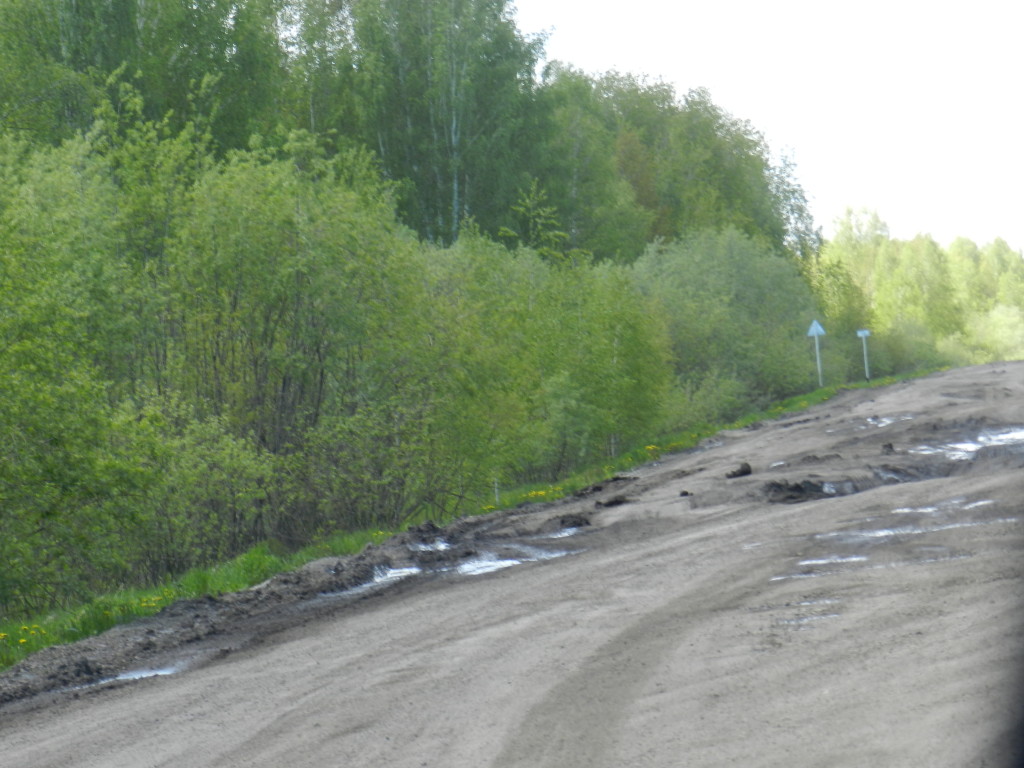 We bounced around for another two hours, but I’m pretty sure the route we took was probably closer to the route used by the 1908 racers as they drove to Tomsk. We also traveled through many small villages we wouldn’t have seen otherwise. One thing that amazes me is how many of the houses in the small villages we’ve passed through have satellite TV. It’s a wonderful juxtaposition of an old way of life with new technology. 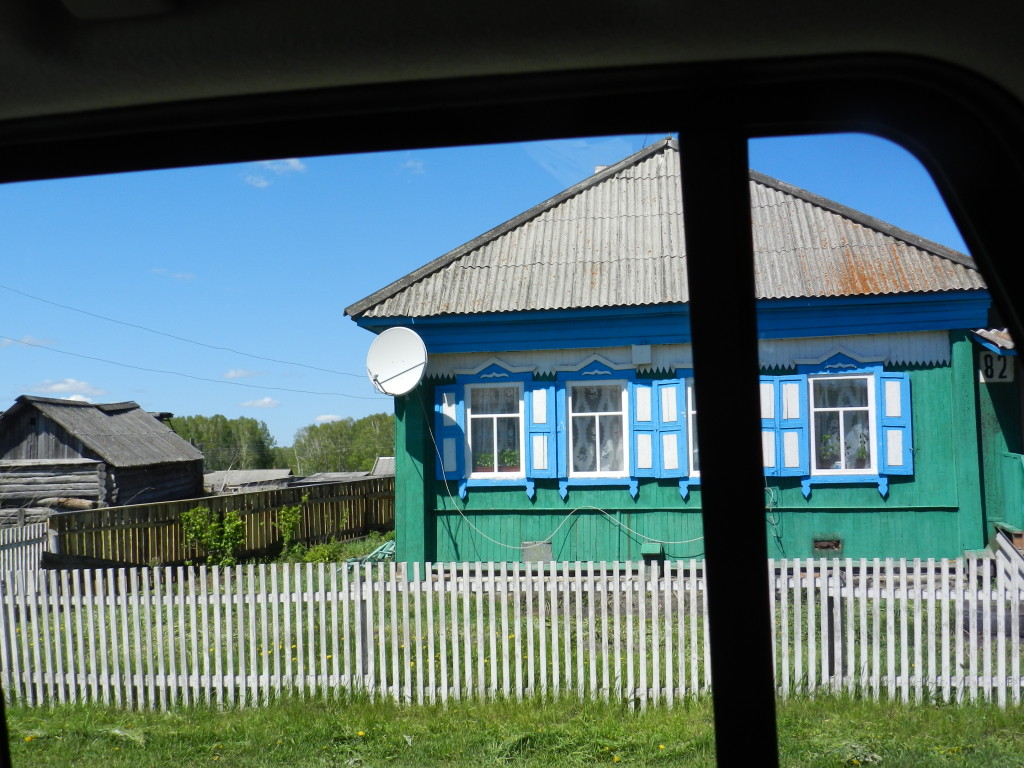 We arrived at our hotel about 7 p.m., about the same time we probably would have arrived if we’d stuck with the original route, which was longer, but probably easier to drive. But we all agreed that the route we chose was much closer in spirit to the original race!

Tomorrow morning we head to Novosibirsk, a short 268 km drive that we hope will end with a box of four new shocks for the Roadster waiting for us.

It’s been a busy three days without much Internet connectivity, but we arrived in Krasnoyarsk about 12:30 this afternoon (Sunday), so I’m back online.

Last night, we had some spontaneous hosts in the town of Kansk. The woman signing John’s car in the picture below is named Irina, and she is married to Gadzhi, the gentleman who owns Zhemchug, translated Pearl, the excellent restaurant where we dined. After we ate, Irina asked if John was the one who owned “the car.” By now, we all just call the 1928 Roadster “the car,” because it’s the one that attracts all the attention! Ksenia translated Irina’s desires and said, “She is very proud of her hometown of Kansk and she would like to sign the car.” How could John refuse that offer? 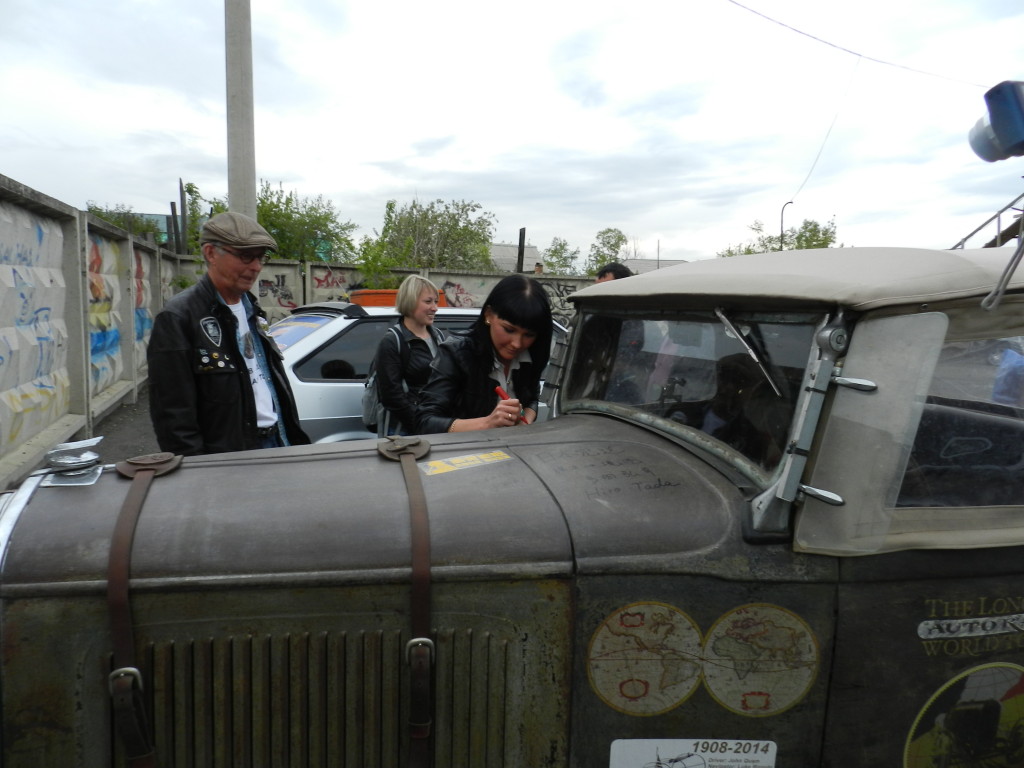 We walked 100 yards back to the parking lot where the cars were secured, where we were joined by Irina, Gadzhi, and three other Russian friends shown below. 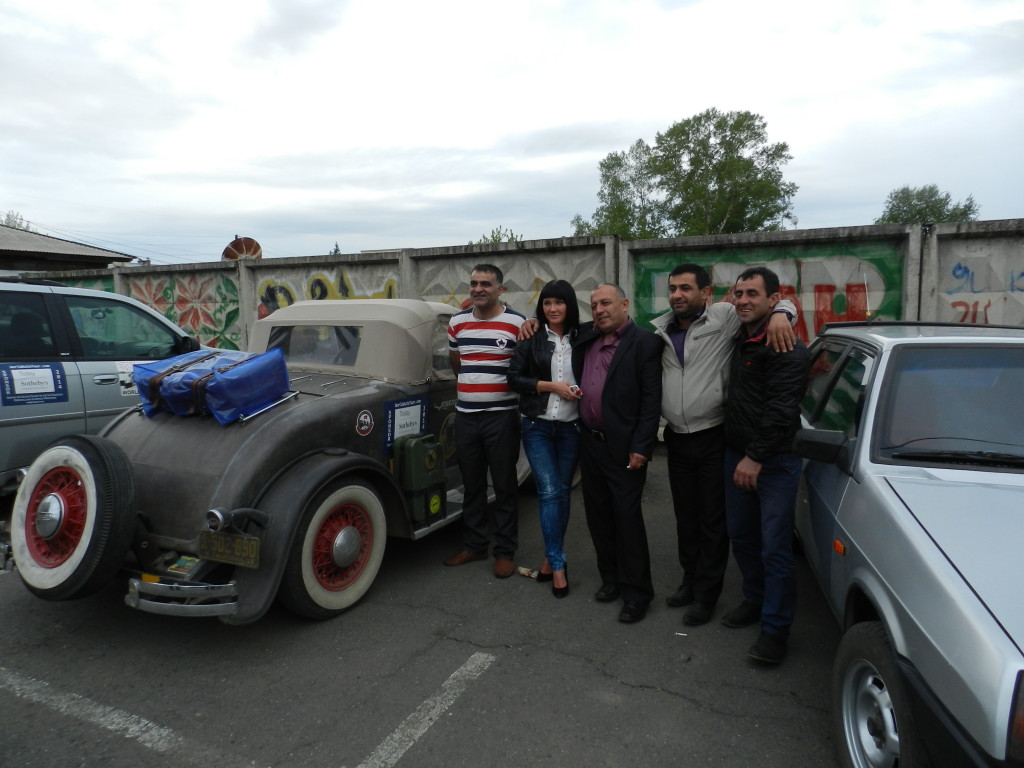 After the signing, Irina and Gadzhi insisted that we come inside a tent outside the restaurant for some champagne and chocolate. We had many toasts as the ten of us shared three bottles of champagne and two delicious chocolate bars. Our new Russian friends wanted us to stay for vodka shots, but we begged off so we could get an early start today. If you ever get to Kansk, be sure to stop by Zhemchug/Pearl for some terrific hospitality — they love foreigners! 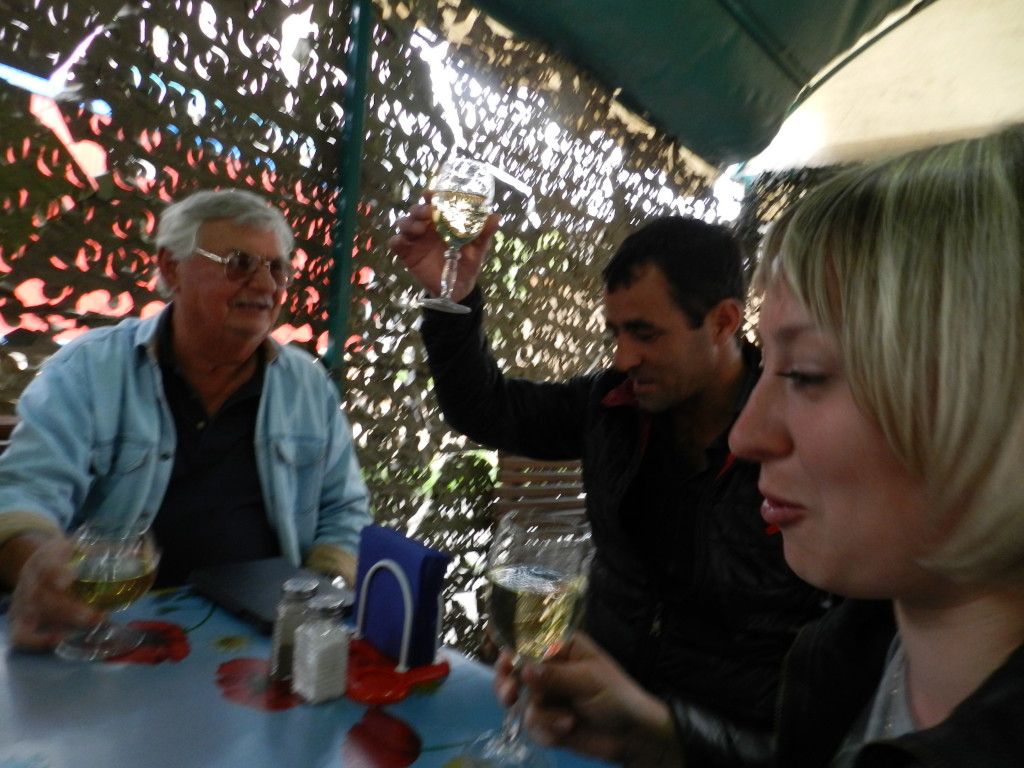 Our drive from Irkutsk to Tulun on Friday started with the realization that we were about 3,000 miles from Moscow, according to the sign in our hotel — it actually says “5039 km.” At this point in the trip, 3,000 miles doesn’t sound very daunting any more. 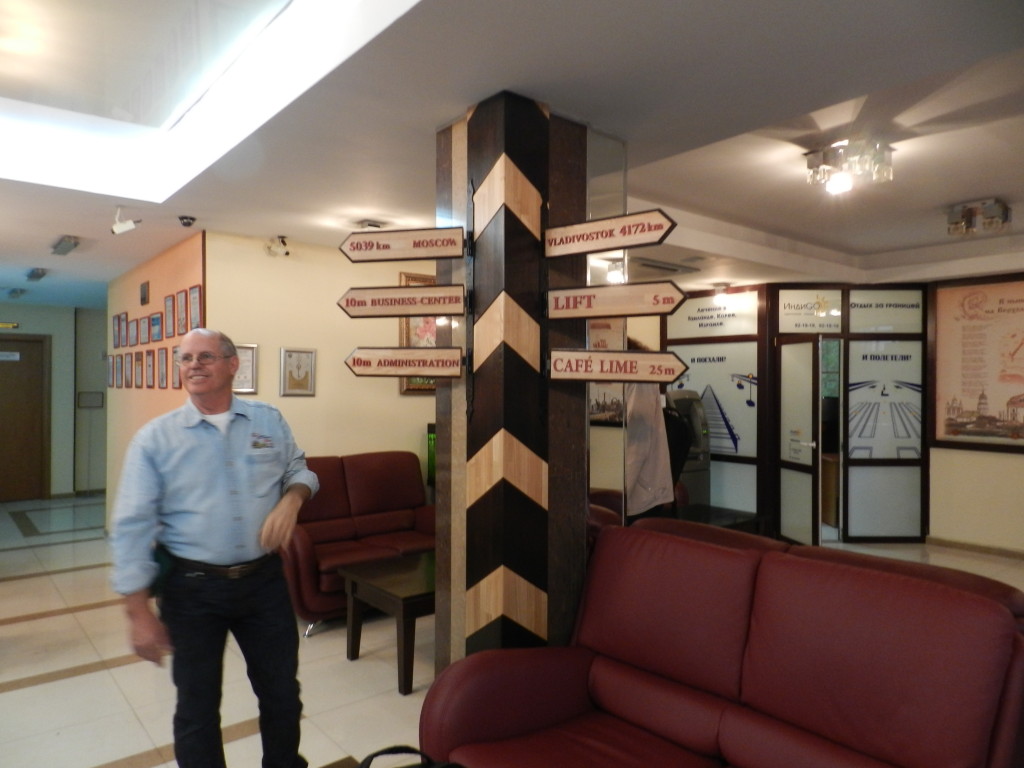 It was a rainy day, and we followed the Trans-Siberian Railway for much of the trip, just as the 1908 racers did. The terrain was mostly rolling hills, with a mix of forested areas, pastures, and plowed fields. Today, we stopped for a train for the first time, and I got this nice shot as the train approached the crossing. 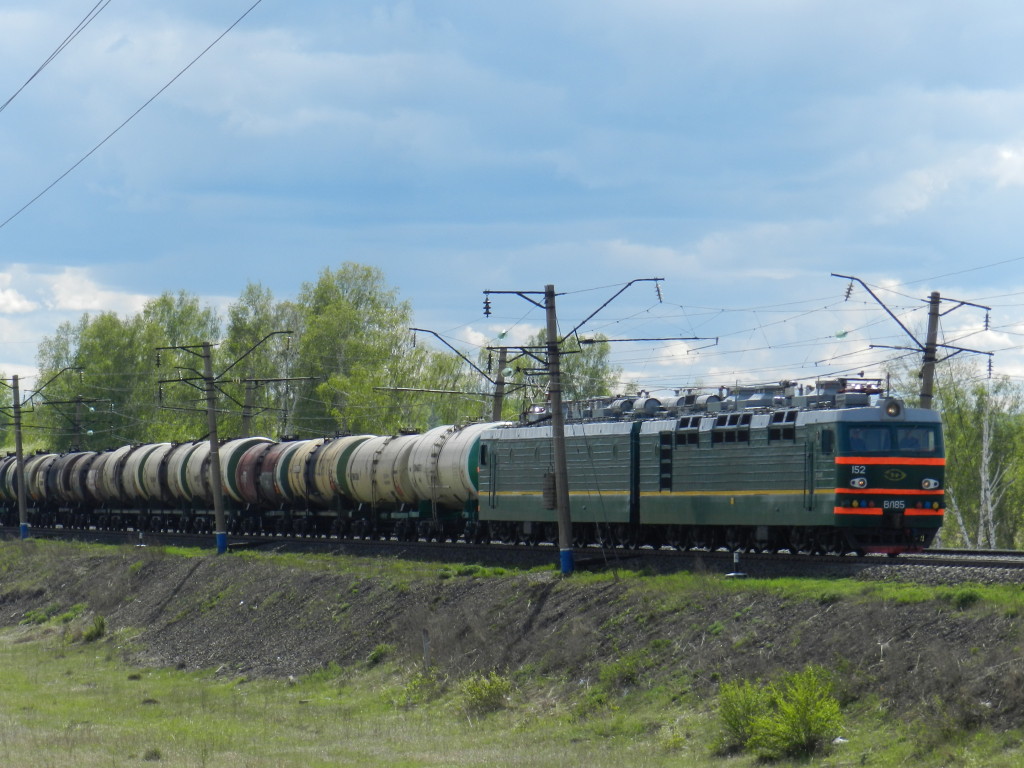 Railroad crossing on the way to Tulun (Eileen Bjorkman photo)

As we drove along, I noticed many buildings painted in IKEA blue and yellow colors. Maybe someone from IKEA made a good deal with a paint dealer in Russia? Here’s some buildings behind our hotel in Tulun. 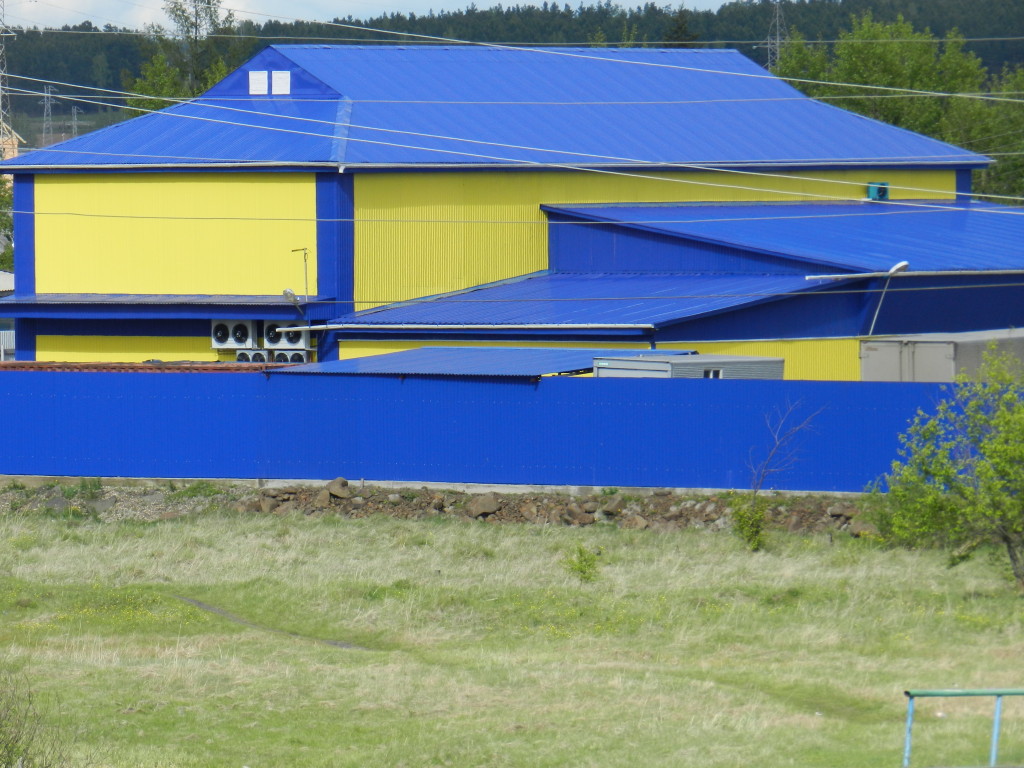 We also got some bad news on Friday. There was a problem with Russian Customs in Moscow when the package with the shocks for the Roadster arrived, and the package was returned to the U.S. So Luke had to stay up late once again to get another package sent over, which we hope won’t have the same problem. The new shocks are being shipped to Novosibirsk, where we arrive on Wednesday. On the other hand, the Roadster hasn’t blown another brake light fuse, so maybe that problem has finally been fixed for good. 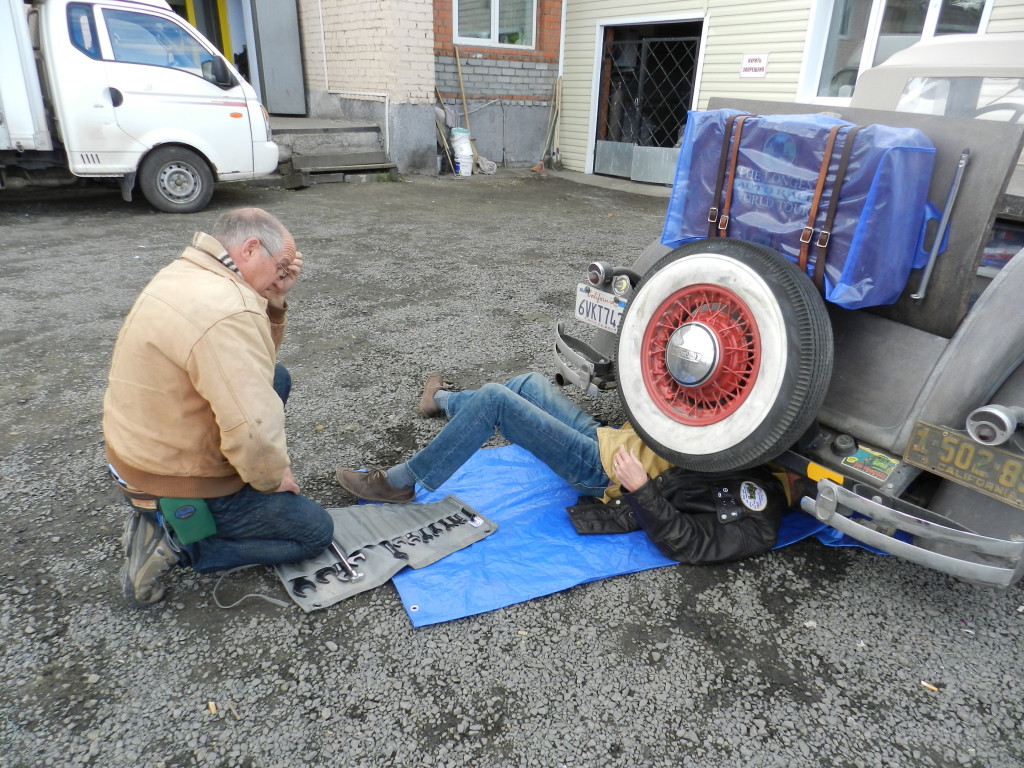 Saturday morning, after singing Happy Birthday in Russian over a cell phone to Luke’s brother, Tony, which won’t win any Grammy awards, trust me, we headed off for Kansk. We had a very slow morning over roads under construction, going only about 30 miles in the first three hours. We passed this monument on the way into the town of Sherberta, and Ksenia said that the monument was used to indicate Soviet-era collective farms. 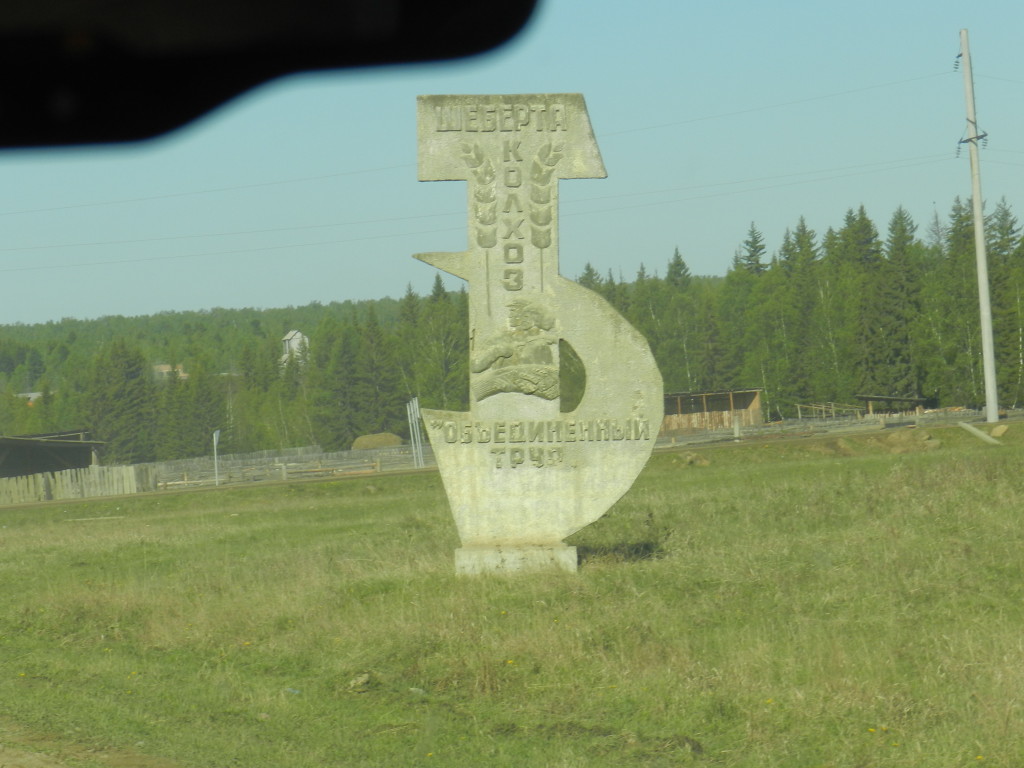 After about three hours, we reached better roads and the pace picked up, and we began to anticipate a mid-afternoon arrival in Kansk. But we always seem to find a way to extend our day, and yesterday was no exception.

About 12:30, at a fueling stop near the small town of Alzamay, John discovered that a bag containing his passport and other important papers was missing. After tearing the Roadster apart, we concluded that it had been left in Tulun. Ksenia immediately got on the phone with the hotel, and after the security folks reviewed video from the parking lot that morning, John realized that the bag had probably been left on the driver’s side running board by accident and then fell off as we departed the hotel. We pondered what to do while Ksenia made dozens of phone calls to Tulun, to Mir Corporation, and to the police. At least we had managed to pull into the nicest truck stop we have seen so far, complete with two mini-markets, a café, a hotel, and clean flush toilets, so it wasn’t a bad place to hang out for a few hours on a sunny 70 degree afternoon in Siberia. 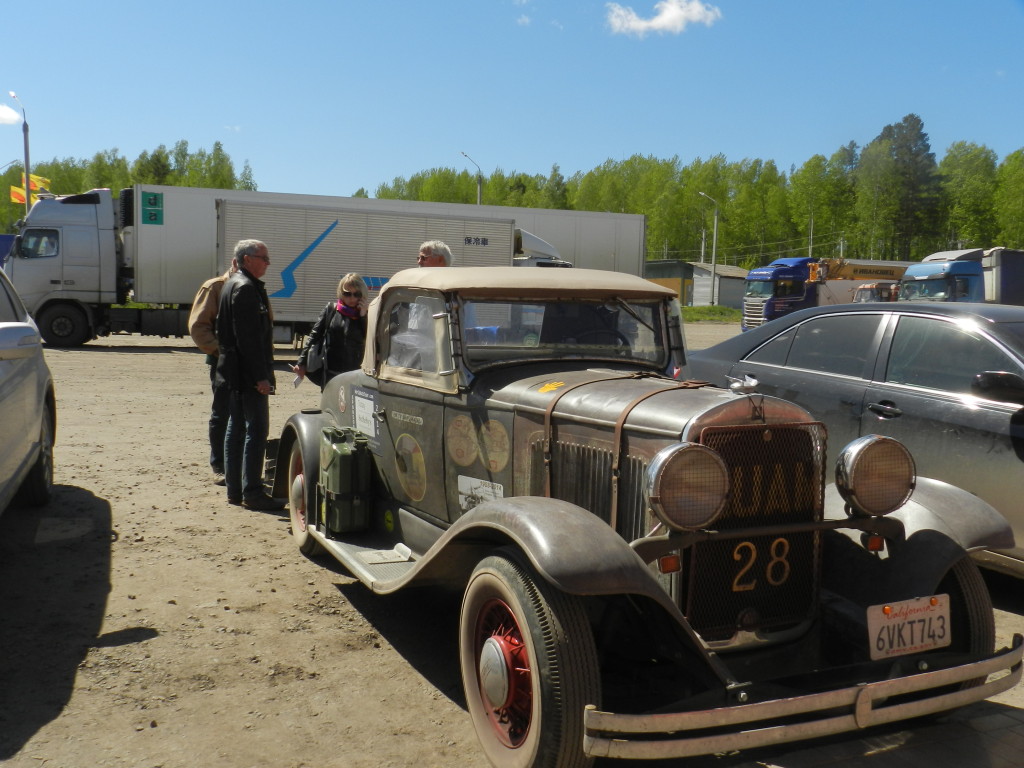 John called the consulate in Ekaterinburg and they were very helpful, saying that he can get an emergency passport when we arrive there. In the meantime, we drove into Alzamay to file a police report to help with the other missing paperwork. While John and Ksenia took care of that, Luke and I admired this Kermit-the-Frog colored troop carrier that, based on my limited Cyrillic and Russian skills, I believe was used for counterterrorism operations at some point. 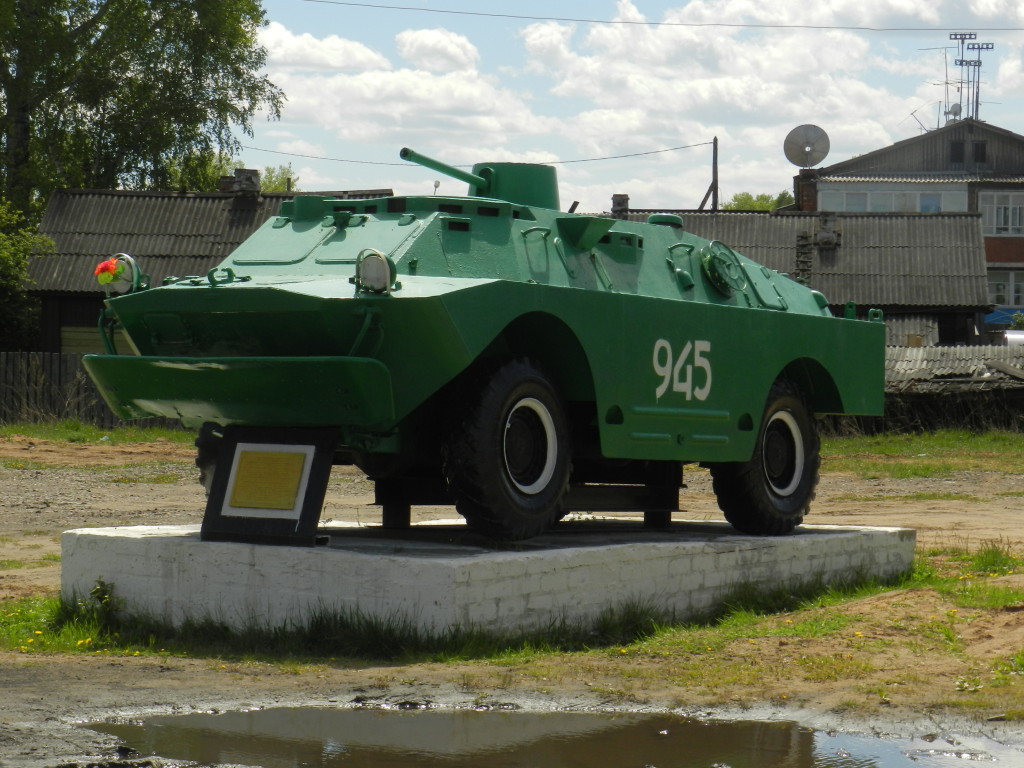 Outside the police station in Alzamay (Eileen Bjorkman photo)

The police in both Tulun and Alzamay have been very helpful, and we are still optimistic that John’s papers may yet be located. But with the help of Ksenia and Mir, we should be able to recover from this before we cross the Russian border again on June 28.

Today, we were thankful for an uneventful 140 mile drive to Krasnoyarsk. We have the day off tomorrow to rest, run errands, and work on recovering John’s paperwork. On Tuesday, we have one of our longest drives of the trip, 603 km to Tomsk, but we believe the roads will be much better!